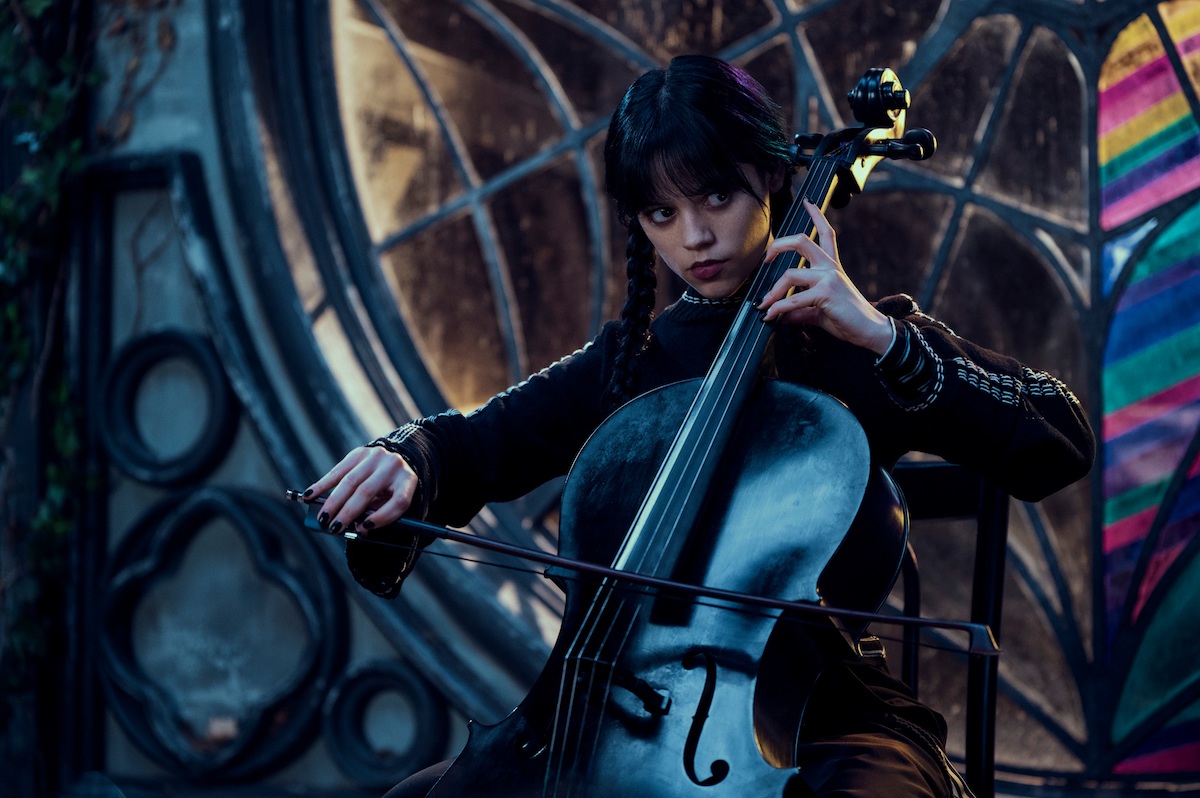 Wednesday Episode 6 brings Wednesday Addams (Jenna Ortega) one step closer to solving who the murderous monster is in Jericho. After learning about the death of a Jericho native at the hands of a Nevermore student, Wednesday uncovers a shocking revelation about the Gates Family. Could they have something to do with the monster plaguing the town? Episode 6 of the Netflix series explains.

‘Fire Will Rain’ is a connection to Joseph Crackstone

At this point, we know Joseph Crackstone (William Houston), Jericho’s founder and all-around bad guy, hated outcasts like Goody Addams. At the end of Wednesday Episode 5, someone burns “Fire Will Rain” into the grounds of Nevermore Academy. Episode 6 reveals those words share a connection with Crackstone.

Believing she’ll find more answers about the monster, Wednesday goes to the Crackstone Crypt begrudgingly. Little does she know it’s for an impromptu birthday celebration. While she despises the gathering, Wednesday encounters another clue while inside. Inscribed in Latin on the wall are the same words that were burned into the school grounds: “Fire Will Rain.” Wednesday still isn’t sure what that means at this point, but Goody shows her the way in a vision.

Is Laurel Gates the monster in ‘Wednesday’?

The monster killing people in Jericho was hiding out in a cave previously. Now, it’s new home is the Gates’ Mansion, the former home of Garett and his family. As we see in Wednesday Episode 5, Garett Gates (Lewis Hayes) was killed by a young Morticia Addams.

After his death, both of Garett’s parents died and his sister, Laurel, is presumed dead, too. However, episode 6 of Wednesday hints at Laurel still being alive. That idea becomes even clearer when Mayor Noble Walker (Tommie Earl Jenkins) gets hit by an unknown person in a car. Leave it to Wednesday Addams‘ detective skills to find that very car in the garage of the Gates Mansion.

Someone — or something — has been using the mansion as a hideout, as evidenced by the freshly blown out candles surrounding the creepy altar to Joseph Crackstone. Could Laurel Gates still be alive and the one behind the murders in Jericho?

Wednesday Episode 6 does its best to point the finger at Laurel Gates, who we have yet to officially meet. However, a few other details in this episode hint at another character being Wednesday‘s big bad.

We haven’t seen much of Professor Thornhill (Christina Ricci) in the Netflix series, but she pays a lot of attention to Wednesday in this episode. After learning Wednesday saw the mayor get hit by a car, Thornhill gifts her with a copy of Mary Shelley’s Frankenstein. That’s a weird gift for a botany teacher to gift a student, especially when there’s a monster going around killing people and collecting their body parts a la Dr. Frankenstein.

As if the …read more

Each Beatles album has several standout songs. Not only do fans have their favorites, but The Beatles had their own standouts from what they created. There are many great songs from Abbey Road, but Paul McCartney believes the album’s biggest hit is his favorite.  Paul McCartney says ‘Come Together’ is his favorite ‘Abbey Road’ song […]

Among many things, Orlando Magic guards Cole Anthony and Markelle Fultz will bring a quality the team has lacked for most of the season: pace. It didn’t take them long to bring that after making their return in Wednesday’s home loss to the Atlanta Hawks. Anthony (19 points, 6 rebounds and 3 assists in 28 […]

CELEBRITIES BORN ON THIS DAY: Jessica Camacho, 40; Garcelle Beauvais, 56; Tina Turner, 83; Rich Little, 84. Garcelle Beauvais (Photo by Kevin Winter/Getty Images)  Happy Birthday: Put your time and energy into something that leads to monetary, physical or emotional gains. Speak up about how you want things to unfold this year and discuss your […]