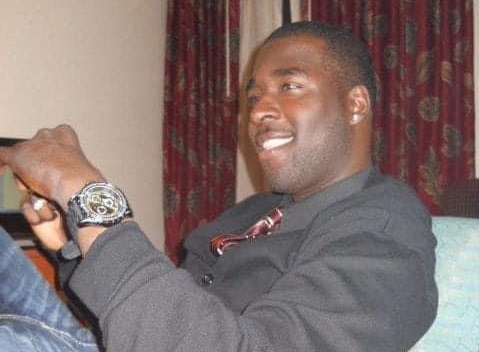 SAN LEANDRO — A new public park could be built in memory of Steven Taylor, a Black man fatally shot by police as he held a baseball bat inside a Walmart store while having a mental health crisis.

The proposed park at the San Leandro Marina would also memorialize others who died at the hands of police, such as Oscar Grant in Oakland and George Floyd in Minneapolis.

“This isn’t so much of a park, it’s more of a memorial,” City Councilman Fred Simon, who is spearheading the effort to create it, told fellow council members on Tuesday.

Simon said he would like the park to be built within 15 months.

On April 18 last year, a police officer shot and killed the 33-year-old Taylor inside the Walmart at 15555 Hesperian Blvd. after dispatchers got a call that he was walking around swinging a baseball bat and appeared threatening to customers.

The officer involved, Jason Fletcher, was subsequently charged with voluntary manslaughter and has since retired from the department.

Fletcher was the first Bay Area law enforcement officer in more than a decade to face charges in the death of a civilian while on duty; the previous one was former BART Officer Johannes Mehserle, who shot and killed Grant on New Year’s Day 2009 at Oakland’s Fruitvale BART station.

The case against Fletcher is pending. His next court date is March 10.

The preliminary park proposal calls for a stone memorial to Taylor surrounded by eight benches in a circle with each having a theme — reflection, remembrance, healing, justice, learning, empathy, strength and caring.

“The development of this park is to help heal our community, to reflect on what has occurred and to educate our community,” Simon said.

Other features of the “Steven Taylor Sanctity of Life Park” would be boulders with inscriptions that memorialize people killed by police and a touchscreen kiosk where visitors can access information on police force and mental health services.

There also might be a statue of an individual “standing up or kneeling for what is right,” Simon told the council.

The “kneeling” is a reference to former San Francisco 49ers quarterback Colin Kapernick, who sparked a national debate on racial injustice when he began kneeling during the playing of the national anthem before football games.

“I really think this is part of the process of restorative justice,” Councilwoman Corina Lopez said about the park idea. “We have to really acknowledge that we have had in San Leandro on many levels a history of racism for many people of all colors. That we are coming out of this. That we are transforming.”

Among those welcoming the park proposal is Addie Kitchen, Taylor’s grandmother.

“(It’s) not only for Steven, but for all the people who have been murdered by San Leandro police throughout the years,” Kitchen told the council.

The park would be created out of open space near Luster Knight Memorial Bench, which is near the entrance to the par course trail at the marina.

The city did not provide estimates of the project’s cost.

San Jose Sharks defenseman Radim Simek was injured early in the second period of Saturday’s game with the Vegas Golden Knights at SAP Center. As the puck was behind the Sharks’ net, Simek was drilled by Golden Knights forward Jonathan Marchessault against the boards, and his head hit against the glass. Shortly after, with the […]

San Jose Sharks rookie defenseman Nikolai Knyzhov has already taken several steps this season to earn the respect of his teammates. They were already impressed with his backstory. Two years ago as a 19-year-old, he played in three separate leagues in his native Russia, and showed enough promise to earn an entry-level contract from the […]

How Dodgers, Padres moves have shaped the Giants’ view of their 2021 playoff path

Two teams have realistic chances of finishing with at least 100 wins in the National League West this season and neither is the San Francisco Giants. The reigning World Series champion Los Angeles Dodgers have the deepest roster in the majors and no team did more to improve its stock during the offseason than the […]