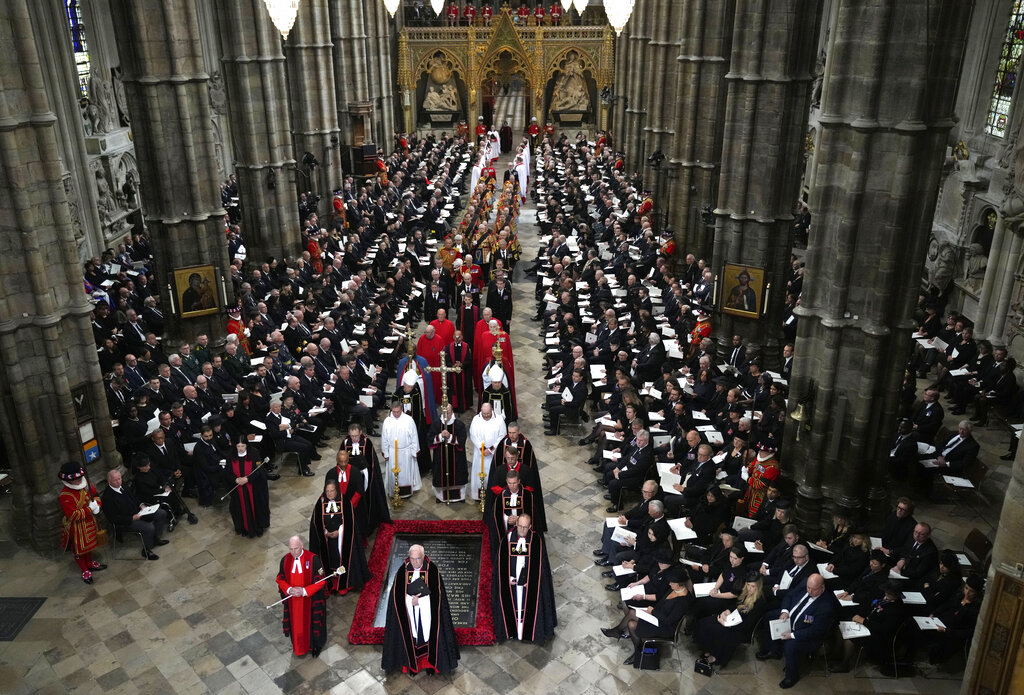 It could have been much different. There might have been a chilly September rain casting a pall over an already somber occasion. Or it might have been winter, with icy winds stabbing through coats and jackets to hearts already in pain. Instead, serendipitously, the recent weeks in Great Britain saw brilliant weather, allowing the events of Queen Elizabeth II’s funeral with a miles-long queue of mourners to play out under clear skies.

The timing of Queen Elizabeth’s death also meant that there were still plenty of flowers blooming in the royal gardens, flowers that made their way into the ceremonies. For the long trip down from Balmoral Castle in Scotland, where the Queen died, her casket was decorated with a wreath made of dahlias, sweet peas, phlox, white heather, and pine fir that had been collected from the property. It was a sweet, very personal gesture.

Once in London, a new arrangement adorned the casket. Amid all the pageantry of the events, it was these flowers that caught my eye — being possibly the most beautiful arrangement of foliage and flowers I’ve ever seen. It was touching to hear that — like the plants for the wreath from Balmoral — these living tributes were cut from gardens at various other of the royal residences, in this case Buckingham Palace, Clarence House, and Highgrove House.

It was the colors that did it for me, beautiful shades of rose, pink, salmon, purple, and burgundy, highlighted by yellow and white blooms, all amid sprays of green foliage. An online search revealed that the flowers in the wreath included scented pelargoniums, roses, autumnal hydrangea, sedum, dahlias, and scabiousa (pincushion flower). There were oak leaves, representing the strength of love. Stems of rosemary were included for remembrance.

The arrangement was simple and stunningly beautiful, but what really touched my heart was the myrtle. A few days ago, if asked, I would have told you that I didn’t know what myrtle is. Another online search revealed that common myrtle (M. communis) is native to the Mediterranean region and the Middle East. It is “cultivated in southern England and the warmer regions of North America. In Greco-Roman antiquity, common myrtle was held to be sacred to Venus and was used as an emblem of love in wreaths and other decorations.” (Britannica.com)

What made the use of myrtle in the funeral flowers incredibly poignant is that the sprays were taken from a plant that was rooted from a sprig contained in the bouquet that Queen Elizabeth carried when she married Prince Philip in 1947.

It’s hard to imagine that a funeral of the size and scope of the Queen’s will ever be seen again, but when it comes to death, I don’t think that magnitude is what’s important. I think it’s in the little things. In this case, it’s the wreaths of flowers and plants cut from the Queen’s own gardens; blooming today, yet reaching back into history and connecting with countless generations over the millennia that have mourned the passing of loved ones. …read more

While St. Francis remains unblemished at the top, and Archbishop Mitty continues to sit in the second spot, the rest of the Bay Area News Group rankings went through a bit of turnover this week. Campolindo has leaped into the Top 10. Sacred Heart Prep and St. Ignatius have, too. San Ramon Valley jumped up […]

George Harrison and Madonna | David Levenson/Getty Images George Harrison said Madonna ‘helped herself’ to his ‘Living in the Material World’ for ‘Material Girl’ In 1971, Bright Tunes Music, the publishing company of The Chiffons’ “He’s So Fine,” sued George for copyright infringement. They claimed the former Beatle copied the 1963 song for his 1970 […]