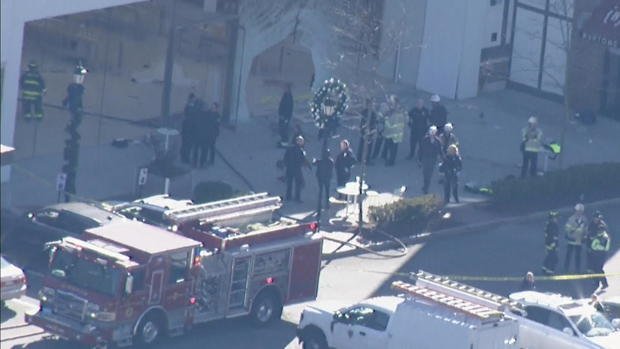 At least one person is dead and 16 people are injured after a car drove through an Apple store in Hingham, Massachusetts, Plymouth County District Attorney Tim Cruz said in a news conference Monday.

“A dark-colored SUV appears, went through at a rate of speed undetermined, through a … glass window and struck multiple people,” Cruz said.

Responding units found “multiple patients injured out in front of the store and in the store, including a few patients that were pinned against the wall by the vehicle,” Hingham Fire Chief Steve Murhpy said during a news conference Monday.

There were seven fire engines and 14 ambulances on scene to treat the injured victims, Murphy said. The chief was unable to provide updates on victims’ conditions. Authorities are not releasing the names of the injured victims at this time as they are working on notifying family members, Cruz added.

Cruz said the investigation into the car crash is “active” and ongoing.

“My understanding is he’s not been taken to the hospital as of yet,” Cruz said. “He is, right now, with police officers.”

When asked how many people were possibly inside the Apple store when the car crash occurred, Cruz noted that it is the beginning of a holiday week.

“Obviously the Apple store is a very busy place. It’s Monday of a holiday week,” Cruz said. “So therefore I don’t know exactly how many people were in there — I’m sure that we will find out.”

Apple’s Derby Street location in Hingham is currently closed, according to its website.

“We’re sorry for the inconvenience while this store is closed,” the website said. “Until we can reopen again, please consider using our online services.”

Holidays 2022: These concerts will add sparkle to the season

The Bay Area’s classical music organizations ring in the holiday season with style and enticing variety.  Here are some of the top events coming our way. A Viennese Christmas: Cal Performances launches the season with “Christmas in Vienna,” featuring the acclaimed Vienna Boys Choir. Proponents of a six-century vocal tradition, these young artists arrive bearing gifts of […]

(CNN) — Saudi Arabia produced one of the biggest upsets in World Cup history Tuesday, beating Lionel Messi’s Argentina 2-1 in an astonishing Group C match. Argentina, ranked third in the world and unbeaten for three years, was among the favorites to win the tournament. Saudi Arabia was ranked 51st. All the pre-match talk focused […]

With the Arizona Cardinals moving the ball well in the first half Monday  night, it looked as if it was finally going to be time for the 49ers’ offense to bail out their defense. Then came the second half, which means it was time for the 49ers’ defense to assume its rightful place atop the […]