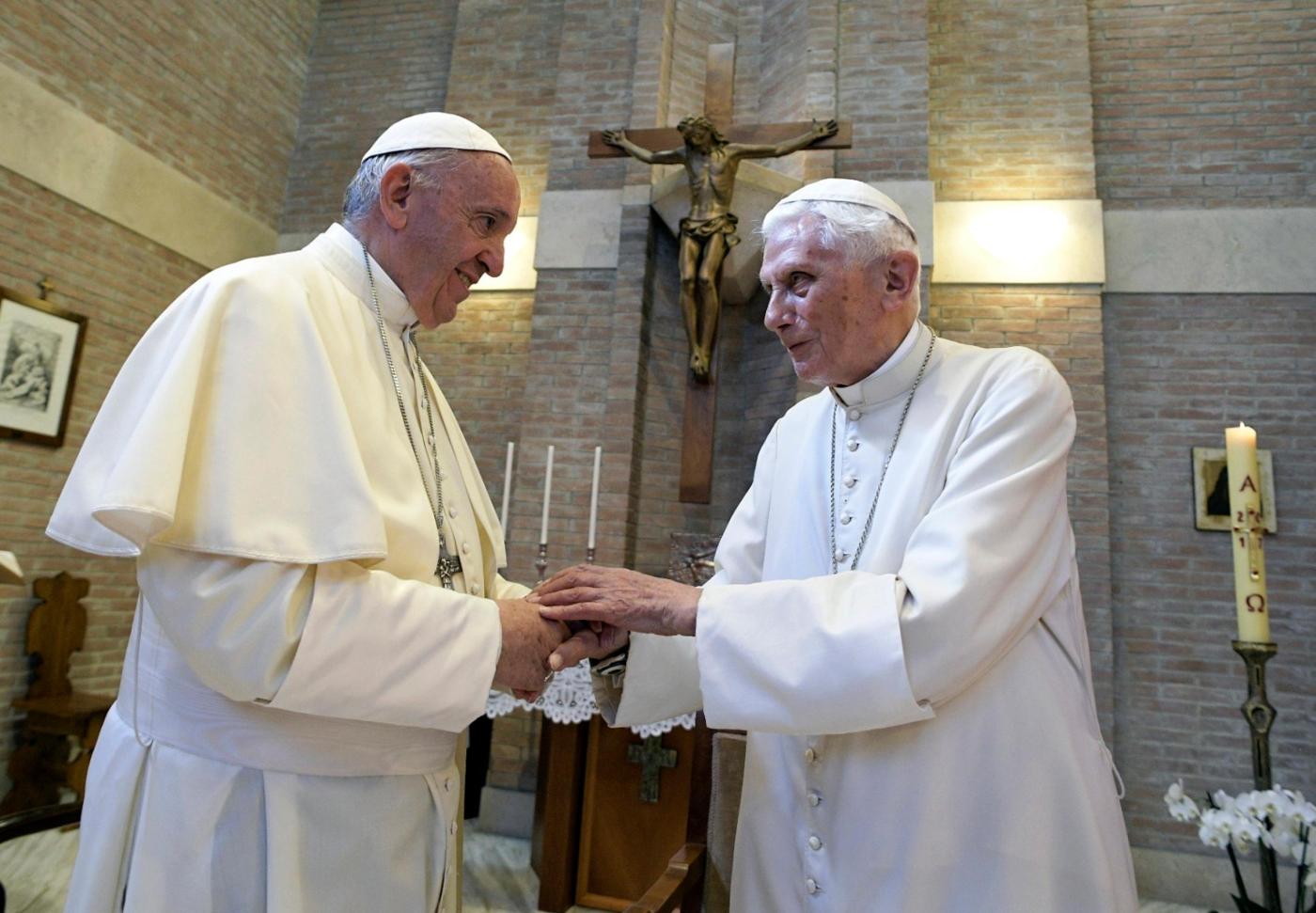 VATICAN CITY — Ever since Benedict XVI announced he would become the first pope in 600 years to resign, Catholic theologians, canon lawyers and others warned of the potential confusion in having two popes living side by side in the Vatican, one reigning, the other retired but calling himself “emeritus pope” and still wearing the white cassock of the papacy.

In a saga befitting the Oscar-nominated movie “The Two Popes,” Benedict co-wrote a book reaffirming the “necessity” of a celibate priesthood. There was nothing novel with his position, but the book is coming out at the same time Pope Francis is weighing whether to ordain married men in the Amazon because of a priest shortage there.

The implications of Benedict’s intervention were grave, since the issue of priestly celibacy is perhaps the most consequential and controversial decision on the current pope’s agenda. It raised the specter of a parallel magisterium, or official church teaching, at a time when the church is already polarized between conservatives longing for the orthodox purity of Benedict’s reign and progressives cheering Francis’ liberalizing reforms.

“It’s one thing to publish, as a private citizen, a book about Jesus as Benedict did before he resigned,” the Rev. Jean-Francois Chiron, a theologian at the University of Lyon, wrote in the French Catholic daily La Croix. “It’s another thing to take sides in important, current questions facing the universal church.”

On Tuesday, Benedict distanced himself from the publication and asked to be removed as the co-author of the book, “From the Depths of Our Hearts,” which is coming out in French on Wednesday and in English next month.

Benedict’s longtime secretary, Archbishop Georg Gaenswein, said that there had been a “misunderstanding” with his co-author, Cardinal Robert Sarah of Guinea, and that while Benedict contributed an essay to the book, he never intended to be listed as the co-author.

That should have closed the matter, albeit imperfectly. However, the book’s English-language publisher, Ignatius Press, refused to back down, saying the book would carry Benedict’s name as co-author.

In a statement, the San Francisco-based Ignatius said it had worked from the text provided by French publisher Fayard, which listed two authors contributing a chapter apiece and a jointly written introduction and conclusion.

“Ignatius Press considers this a coauthored publication,” it said.

Ignatius, Fayard and all other publishers clearly have …read more

Philippine volcano shoots lava a half-mile into the sky

By Joeal Calupitan and Jim Gomez | Associated Press TAGAYTAY, Philippines — A volcano near the Philippine capital spewed lava into the sky and trembled constantly Tuesday, possibly portending a bigger and more dangerous eruption, as tens of thousands of people fled villages darkened and blanketed by heavy ash. Government work was suspended and schools […]

By Devan Cole | CNN The US Navy will announce Monday that it will name a new aircraft carrier after Doris “Dorie” Miller, a decorated African American World War II veteran who defended Pearl Harbor during the 1941 attack on the Hawaiian naval base. Acting Secretary of the Navy Thomas Modly will make the announcement […]

Letter: If Obama did what Trump did, they’d be praising him