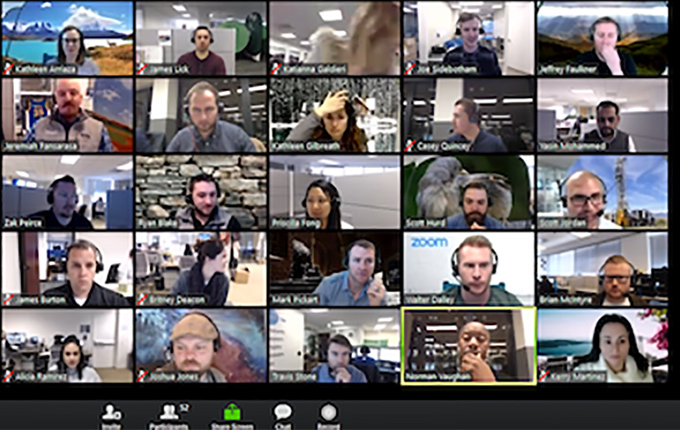 A New York man was fatally stabbed Thursday while on a Zoom video chat with about 20 other people.

Some of the participants called 911, and the suspected killer — the man’s son — was arrested about an hour later.

Dwight Powers, 71, was on the video call around noon in his Amityville apartment when he was attacked by his son, Thomas Scully-Powers, 32, said Suffolk County police.

Scully-Powers then jumped out of the second-story apartment’s window and fled the scene. He was arrested about a mile away and taken to a hospital for treatment of minor injuries.

He will be charged with murder in the second degree, police said in a statement.

They did not describe the nature of the Zoom conference, citing privacy concerns.

A police homicide detective told Long Island Newsday on Thursday that it had not been determined if anyone on the Zoom chat had seen the actual attack. “They just noticed him fall off the screen and then they heard heavy breathing,” he said.

WELLINGTON, New Zealand — New Zealand Prime Minister Jacinda Ardern barely skipped a beat when an earthquake struck during a live television interview Monday morning. She interrupted Newshub host Ryan Bridge to tell him what was happening at the parliament complex in the capital, Wellington. “We’re just having a bit of an earthquake here Ryan, […]

LOS ANGELES — A precipitous drop in applications for green cards, citizenship and other programs has threatened the solvency of the federal agency that administers the country’s lawful immigration system, prompting it to seek a $1.2 billion cash infusion from Congress as well as fee hikes to stay afloat. The U.S. Citizenship and Immigration Services, […]

By Johan Ahlander and Niklas Pollard | Reuters STOCKHOLM – A Swedish study found that just 7.3 percent of Stockholmers developed COVID-19 antibodies by late April, which could fuel concern that a decision not to lock down Sweden against the pandemic may bring little herd immunity in the near future. The strategy was championed by […]