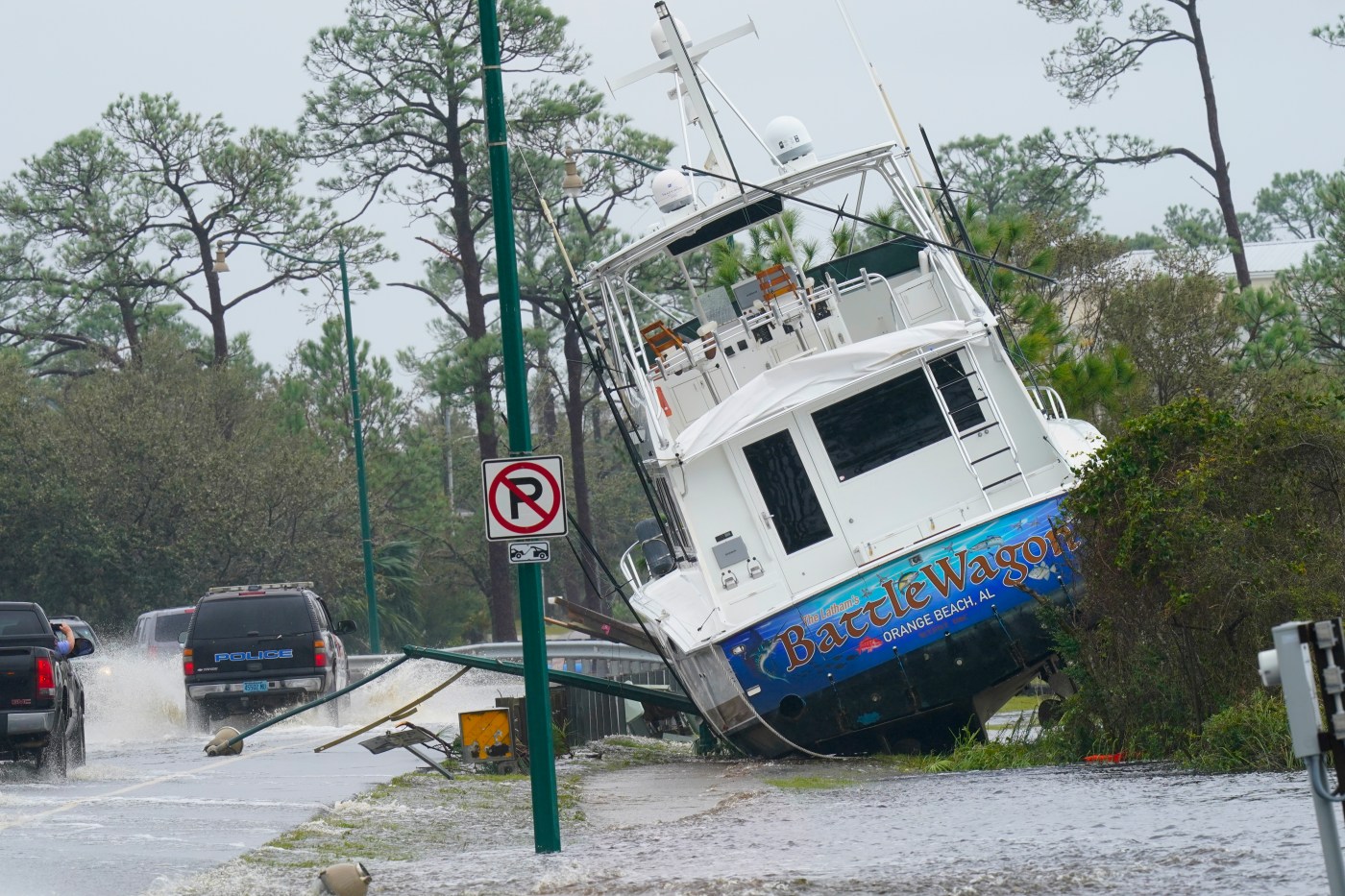 PENSACOLA, Fla. — Hurricane Sally lumbered ashore near the Florida-Alabama line Wednesday with 105 mph (165 kph) winds and rain measured in feet, not inches, swamping homes and forcing the rescue of hundreds of people as it pushed inland for what could be a slow and disastrous drenching across the Deep South.

Moving at just 3 mph (5 kph), or about as fast as a person can walk, the storm made landfall at 4:45 a.m. close to Gulf Shores, Alabama, about 30 miles (50 kilometers) from Pensacola, Florida. It accelerated to a light jog as it battered the Pensacola and Mobile, Alabama, metropolitan areas encompassing nearly 1 million people.

It cast boats onto land or sank them at the dock, flattened palm trees, peeled away roofs, blew down signs and knocked out power to more than a 540,000 homes and businesses. A replica of Christopher Columbus’ ship the Nina that had been docked at the Pensacola waterfront was missing, police said.

Sally tore loose a barge-mounted construction crane, which then smashed into the new Three Mile Bridge over Pensacola Bay, causing a section of the year-old span to collapse, authorities said. The storm also ripped away a large section of a fishing pier at Alabama’s Gulf State Park on the very day a ribbon-cutting had been scheduled following a $2.4 million renovation.

By the afternoon, authorities in Escambia County, which includes Pensacola, said at least 377 people had been rescued from flooded areas. More than 40 people trapped by high water were brought to safety within a single hour, including a family of four found in a tree, Sheriff David Morgan said.

Authorities in Pensacola said 200 National Guard members would arrive Thursday to help. Curfews were announced in Escambia County and in some coastal Alabama towns.

Sally turned some Pensacola streets into white-capped rivers early Wednesday. Sodden debris and flooded cars were left behind as the water receded.

By early afternoon, Sally had weakened into a tropical storm, with winds down to 70 mph (110 kph). Showers still fell in parts of the stricken area Wednesday evening, and the storm was expected to generate heavy rain farther inland as it moved over Alabama and into Georgia.

At least eight waterways in south Alabama and the Florida Panhandle were expected to hit their major flood levels by Thursday. Some of the crests could break records, submerge bridges and flood some homes, the National Weather Service warned.

“There are entire communities that we’re going to have to evacuate,” the sheriff said. “It’s going to be a tremendous operation over the next several days.”

“I think the professionals got this one …read more

The Latest on wildfires in the U.S. West (all times local): 6:45 p.m. CHICO, Calif. — Search and rescue workers found three more bodies in the rubble of a Northern California wildfire, raising the death toll in that fire to 12 and total deaths in the state’s recent blazes to 22. Butte County Sheriff Kory […]

SALEM, Ore. — Diminishing winds and rising humidity helped firefighters battling deadly blazes in Oregon and California, but with dozens of people still missing, authorities in both states feared that the receding flames could reveal many more dead across the blackened landscape. Oregon’s emergency management director said officials were preparing for a possible “mass fatality […]

PORTLAND, Ore. — As unrest continues in Portland amid 100 straight days of protests, authorities released additional court documents late Friday detailing the moments before the slaying of a right-wing protester last weekend. The documents included shots of security footage that showed the suspect, Michael Forest Reinoehl, ducked into a parking garage and reached toward […]