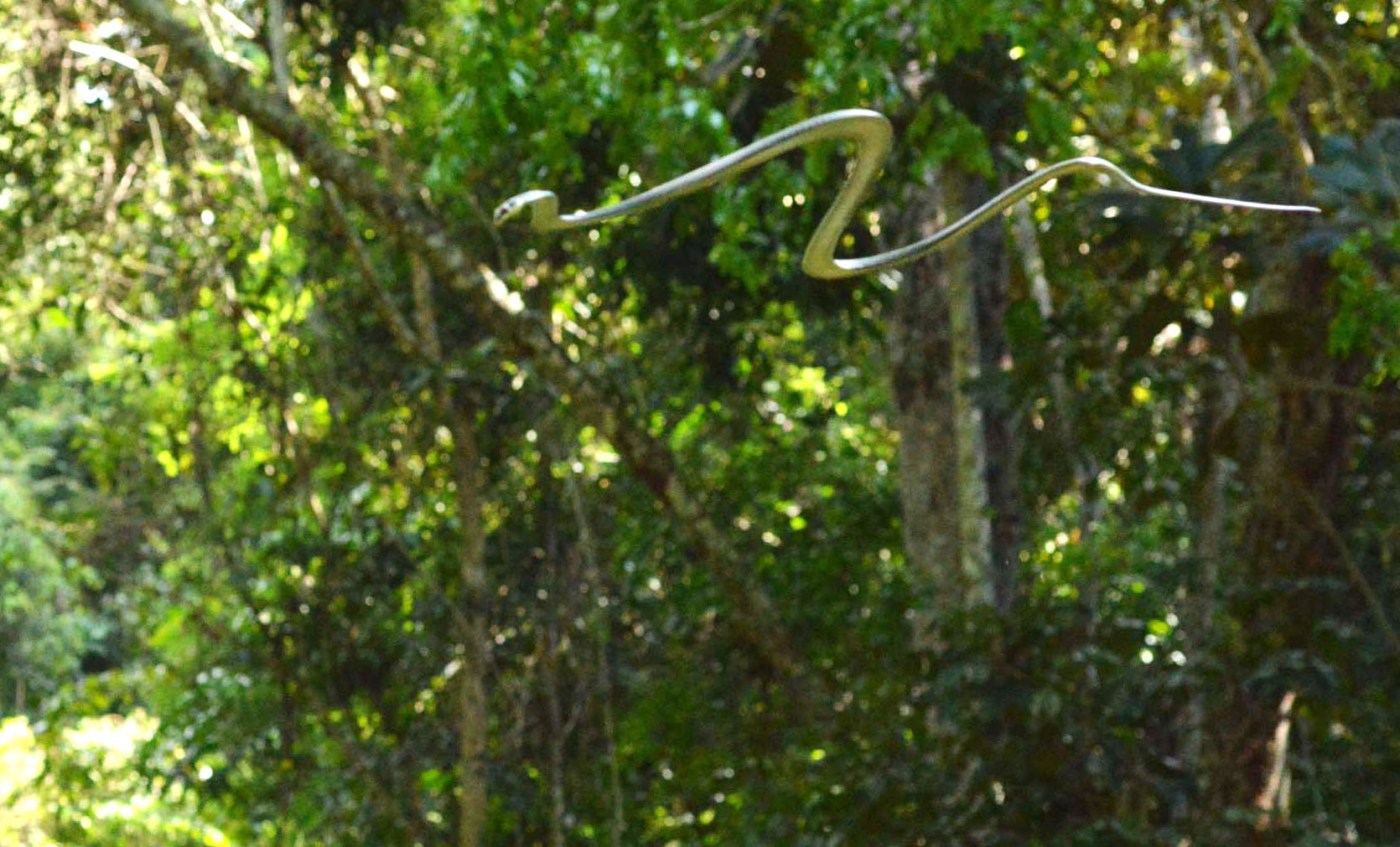 Phobia warning: If you’re an ophidiophobic who accidentally landed here, you’ll want to click away now.

In fact, you don’t even have to be generally afraid of snakes to be a little freaked out by the concept of one launching itself through the air, and that’s what this article is about.

Specifically: Chrysopelea paradisi, the paradise tree snake, which propels itself from trees.

Little was known about how such snakes “fly” before a team of scientists from Virginia Tech published a new research paper Monday.

Lead author Isaac Yeaton told CNN the team set out to understand how the snakes glide through the air.

All snakes undulate when they move across the ground, but flying snakes also do it in the air, and researchers had been curious as to why they did it.

“You don’t strictly need to undulate to fall, so that leads to the question, ‘Well, then, why are they undulating?’” said Yeaton.

One hypothesis was that it was a base motor pattern for snakes built in over millions of years, but Yeaton said they now understand the undulation stabilizes the glide and stops the snake from tumbling, as well as allowing it to cover more horizontal distance.

The next stage for researchers is to observe snakes gliding outdoors, Yeaton said, as well as investigating how they generate lift and how they turn in the air.

He told CNN snakes are “question-generating organisms” and there are plenty more mysteries to be solved.

He acknowledged that he understands why some people would rather not think about airborne snakes. “We have a visceral response to snakes,” he said. “Then the idea that this animal can then fly is very unsettling to people.”

The full research was published in the journal Nature Physics.

“Lift Every Voice and Sing” hymn ignites hope across nation

LOS ANGELES — The Black national anthem was born more than a century ago, but the popular hymn within the African American community called “Lift Every Voice and Sing” has resurrected a beacon of hope during nationwide protests. In recent weeks, countless rallies were held from D.C. to Seattle with arm-locked protesters of different races […]

By Matthew Barakat | Associated Press ALEXANDRIA, Va. — A Lebanese American businessman who was a key witness in special counsel Robert Mueller’s report and who helped broker the release of American hostages was sentenced Friday to 10 years in prison sentence on child sex charges. George Nader pleaded guilty in January to bringing a […]

By Emily Wagster Pettus | The Associated Press JACKSON, Miss. — Mississippi lawmakers voted Sunday to surrender the Confederate battle emblem from the state flag more than a century after white supremacist legislators adopted the design a generation after the South lost the Civil War. Spectators in the Capitol cheered and applauded after the votes […]