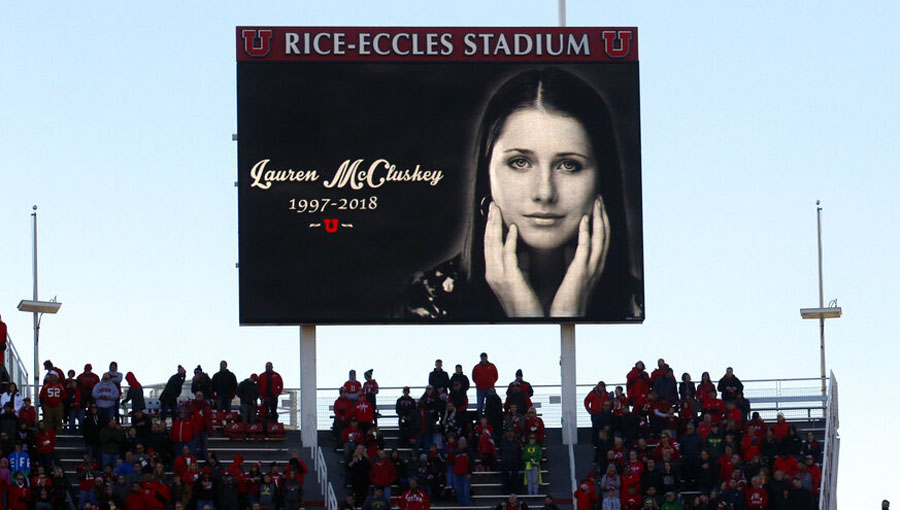 SALT LAKE CITY (AP) — A University of Utah police officer has been accused of keeping on his phone sexually explicit images of a student who had complained of harassment — and who was later fatally shot by the alleged harasser.

Officer Miguel Deras on Tuesday denied the allegations unearthed by the Salt Lake Tribune, which quoted unnamed officers as saying he had “bragged” about having the images of Lauren McCluskey. State law enforcement officials have said they will investigate the claim.

McCluskey, a 21-year-old undergraduate and track athlete, had contacted university police more than 20 times to report harassment by a man she had dated. She said he had used the compromising photos in an attempt to extort money from her, and she gave the images to the police as evidence in the investigation.

On Oct. 22, 2018, McCluskey was fatally shot by that man, Melvin Shawn Rowland, 37, after he abducted her outside of her dormitory on the University of Utah campus. Rowland later killed himself.

The case has roiled the universtiy, with accusations that campus authorities did not take McCluskey’s concerns seriously.

Rowland was a registered sex offender on parole who had been lying to McCluskey about his name, age and background.

The university has acknowledged mistakes and made campus-safety changes, but maintained the 21-year-old’s death could not have been prevented.

Of the newly publicized accusations against Deras, his attorney, Jeremy Jones, said: “He never shared the photos in question, and certainly not in the manner described.” He said Deras received the photos through his department email as part of McCluskey’s extortion report, and, during a routine briefing, he accessed them on his personal phone because officers did not have department phones at the time.

That account is similar to the findings of an internal probe by the campus police department, but its new chief, Rodney Chatman, said he’s now concerned about thoroughness of that investigation. The officers who conducted it have been placed on administrative leave as the Utah Department of Public Safety completes a new review.

“It is inexcusable for a police officer to inappropriately share or discuss photos or information provided by a victim seeking justice,” said Chatman, who was hired after other missteps in the McCluskey case sparked a backlash.

He pledged to release the results of the new probe publicly, in an effort to help the department “regain credibility” since McCluskey’s death.

WHO warns that 1st wave of coronavirus pandemic not over, dampens hopes

BANGKOK — As Brazil and India struggle with surging coronavirus cases, a top health expert is warning that the world is still in the very middle of the outbreak, dampening hopes for a speedy global economic rebound and renewed international travel. “Right now, we’re not in the second wave. We’re right in the middle of […]

MIAMI (AP) — Tropical Storm Arthur inched closer to the U.S. Atlantic seaboard on Sunday, although its impact was expected to be limited to some minor flooding and rough seas along the North Carolina coast. Arthur formed Saturday off the coast of Florida, making this the sixth straight year for a named storm to develop […]