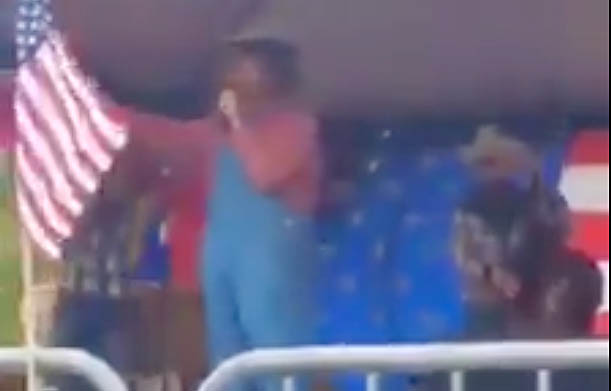 A conservative rally over the weekend in Olympia, Washington, went off the rails, apparently hijacked by pranksters claiming to be from a California group opposing coronavirus shutdowns.

Many in attendance claimed that a “hillbilly singer” who led a racist singalong at the event was comedian Sacha Baron Cohen in disguise. He has not claimed responsibility, but the entertainment publication Variety said it could confirm the identification.

Saturday’s March for Our Rights 3 had been organized by several people associated with the far-right militia movement, including state legislative candidate Matt Marshall. He told NPR that a week before the rally he had been contacted by Back to Work USA, which claimed to be an Orange County-based group calling for an end to “unconstitutional directives in the fight against COVID-19.”

Marshall said Back to Work USA offered to pay for the Olympia rally and provide a headliner: country singer Larry Gatlin. Marshall estimated the group paid $50,000 for facilities and services.

About 500 people attended the event, in a downtown Olympia park.

Larry Gatlin did indeed show up, but before he could take the stage, it was announced that a warm-up set would be played by the “Alright Boys,” led by a singer in overalls and an apparently fake beard.

Marshall said the singer performed for about 10 minutes, and that some people joined his prompts to sing along but that others were offended. A video posted to YouTube shows the man singing about “the Wuhan flu.”

When organizers tried to get the man off stage, the “security guards” hired by Back to Work USA hustled the performer to a private ambulance and he left the scene, the Olympian newspaper reported.

According to the Olympian, the baffled Gatlin asked Marshall, “What was that? I thought this was a Republican Second Amendment event.”

“Somebody just spent a whole lot of money trying to set us up,” Marshall told NPR.

On his Showtime political satire series “Who is America?” Baron Cohen routinely tricks politicians into doing and saying embarrassing things on camera.

Back to Work USA issued one press release this month, but the website it lists does not exist.

ST. LOUIS (AP) — A couple pointed guns at protesters in St. Louis as a group marched toward the mayor’s home to demand her resignation after she publicized the names and addresses of some residents who supported defunding the police department. Videos on Twitter showed the armed couple standing outside their large home Sunday evening […]

“Lift Every Voice and Sing” hymn ignites hope across nation

LOS ANGELES — The Black national anthem was born more than a century ago, but the popular hymn within the African American community called “Lift Every Voice and Sing” has resurrected a beacon of hope during nationwide protests. In recent weeks, countless rallies were held from D.C. to Seattle with arm-locked protesters of different races […]