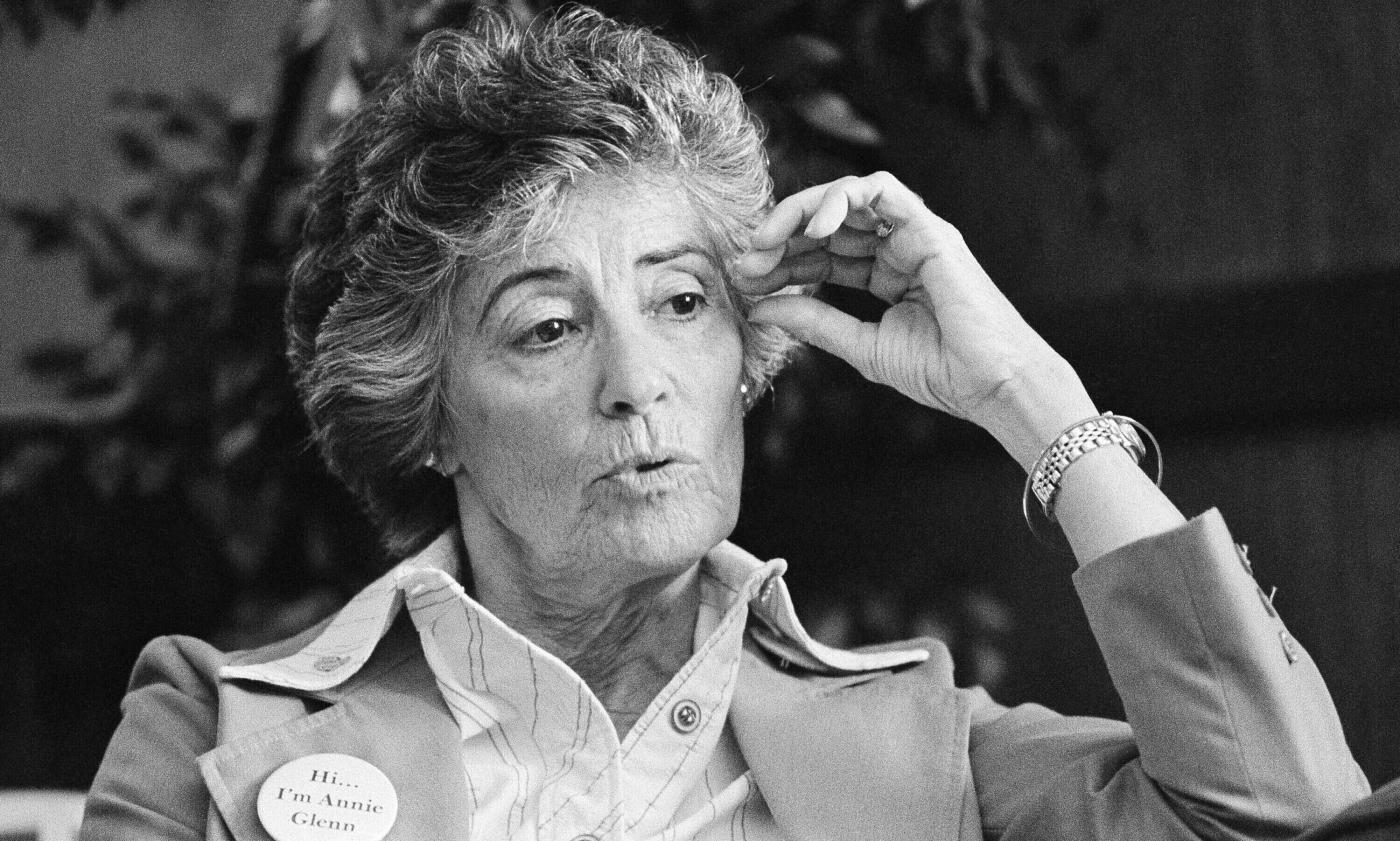 COLUMBUS, Ohio (AP) — Annie Glenn, wife of the late astronaut and U.S. Sen. John Glenn who overcame a childhood stutter to become an advocate for others with speech disorders, died Tuesday of complications from COVID-19. She was 100.

Glenn died at a nursing home near St. Paul, Minnesota, where she’d moved in recent years to be near her daughter, said Hank Wilson, a spokesman for the Glenn College of Public Affairs at The Ohio State University.

John Glenn died in 2016 following an extraordinary career that included breaking the transcontinental speed record, becoming the first American to orbit Earth and serving as a Democratic U.S. senator from Ohio. At the time of his death, he and Annie had been married 73 years.

The relationship was “the stuff of fairy tales and one of the great love stories of all time,” Dale Butland, the senator’s former speechwriter and chief of staff, said in a statement Tuesday.

“During WW II, the Korean war and two flights into outer space, Annie patiently waited for her John to come home,” Butland said. “Since December of 2016, John’s been patiently waiting for his Annie. Today, they’re both where they always wanted to be: together — for all eternity.”

Annie Glenn was thrust into the spotlight in 1962, when her husband made his famous space flight. She shied away from the media attention because of a severe stutter.

Later, she underwent an intensive program at the Communications Research Institute at Hollins College, now Hollins University, in Roanoke, Virginia, that gave her the skills to control her stutter and to speak in public.

By the time 77-year-old John Glenn returned to space in 1998 aboard space shuttle Discovery, Annie showed she had become comfortable in her public role when she acknowledged that she had reservations about the retired senator’s second flight.

“John had announced one year before that he was going to retire as a senator, so I was looking forward to having him as my own because I had given him to our government for 55 years,” she told a NASA interviewer.

“Annie will be remembered for her work to lift others up, including those who shared her struggles with communicative disorders,” he said in a statement. “Her passion for helping others, along with a kind spirit and sharp wit, endeared Annie to anyone who met her.”

“She represented all that is good about our country,” he said in a statement.

In 1998, Defense Secretary William Cohen honored Annie Glenn with the Department of Defense Medal for Outstanding Public Service. He called her “a hero in her …read more

Map: 3-state search for college student after two killings and a kidnapping

By DOUG GLASS, The Associated Press MINNEAPOLIS — Violent protests over the death of a black man in police custody rocked a Minneapolis neighborhood for a second straight night as angry crowds looted stores, set fires and left a path of damage that stretched for miles. The mayor asked the governor to activate the National […]