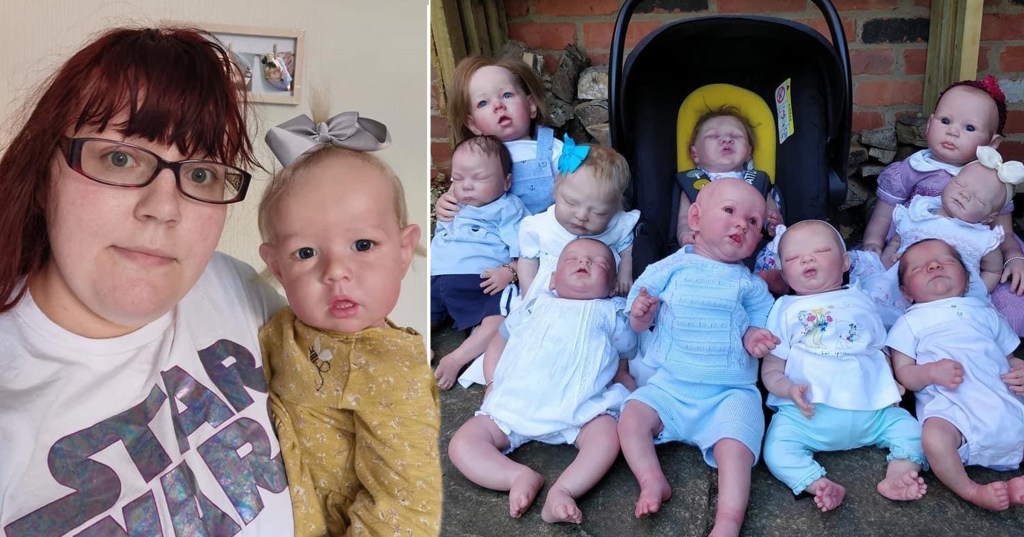 ‘I am fully aware that they are not real, but there is an emotional bond there’ (Picture: PA Real Life)

Natasha Harridge is expecting a baby with her partner, Jordan Rodwell, but she’s decorating two nurseries instead of one.

One room will be for her child, who’s due in February 2023, while the other will be for the collection of ‘reborn’ dolls she’s been building since she was a teen.

The dolls were a great source of comfort for her after she lost six pregnancies in four years, and she refers to herself as their mother.

Natasha, 23, said: ‘Even when I have my own baby, the reborns will always be a part of my life.

‘But when I lost my babies, it meant so much to me to be able to sit and cuddle them.

‘I am fully aware that they are not real, but there is an emotional bond there and I do call myself their mum and love them.’

Natasha’s decorating the second nursery with Jordan’s, 26, approval, with the one for their child painted yellow and the one for the dolls painted sage green.

She is already looking forward to introducing her real baby to the collection, with each doll costing around £500.

She said: ‘I won’t have as much time to spend with the reborns because, obviously, my real baby will be my priority. But I would love to be able to introduce them to each other.

‘Once the baby gets a bit older, if they show an interest in the dolls, I would love to get them their own reborn doll called a “playborn.” They are made specifically for children and cost around £100 to £200.

‘I like to imagine, once we have expanded our family even more, watching our son or daughter at Christmas opening their first reborn doll and seeing their expression.’

Natasha, a carer, first met milkman Jordan, on a dating app in 2021, and a month into their relationship, she introduced him to reborn doll Scarlet.

She was ecstatic to find he ‘fell in love with her’.

She said: ‘He calls Scarlet his “Daddy’s girl” now and loves her sitting on the sofa with him and interacting with her.

Jordan is also looking forward to the birth of his child, and to introducing the baby to the reborns.

He said: ‘Before I actually saw the reborns, I wasn’t that interested in them because I originally thought they were weird.

‘But one day Tasha had Scarlet downstairs when I came over, after we had just starting dating, and about a week or so later, I thought she was quite cute. Ever since then, I have shown more interest in them.

‘I do prefer the toddlers. The babies are …read more

On Sunday, head coach Robert Saleh said he was hoping to get clearance on if quarterback Zach Wilson would return for Week 4. A day later, it appears he and the rest of the Jets’ players are still waiting. During his Zoom press conference Monday, Saleh said they need to hear from Wilson’s doctors in […]