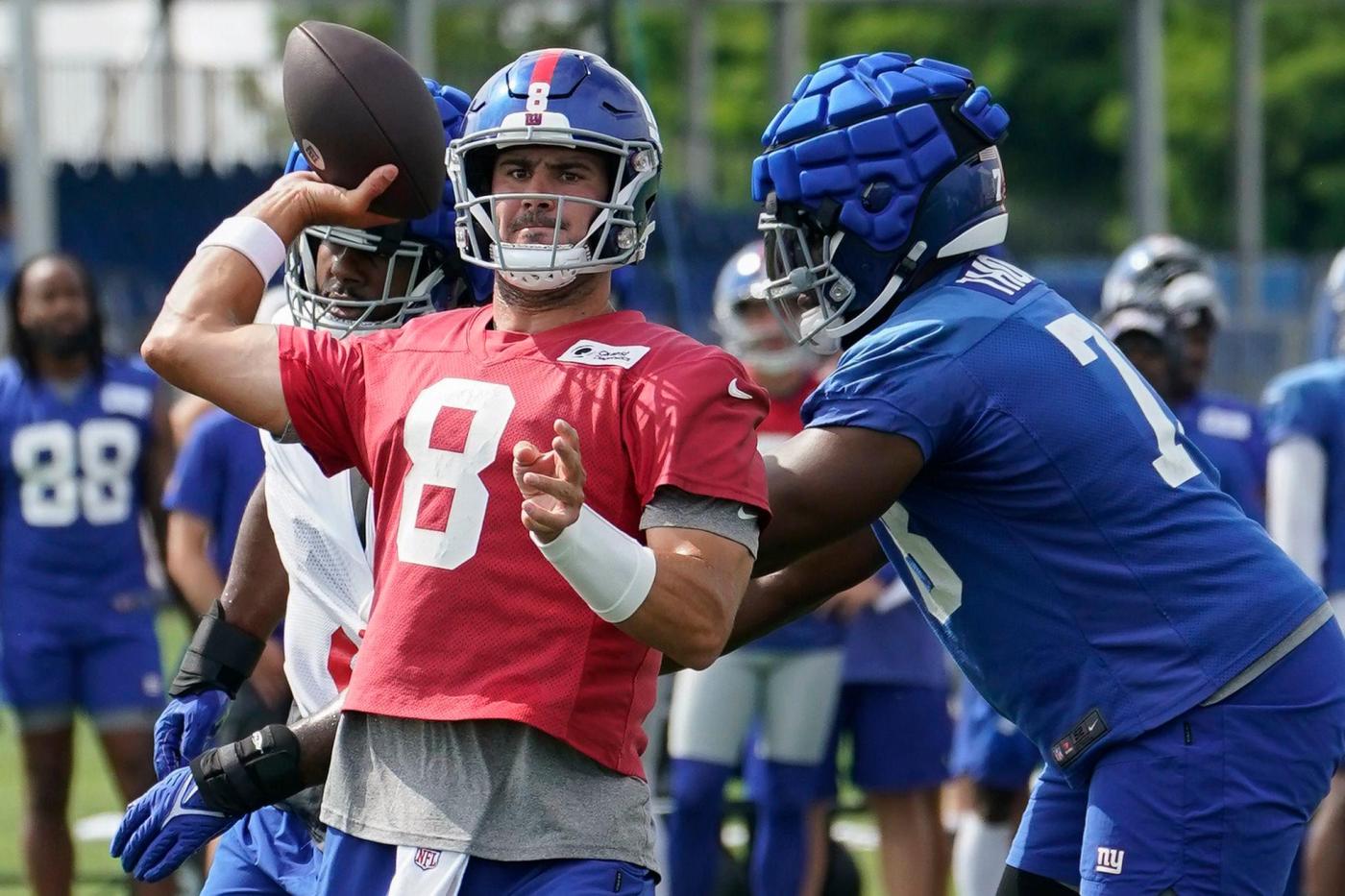 The fourth-year QB unofficially completed 13 of 17 passes with two touchdowns, two interceptions and three sacks. That included 16 plays of 11-on-11 and four plays of 9-on-9.

As Eli Manning watched practice with Giants brass, Jones threw TDs to camp standouts Richie James and David Sills in the two-minute offense. And he connected on deep shots down the right sideline to Kadarius Toney and Saquon Barkley.

“He’s working hard,” coach Brian Daboll said of Jones. “Look, developing an offense or a defense or a team, let’s just say a team when you’re first starting out as a head coach, a new staff, new players, it takes a lot of work. And we’re still very much still a work in progress.”

Top corner Adoree Jackson intercepted Jones twice: once by jumping a Toney route in 9-on-9, once in the red zone on an overthrown pass to Wan’Dale Robinson.

The defense also broke through for sacks by Jihad Ward, Julian Love and a split between Kayvon Thibodeaux and Darnay Holmes.

But the ball rarely hit the ground, and that was an important step for Jones given the offense’s slow start to training camp.

Sills, meanwhile, caught a whopping five passes from Jones, including a touchdown to close practice on the left side of the end zone.

Wide receiver Kenny Golladay was given a rest day, affording more first-team snaps for players like Sills, James and C.J. Board.

Daboll also took his team out of pads after just one padded practice Monday, though Tuesday’s hot practice featured a significant workload of snaps.

Golladay would not disclose whether the injury that sidelined him this spring had been from the 2021 season or his early offseason training.

“We’re not gonna talk about all that,” Golladay said.

Ben Bredeson also did well in his first opportunity at first-string center while starter Jon Feliciano remains sidelined by an undisclosed ailment.

Jamil Douglas had struggled enough in previous days to prompt Daboll to play left guard Shane Lemieux in the middle at times. Bredeson was steady Tuesday.

Daboll blew plays dead for sacks when the second-team offense was on the field but didn’t appear to be doing it for the first-team offense.

Feliciano and tight end Ricky Seals-Jones sat out a fourth straight practice each. Feliciano was on the field in uniform but worked mostly with the trainers. Daboll said Feliciano is “real close” … Veteran Andrew Adams is the third safety on the depth chart with rookie Dane Belton (broken collarbone) and Jarren Williams (waived/injured, hamstring) going down. Adams sees work with the first-string defense in dime packages … Collin Johnson made two big catches downfield on Tyrod Taylor passes, including one touchdown. And Darius Slayton made an excellent, all-hands TD catch over Khalil Dorsey on a Taylor deep pass on a busted play … Wideout Robert Foster got hurt and carted off after making a deep catch and landing hard out of bounds in the end zone on a Taylor pass. Foster was …read more

Justin Fields has to ‘learn from the mistakes’ as the Chicago Bears try to get their passing game in gear vs. the New York Giants

Maybe it will help Chicago Bears quarterback Justin Fields that he spent a week preparing for a Wink Martindale defense a year ago. The outing was a short one for Fields. He was knocked out of a 16-13 loss to the Baltimore Ravens in Week 11 at Soldier Field with bruised ribs suffered at the […]

Denver Post sports writer Patrick Saunders with the latest installment of his Rockies Mailbag. Pose a Rockies — or MLB — related question for the Rockies Mailbag. Hi Patrick! I want to say thank you for all your answers to my questions as well as everybody else. It must be quite a task to get answers […]

Mollie has revealed a brand new hairstyle (Picture: ITV) Coronation Street’s Mollie Gallagher – who plays Nina Lucas in the show – has treated herself to a makeover and showcased a new hairstyle on her Instagram. There’s a lot more blonde on show now, with her darker hair fastened up to reveal more blonde. And […]