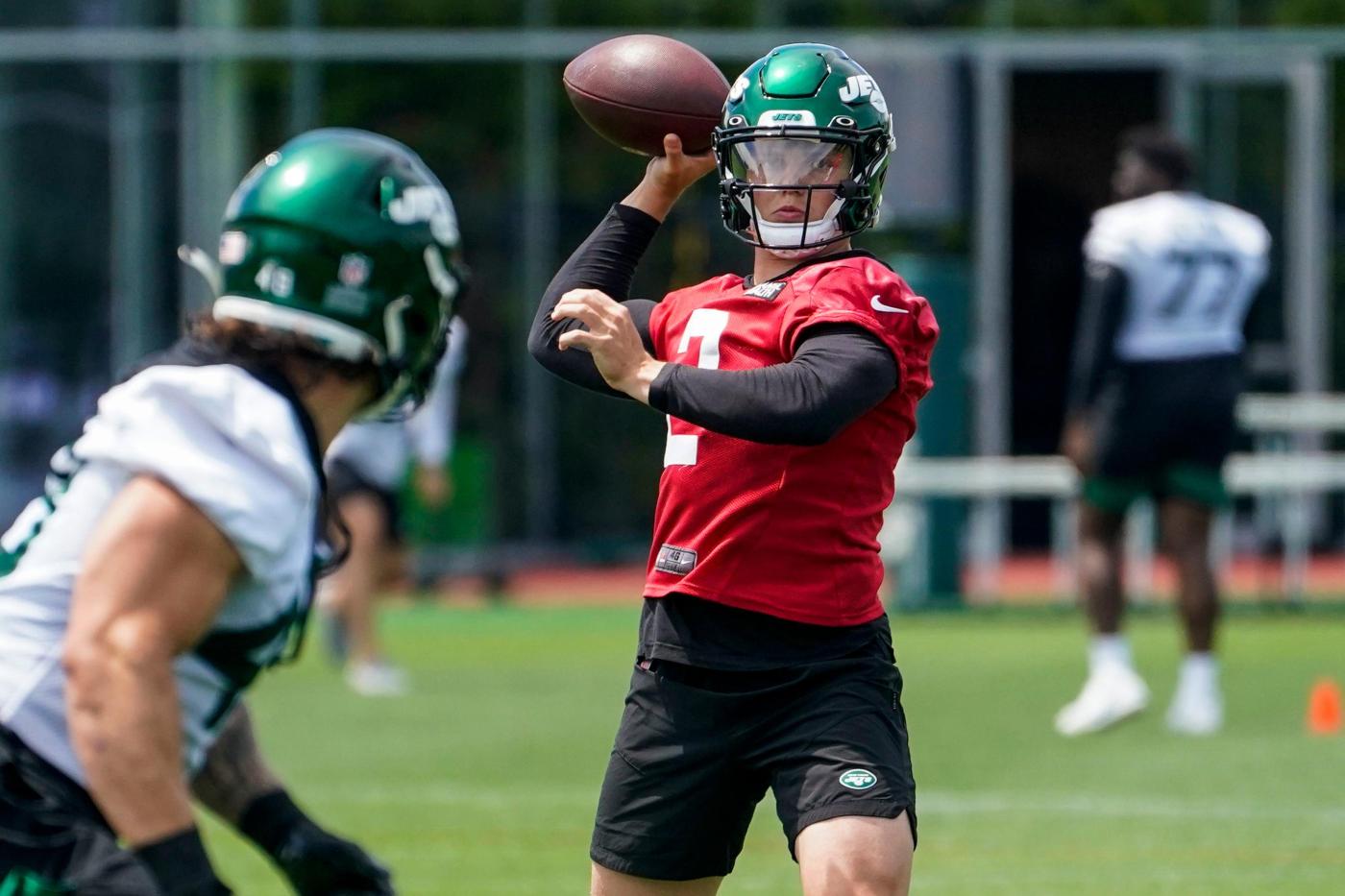 Zach Wilson sliced the defense into pieces during the first day of the Jets’ mandatory minicamp.

When all was said and done, it was his best offseason practice.

Wilson’s efficiency throughout Tuesday’s practice was outstanding as he operated within the structure of the play calls. The former No. 2 overall pick went 10-for-13 in team drills and 13-for-16 during 7-on-7s.

Numbers in practice don’t equate to much. It’s in shorts with little pass rush. But it’s how he generated those stats.

Wilson’s eyes were constantly in the right place throughout the afternoon as he fired a plethora of accurate passes within the timing of the play. The second-year quarterback did a phenomenal job of surveying the field throughout the day and his anticipation was sharp.

There weren’t a bunch of explosive chunk plays that usually cause fans to drool on the smart device as they salivate over the highlights. But the quick decision-making post-snap by locating where his eyes should be equaled a decisive Wilson on this day.

It was the death by a thousand paper cuts approach.

Receivers quickly sprung open and Wilson found them whether it was in the intermediate game, short areas or after he found his checkdowns in the flat after he went through the progressions.

In his previous OTA practice, Wilson struggled with reading the defense, which led to a multiple interception practice.

But during Tuesday’s practice, those issues vanished, at least for one day on the green grass of the practice facility on One Jets Drive.

Wilson’s day slightly nosedived towards the end of the day during the two-minute drill. The offense started well with two darts by Wilson for the first two plays. But the next three passes fell incomplete.

But overall, six incompletions. Good day for the young QB.

“His daily focus is what he’s trying to get done. Not trying to have a laundry list of things each and every day. It’s let’s focus on this one thing, two things, whatever it might be, and stay dialed into that,” LaFleur said. “I think [QB coach] Rob Calabrese has just done awesome in setting a standard, the goals that we wanted to get accomplished each and every day each week. And Zack has bought into that.”

Wilson accomplished what the goal was for Tuesday’s practice. Let’s see if he can carry the momentum into the final day of minicamp.

No. 10 overall pick Garrett Wilson had his best practice of the offseason in the sessions available to the media. Wilson ran nice routes to create decent separation and made a fantastic catch in traffic that showed off his verticality. He also had some other catches that caught people’s eyes.
Corey Davis was Zach Wilson’s security blanket throughout the day as he caught four passes for sizable gains.
Denzel Mims caught a pass from Joe Flacco over the middle and turned on his 4.3 speed for a long gain.
D.J. Montgomery caught a deep ball from Zach Wilson on a broken play during 7-on-7. …read more

The smoke is building around Jaden Ivey to the Knicks

The Knicks and Jaden Ivey are circling each other ahead of the draft. As the top guard in his class, Ivey will assuredly be off the board if the Knicks stay with their 11th pick on Thursday. But as rumors circulate about Leon Rose’s desire to trade up, Ivey casually listed the Knicks as an option […]

Jayson Tatum says no time for Celtics to worry about fatigue

BOSTON — If they are to rebound from their first two-game losing streak of the postseason and fight off elimination, the Celtics will have to summon a level of energy that wasn’t apparent at the end of their Game 5 loss on Monday night. Ime Udoka has admitted that after four rounds and 24 games […]

After skipping the Ravens’ organized team activities, quarterback Lamar Jackson was back at the team’s mandatory minicamp Tuesday. Defensive tackle Michael Pierce, however, was not. Pierce, who was not present for the three voluntary practices open to reporters in Owings Mills, signed a three-year, $16.5 million contract with the Ravens in March. The reason for […]