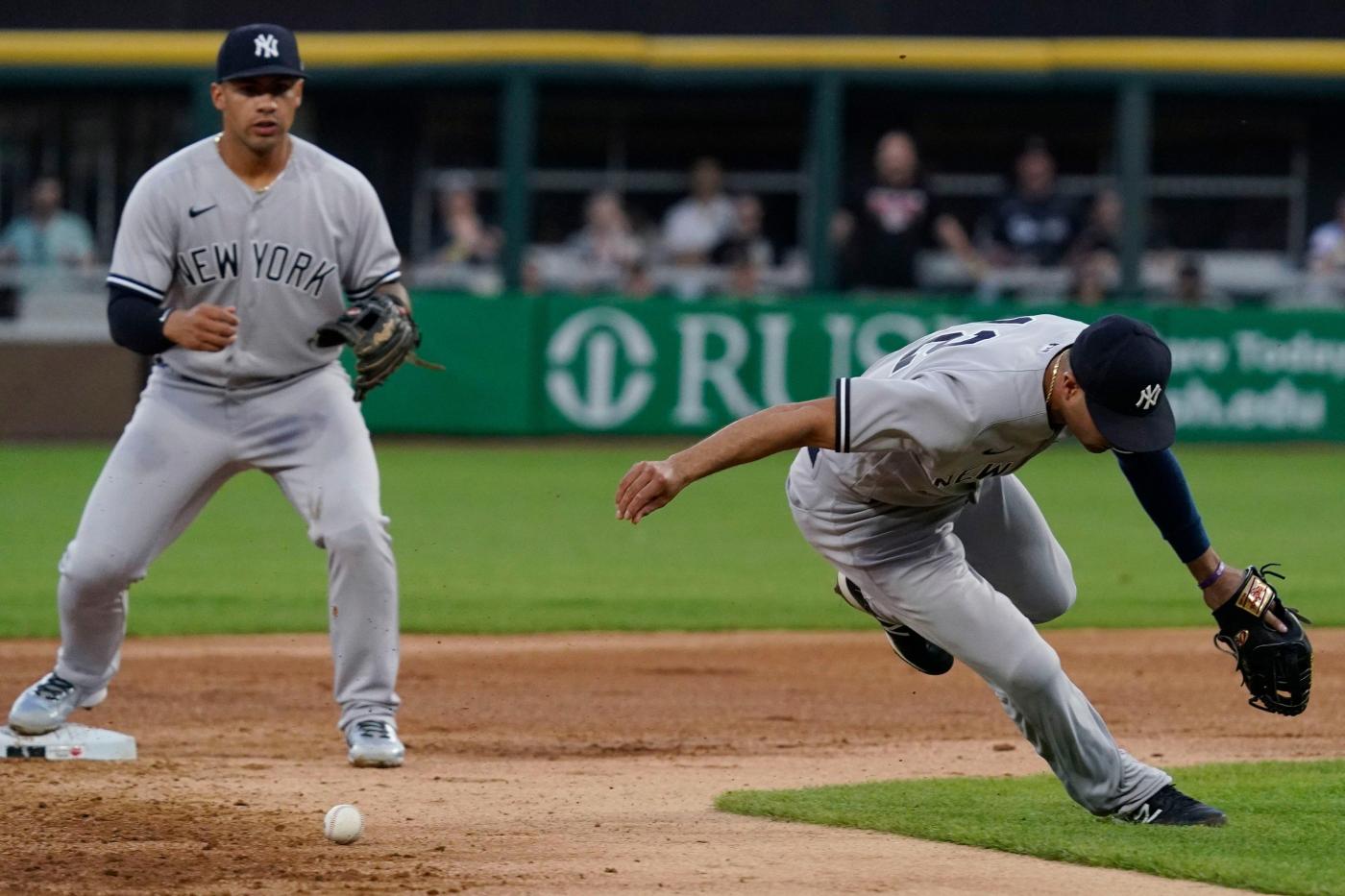 CHICAGO —  At one point, Gleyber Torres went over to Isiah Kiner-Falefa and just put his arm around his shoulder. Torres has been there and understands all too well the pressure of being the Yankees shortstop. Kiner-Falefa has had a bad spell defensively, charged with three errors in the two previous games he started.

Friday night, he could have been charged with two. Kiner-Falefa has a -1 defensive runs saved rating heading into Saturday night’s game against the White Sox at Guaranteed Rate Park. He is in the bottom 36 percentile in outs above average.

It’s suddenly been a noticeable struggle for him.

With one out in the first inning on Friday, Kiner-Falefa booted Luis Robert’s ground ball and then bobbled it as he tried to pick it up and what should have been a double-play turned into a bases-loaded situation for Gerrit Cole. The Yankees ace got them out of that one. In the sixth, he couldn’t. The shortstop sailed a throw to first allowing Robert to reach leading off the inning. Kiner-Falefa was not given an error on the play, but the next batter, Sheets, homered.

That cut the Yankees’ lead to 7-3 and Kiner-Falefa immediately dropped his head and Torres went over to give him a pat on the back.

That came on the heels of Kiner-Falefa committing two errors Tuesday night against the Blue Jays — and getting the next day off. Saturday, however, Aaron Boone had him right back in there with no concerns of this snowballing on him.

“No, no. Because I think he is so dynamic and athletic out there that he’ll get through this,” the Yankees manager said. “Look, the plays that he didn’t make last night, he’s got to make those two, but I do think there’s a little bit of a field element that was going on. It’s really soft out there and watching it on both sides, just really tricky hops out there. So I think that played into it. Now you got to work around that. … But no, I’m not worried about it. Long term he’ll kind of get through this and this athleticism will continue to show up as it has most of the year.”

The Yankees asked Kiner-Falefa to be their shortstop this season as a stop-gap. Instead of paying for a big-name free agent, they acquired the athletic infielder — who has played catcher, second base, third base and shortstop — to take over the position from Torres until one of their top prospects develops.

He struggled early on, making shaky plays at short and it took him a while to get through it. Boone, however, sees him as being able to flush the bad plays quickly.

“I think he has the ability to shake it and part of it is because of his athleticism and he plays the position with speed and you see his foot speed out there and his quickness and I think that serves him well and will continue to serve him well,” Boone said.

And Kiner-Falefa’s teammates were quick to …read more

Chris Bassitt and Mets agree to one-year, $8.8 million deal: ‘I love it here’

DENVER — Chris Bassitt was playing a game of chess in Adam Ottavino’s hotel room on Friday night when his agent called him, saying they had a deal in place. Bassitt and the Mets avoided an arbitration hearing, which was set for Monday, when the two sides agreed to a one-year, $8.8 million deal for […]

When Robin Lopez first signed with the Orlando Magic, there was curiosity about what his on-court role would be. Lopez didn’t need a lot of time to see how he fit in. “I’ve always liked to think of myself as a utility guy,” Lopez said shortly after being signed to a 1-year, $5 million contract. […]

Enrique Hernández hit Dylan Cease’s first pitch over the left-field wall. It was the start of a tough Tuesday for Cease and the Chicago White Sox. Cease had his roughest outing of the season in a 16-3 loss to the Boston Red Sox in front of 21,835 at Guaranteed Rate Field. The right-hander allowed a […]