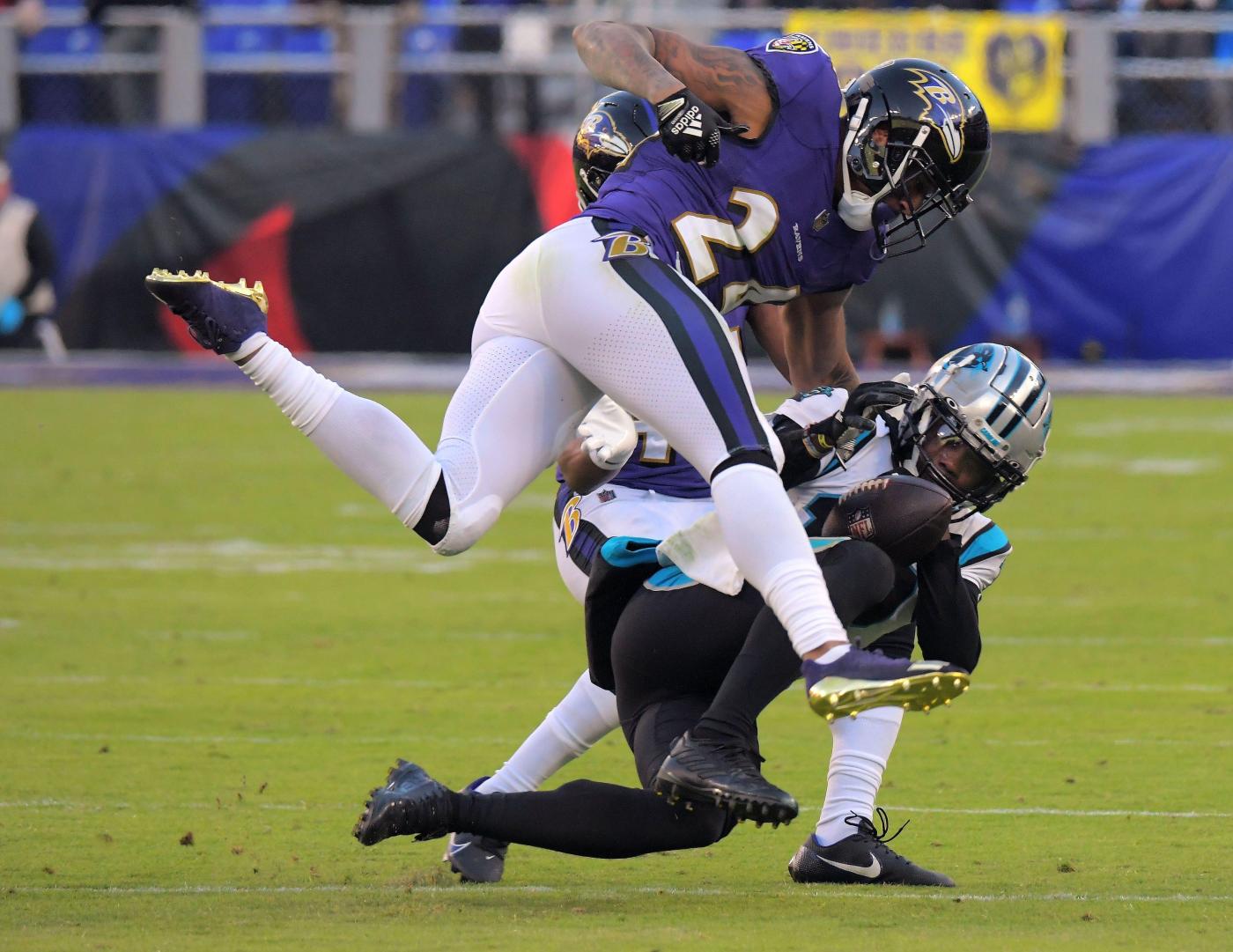 As the Ravens’ offense struggled on a cold and brisk Sunday afternoon at M&T Bank Stadium, star cornerbacks Marlon Humphrey and Marcus Peters provided the spark that lifted Baltimore to a 13-3 win over the Carolina Panthers.

With the Ravens leading 6-3 in the fourth quarter, Peters made a game-changing play, stripping the ball from Panthers wide receiver Shi Smith deep in Carolina territory. Even though the referees blew the play dead, negating a potential touchdown return by Humphrey, the fumble gave a struggling offense a prime chance to score. After a 29-yard run by Kenyan Drake and an offsides penalty against the Panthers, quarterback Lamar Jackson scored on a 1-yard run to give the Ravens a 13-3 lead with 7:20 to go.

Then it was Humphrey’s turn. The two-time Pro Bowl selection read quarterback Baker Mayfield’s pass perfectly, jumping in front of Smith for an interception at Carolina’s 41-yard line with 3:35 left. It marked the second of three turnovers in the fourth quarter for the Ravens’ defense, which has shown dramatic improvement of late.

The resurgence of Humphrey and Peters is a big reason why.

“It’s crazy [to have] two future Hall of Fame cornerbacks on one team, shutting down both sides of the field,” Jackson said after the game. “I feel like that gives our defense a boost at all phases. Those guys are playing out of their minds right now.”

Sunday was a prime example of what the Ravens can look like with Humphrey and Peters healthy and playing at a high level. Peters totaled five tackles, while Humphrey had two tackles, a quarterback hit, a fumble recovery and tied his career high with his third interception of the season. When Humphrey was the nearest defender, he didn’t allow a reception on two targets in 31 coverage snaps, according to the NFL’s Next Gen Stats.

With solid play from Peters and Humphrey mixed with consistent pressure by the defensive line, the Ravens sacked Mayfield four times and held him to a 54.6 passer rating. Panthers star wide receiver DJ Moore (Maryland) had just three catches for 24 yards.

“We obviously had a rough first half of the season,” said Humphrey, who has 37 tackles, six pass deflections and a pair of fumble recoveries through 10 games. “[There were] a couple of games early, but since then I think we’ve been showing that we can be [an] elite defense.”

Before linebacker Roquan Smith was traded to the Ravens from the Chicago Bears last month, he admired Humphrey and Peters from afar. “Those guys have had some heck of careers,” he said. “They just keep getting better.”

Last season, Baltimore didn’t have the luxury of having Peters and Humphrey on the field at the same time. Peters suffered a torn ACL before the season opener while Humphrey missed the final five games with a torn pectoral muscle. With a secondary devastated by injuries, the Ravens allowed the most passing yards in the league.

Heat hit 20-game mark with little sense of what might come next; Jimmy Butler out again Friday

Typically, an NBA team has a sense of identity and direction by the time it hits its 20th game. For the Miami Heat, that 20th game comes Friday night. But this has been such an atypical season that coach Erik Spoelstra not only is reserving judgment, he practically is tabling any such deliberation in favor […]

Wind Creek Hospitality, which is building the south suburban casino, has announced a partnership with the Chicago Bulls under which the Wind Creek Chicago Southland Casino and Resort will become the team’s official casino. Wind Creek and the Bulls said the six-year agreement will include in-game promotions and that fans attending games at the United […]

Chicago Bulls face a turning point ahead of a 6-game road gauntlet: ‘You need to be a desperate team’

The Chicago Bulls are facing a turning point. That might feel melodramatic — after all, it’s only one month into the season. More than 60 games remain in the regular season, which could feel like plenty of time to turn around a 6-10 record. But on the heels of a four-game skid entering Monday night’s […]