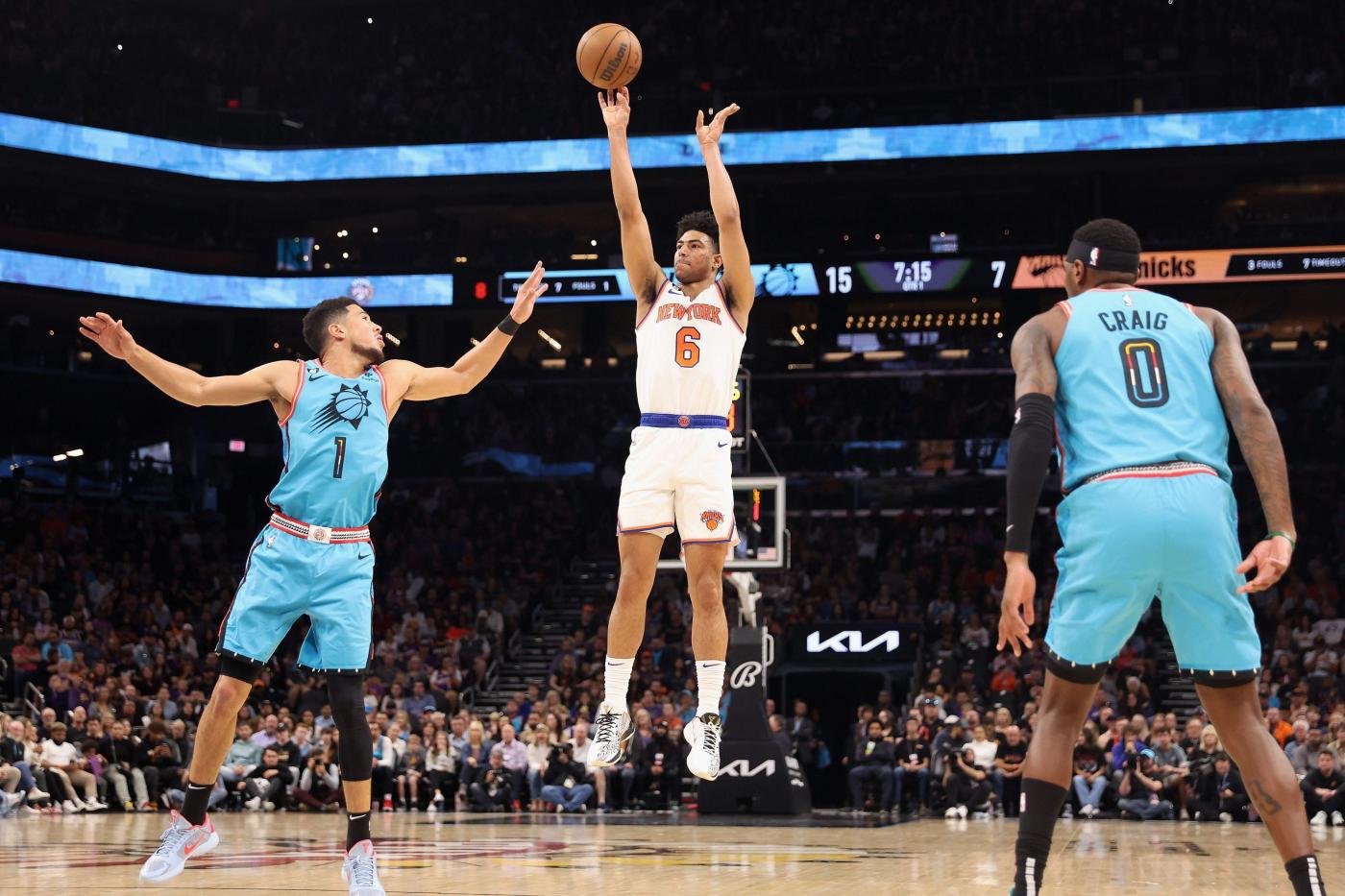 PHOENIX — It was frustrating for Quentin Grimes. The uncertainty of an unpredictable pain.

For all of training camp and much of this season, Grimes was dealing with a sore foot that would come and go like basement WiFi.

His big opportunity was delayed, and possibly squandered. In Tom Thibodeau’s rotation, there’s a fine line between starting and a DNP. Just ask Evan Fournier or Cam Reddish.

Still, Grimes kept his faith. And if it’s true the Knicks refused to include Grimes in a package for Donovan Mitchell, he had good reasons to believe the next chance was around the corner.

“I don’t think I ever thought I blew [my chance],” Grimes said. “I know who I am and what I can do. I know the way Thibs feels about me, and how the organization feels about me. I just had to wait for my opportunity, and it was gonna come. Our team in general somebody is going to get hurt, nicked up.”

With Cam Reddish out because of a sore groin, Grimes started Sunday’s 116-95 loss to the Suns and logged more minutes (32) than he had the rest of the season combined. It was largely a positive performance from the 22-year-old, even if the team result was dreary.

He scored 10 points with five rebounds and a career-high eight assists, drawing praise from Thibodeau before leaving the Phoenix arena, coincidentally named the Footprint Center, without any pain in his left foot.

“It feels good. Like nothing really. Feel like I can play on it right now,” Grimes said. “I think I’m pretty much back to 100 percent so I’ll be good for the next game.”

Grimes’ injury was frustrating but hardly devastating. He said the heel was inflamed around the fat pad and tests showed no structural damage. The only cure was rest to allow the inflammation to calm. It sounds like plantar fasciitis but Grimes has stated that diagnosis was ruled out.

Nonetheless, the pain reemerged at least twice following games — including after Grimes’ first start of the season on Nov. 4 in Philly — and Thibodeau put the shooting guard’s chance on ice. For the last two weeks before Sunday, Grimes was available but on the fringe of the rotation.

He found a silver lining in the benching because it allowed his foot to further heal.

“Like the trainer (Anthony Goenaga) said, ‘You can’t really tell when the pain is going to happen,’” Grimes said. “So you do as much treatment as you can, stay off it, stretch it as much as you can. But I felt like we hit a good point the last couple weeks of being able to maintain it.”

Grimes’ greatest asset to the Knicks is defense, which is at a premium on this roster. But he also flashed playmaking potential during an exceptional Summer League in July, which created a buzz about Grimes’ second NBA season.

The 25th overall pick out of Houston, who trains in the offseason with Penny Hardaway, was in line for heavy minutes.

Then the foot pain started.

ASK IRA: Should Heat not turn their back on youthful energy even when whole?

Q: Ira, you mentioned that if Nikola Jovic remains in the rotation that Duncan Robinson might be the odd man out. But what about Haywood Highsmith or Jamal Cain? Both have played well lately. Aren’t they deserving of playing time? – Guy. A: But you can’t play everyone. That said, there is something to be […]

For Ravens, Lamar Jackson’s viral tweet is another social media reminder: ‘It’s not going to be a nice place’

Three days after the Ravens’ first collapse of the season, cornerback Marlon Humphrey’s phone was still making him mad. The Ravens had squandered a 21-point fourth-quarter lead in a 42-38 home loss to the Miami Dolphins, and Humphrey, one of the team’s most social-media-inclined players, was letting himself get angry all over again. “Dang, bro,” […]

The Nets have a solution to Kevin Durant’s minutes problem. A healthy TJ Warren. Durant entered Friday’s matchup against the Toronto Raptors as the NBA’s leader in total minutes played (844), total points scored (699) and field goals made (246), as well as second in both free throws attempted (183) and made (169). That is […]