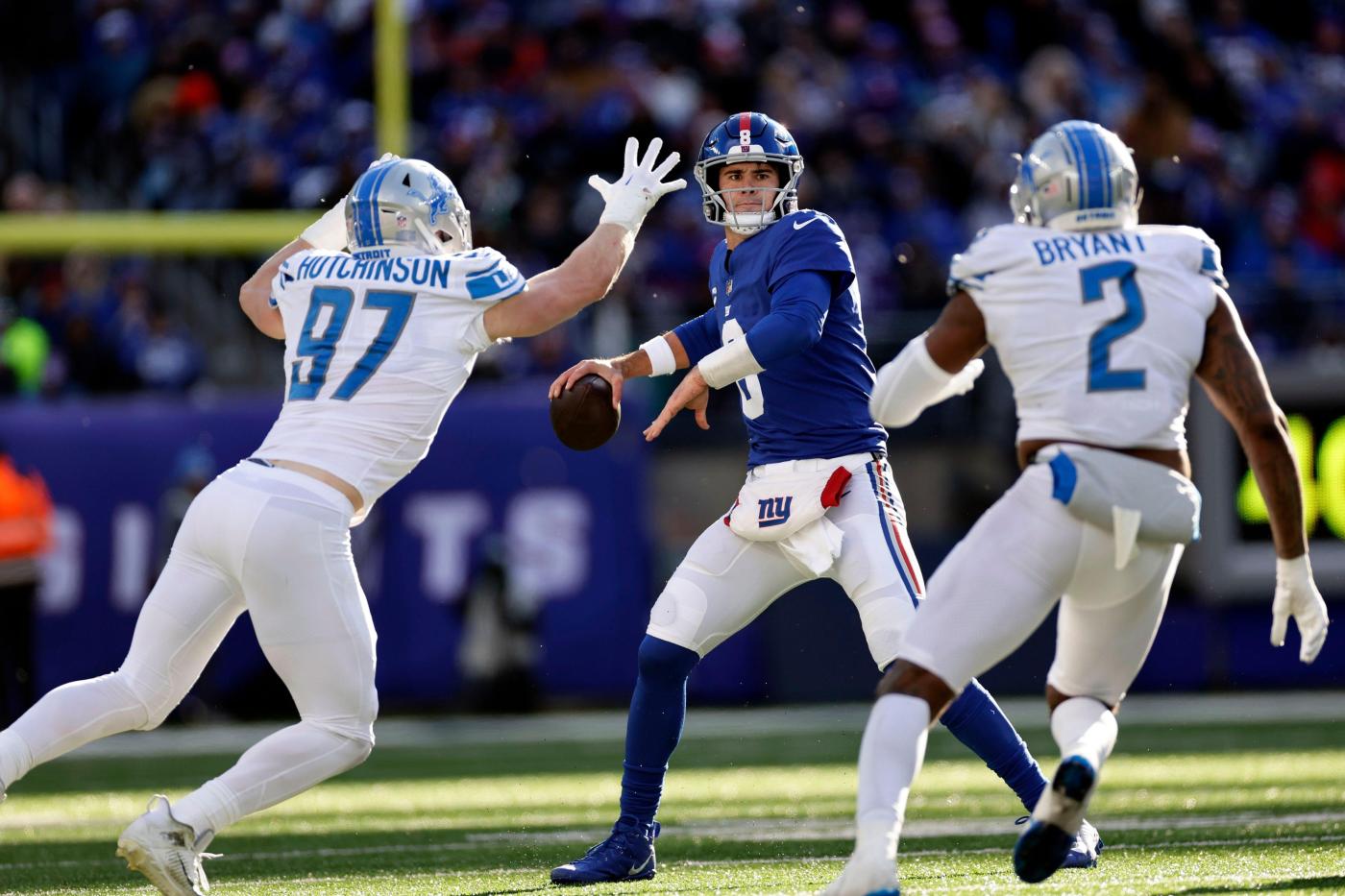 Daniel Jones threw two interceptions, and the Giants turned the ball over three times in their worst performance of the season, a 31-18 loss to the Detroit Lions inside a cold and windy MetLife Stadium.

“We’re all pretty disappointed with our effort today and how we played,” Jones said. “Not up to our standard. Not up to what we’re capable of doing.”

Saquon Barkley was held to 22 rushing yards on 15 carries. Lions running back Jamaal Williams barreled in for three rushing touchdowns.

“Hard to win a game when you have three turnovers and you don’t get any,” head coach Brian Daboll said.

The Giants were the only team in the NFC East to lose on Sunday. The Eagles (9-1), Cowboys (7-3) and Commanders (6-5) all won. The Giants’ playoff odds plummeted from 76% to 51% based on those Week 11 results, per FiveThirtyEight.

Thursday’s Thanksgiving Day NFC East showdown against the Dallas Cowboys will give Daboll’s team a chance to bounce back quickly. But it’s fair to wonder if they’ll be able to continue battling through being one of the most injured teams in the league.

“It was a lot,” Barkley said of how many teammates went down.

“No one feels sorry for us,” Feliciano said. “If you dwell and you lose to Dallas, you’re 7-4. You can’t. Gotta keep going.”

The Lions (4-6) scored 14 points off the Giants’ turnovers: one after Jones’ first interception in the second quarter, and another after receiver Isaiah Hodgins’ fumble in the fourth. Detroit built a commanding 24-6 lead early in the third quarter and never looked back.

“We didn’t execute the way we wanted, and that’s on us,” Jackson said. “We can’t harp on it too long because we play in three days. But at the same time keep that taste in your mouth a little bit, understand you don’t like how it ended up.”

Jones completed 27-of-44 passes for 341 yards, a TD and two INTs. Robinson had a career-high nine catches for 100 yards, but Robinson had to be carried into the locker room — while putting no weight on his right leg — after his final catch on the Giants’ sideline in the second half.

The Lions came in as the NFL’s second-worst rushing defense, but Barkley never got going. Daboll started Shane Lemieux at left guard in his season debut but benched him at halftime for rookie Josh Ezeudu. Matt Peart replaced the injured Phillips at right tackle.

“If the run game’s not going, you’ve kind of tied one hand …read more

Initial thoughts from Broncos’ 22-16 overtime loss to the Las Vegas Raiders in Week 11 at Empower Field at Mile High: Kendall Hinton, the No. 1 receiver we deserve: Forget all the Klint Kubiak talk. The real reason the Broncos broke their first-possession touchdown drought? More Kendall Hinton. (We kid, but only a little). With the […]

Winderman’s view: Max Strus has a moment on a night that belonged to Celtics

Observations and other notes of interest from Wednesday’s 134-121 loss to the Boston Celtics: – On any other night, arguably against any other opponent, this would have been about Max Strus’ third quarter. – When the Heat forward scored 19 points in playing all 12 minutes in the quarter, shooting 5 of 7 on 3-pointers. […]