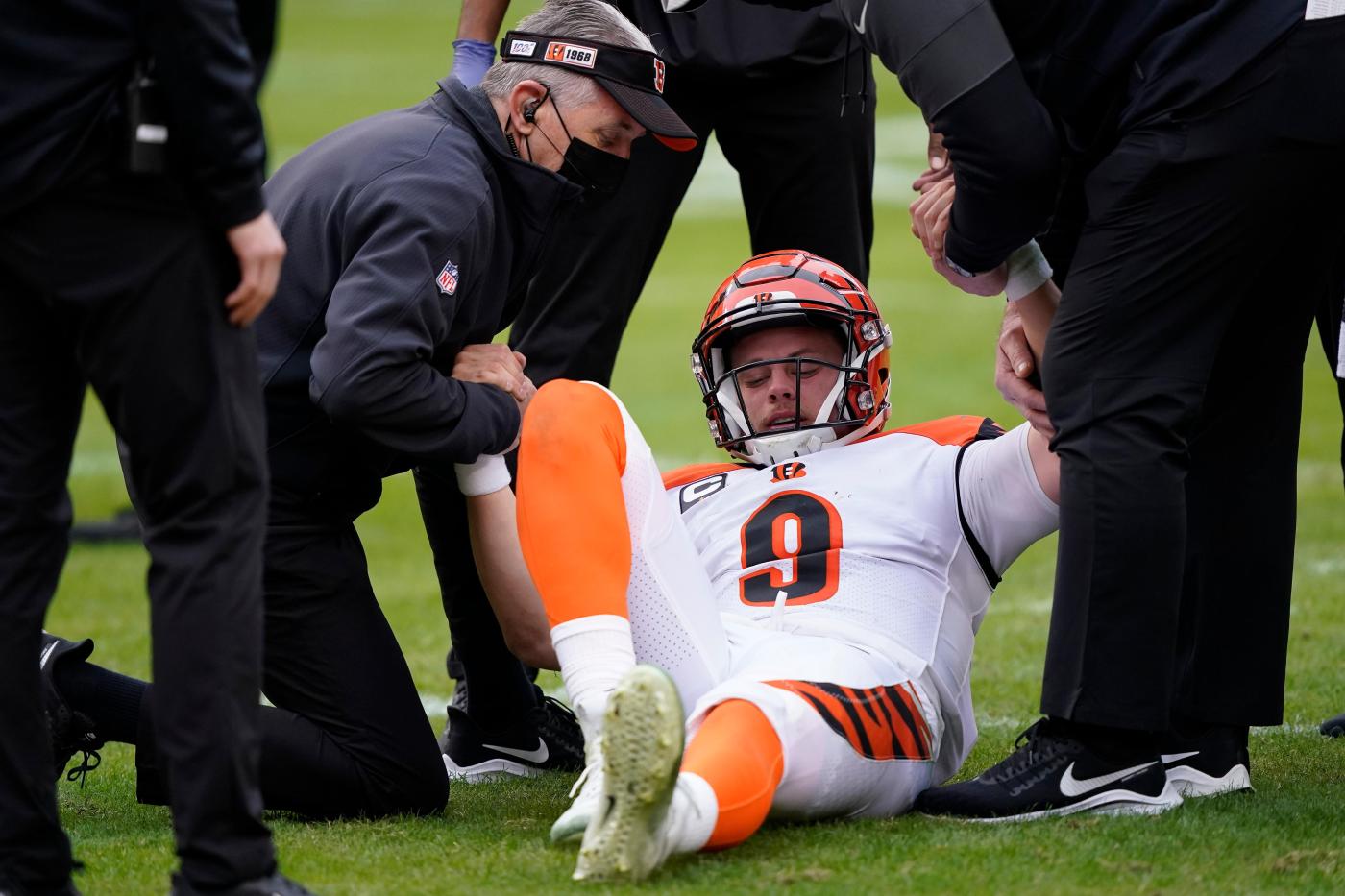 LANDOVER, Md. — Joe Burrow couldn’t put any weight on his left leg as he was helped onto a cart. Cincinnati Bengals teammates and Washington opponents flooded over to show support before he was driven off.

A knee injury to the No. 1 pick and franchise quarterback not only contributed to the Bengals’ 20-9 loss Sunday but derailed their season built around giving Burrow as many snaps as possible.

“Thanks for all the love,” Burrow tweeted. “Can’t get rid of me that easy. See ya next year.”

If that’s indeed it for Burrow’s rookie season, he was 264 of 404 for 2,688 yards and 13 touchdowns in 10 games. He had 203 yards and a TD pass in putting Cincinnati ahead of Washington before getting hurt.

Burrow had been sacked 32 times this season, but this injury happened after he got rid of the ball. Washington linemen Montez Sweat and Jonathan Allen hit Burrow high and low, and the QB’s left leg bent the wrong way.

“Seeing that sucks, especially when you know the person,” said Washington receiver Terry McLaurin, who played with Burrow at Ohio State. “One thing I do know about Joe, he’s a resilient guy. I’m praying for him. He’s a guy that when he gets knocked down, he comes back stronger.”

Not long after Burrow was taken off, the team ruled him out with a left knee injury, pressing 2019 fourth-round pick Ryan Finley into duty. Finley finished 3 of 10 for 30 yards and an interception in the final minutes that ended a long-shot comeback bid.

Taylor didn’t put all the blame on Finley, saying the Bengals as a team didn’t get the job done. Washington sacked Finley four times after not getting to Burrow once before halftime.

Burrow had been a bright spot Sunday and all season for the Bengals and the NFL. He entered with the third most completions and second most attempts in the league, most recently shaking off a gimpy ankle injured in a blowout loss to unbeaten Pittsburgh.

Keeler: CU Buffs coach Karl Dorrell is the Pac-12’s football Coach of the Year, because nobody’s done more with less

BOULDER — We don’t know if Karl Dorrell was Colorado’s second choice as head coach. Or its fifth. But it looks like a stroke of pure genius now. Your clubhouse leader for Pac-12 Coach of the Year pulled another rabbit out of his hat in the cold mountain air Saturday, this time on short notice, […]

The Denver Nuggets and free agent forward JaMychal Green have agreed on a 2-year, $15 million contract, a league source told The Denver Post, fortifying their frontcourt in the wake of Jerami Grant’s departure to Detroit. The deal can’t become official until Sunday when contracts can be signed. Related Articles Jerami Grant agrees to 3-year, […]

The best meteor shower of the year starts Friday. Here are the best ways to watch.

One of the strongest meteor showers of the year is set to begin this week, and sky watchers are eagerly awaiting their peak in two weeks because there will be no moonlight then to obscure viewing. The Geminids begin Friday and will be active through Dec. 17. When they reach their peak Dec. 13-14, the […]