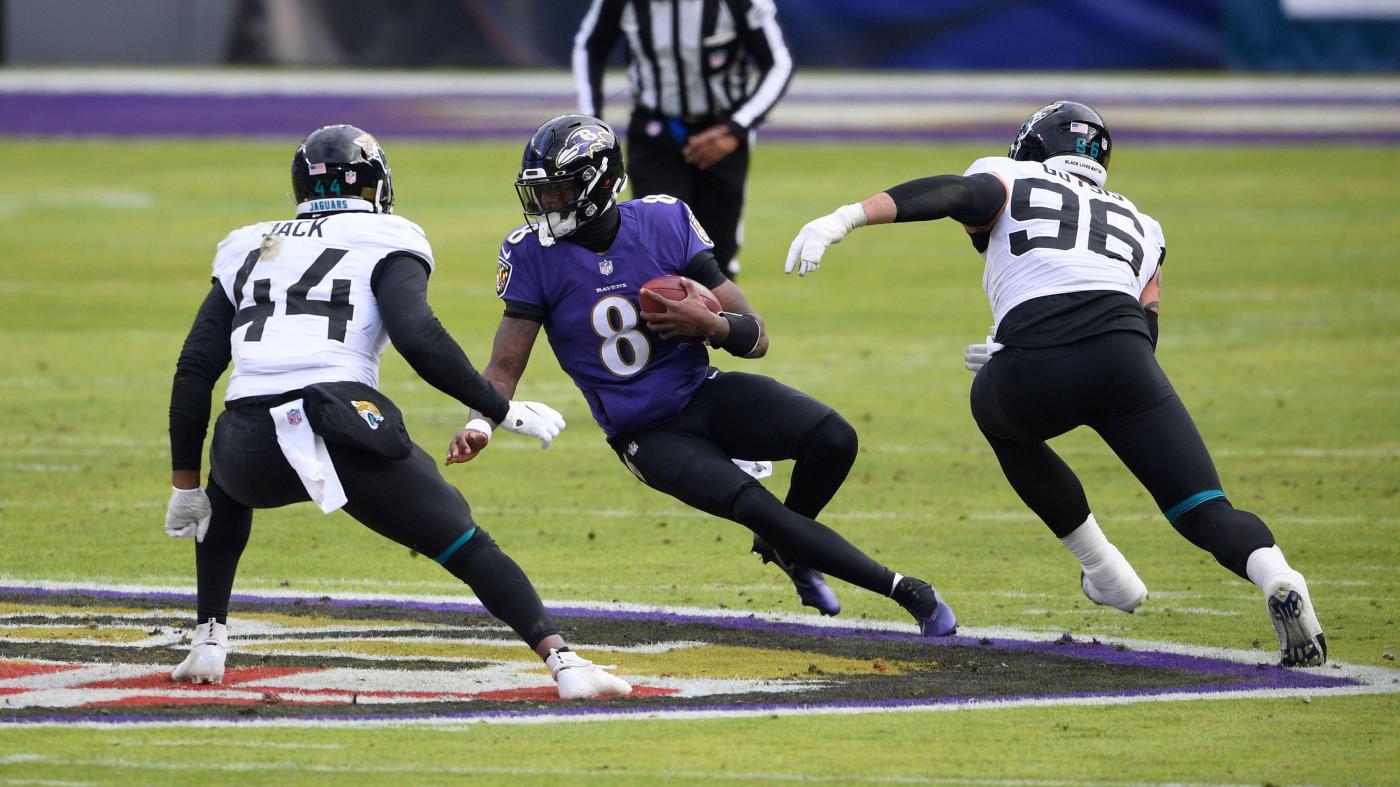 Here’s how The Baltimore Sun sports staff views the outcome of Sunday’s Week 12 game between the Ravens (7-3) and Jacksonville Jaguars (3-7) at TIAA Bank Field:

Jaguars 21, Ravens 20: Jacksonville has had an extra week to prepare for Lamar Jackson and this Ravens offense, which seems stuck in neutral and could be without Ronnie Stanley. Travis Etienne will be a great test for the Ravens’ revamped run defense, but Christian Kirk poses the biggest threat on that side of the ball. Would the Ravens trust a banged-up Kyle Hamilton to handle him in the slot? If not, how often can Marlon Humphrey shadow him? This Jaguars offense is better than its record suggests.

Ravens 28, Jaguars 21: If the Ravens turn in an offensive dud against Jacksonville like they did against the Panthers last week, they will lose. Jacksonville quarterback Trevor Lawrence is capable of making big plays and the Jaguars are better coached than a year ago. Overall, Baltimore has more talent but the Ravens need to bring at least their “B” game, not that less-than-average performance from a week ago.

Ravens 23, Jaguars 16: The Ravens cannot afford a flat performance against the Jaguars, who run the ball efficiently and string together first downs when quarterback Trevor Lawrence is on form. Jacksonville has not been blown out all season, so expect a nail-biter before the Ravens assert themselves with superior defense and more reliable special teams.

Ravens 24, Jaguars 14: Even though the Jaguars have lost six of their last seven games, the Ravens shouldn’t take this game lightly. Jacksonville has the NFL’s No. 13 offense, according to Football Outsiders’ efficiency metrics, and running back Travis Etienne Jr. has rushed for more than 100 yards in three of the past four games. But the Ravens’ defense will continue its recent stretch of dominance while Lamar Jackson and company will regain some offensive rhythm.

Jaguars 23, Ravens 21: The Jaguars are the only team with a losing record to produce a positive point differential this season, having outscored opponents by 11 points. Quarterback Trevor Lawrence is an above-average quarterback with superstar traits, and he’s got a solid group of weapons around him. Jacksonville’s defense is vulnerable, but it’s not facing the best version of the Ravens’ offense, especially if Lamar Jackson is banged up. All signs point to an upset.

Ravens 24, Jaguars 13: I am a believer in this Ravens’ defense, which is hitting its stride and should make life difficult for Trevor Lawrence, who has played better of late with only two interceptions in his past five games. The Jaguars are coming off their bye week, so health could be a factor, but they simply don’t have the talent the Ravens have. How long can Lamar Jackson and the offense scuffle? I suspect not much longer as he has a solid performance to carry Baltimore to an easy victory.

4 things we heard from the Chicago Bears, including an update on Justin Fields and what happened on that 2nd-down QB run

Coach Matt Eberflus and Chicago Bears players spoke with reporters Monday at Halas Hall after Sunday’s 27-24 road loss to the Atlanta Falcons. Here are four things we learned about quarterback Justin Fields and the Bears’ Week 12 game at the New York Jets. 1. Eberflus said Fields is ‘day to day’ with a left […]

Ravens quarterback Lamar Jackson practiced for a second straight day Friday, indicating he will likely be ready to start Sunday against the Jacksonville Jaguars after he was sidelined by a hip injury earlier in the week. “It’s getting better,” he said after practice, though he did not say how much the injury bothered him during […]