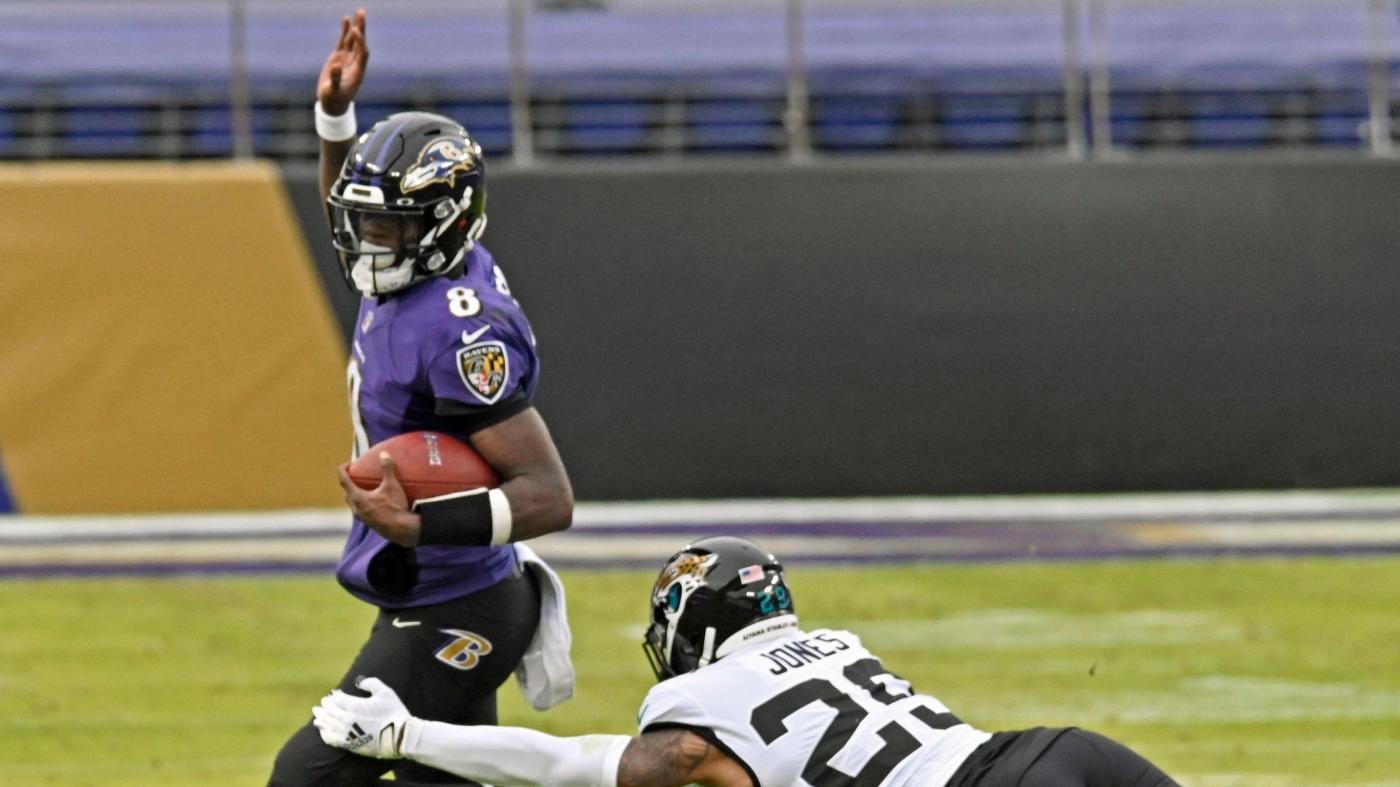 The Ravens have won four straight while the Jaguars have lost six of their last seven. So this one should be easy, right? Not so fast. Jacksonville has a formidable offense when quarterback Trevor Lawrence is on his game. Will the underdogs hold any advantages in their matchup with the Ravens?

In the midst of a sloppy offensive performance, Lamar Jackson connected on all nine of his throws to wide receiver Demarcus Robinson in the Ravens’ 13-3 win over the Carolina Panthers. Robinson has emerged as the team’s top outside threat in the absence of Rashod Bateman. Tight end Mark Andrews also came back from a week lost to injury in fine form, playing 64 of 69 offensive snaps and catching six passes on eight targets. The Ravens seem to have forgotten wide receiver Devin Duvernay, who started the season so well. Jackson has targeted him just once in each of the last two games. Rookie tight end Isaiah Likely also faded to the background with Andrews in the lineup, catching one pass for one yard on three targets. With a paucity of pass catching talent compared to other top contenders, the Ravens need to squeeze more out of the receivers they do have. Their pass protection, so good in recent weeks, suffered a blow when left tackle Ronnie Stanley left the Carolina game with an ankle injury. Patrick Mekari has played well as a stand-in, but Stanley’s elite pass blocking and mobility are essential.

The Ravens will face one of the league’s worst pass defenses when they travel to Jacksonville. The Jaguars rank 12th in pressures per drop-back but have just 16 sacks to show for it. They have a few talented starters in cornerback Tyson Campbell, a second-round pick in 2021, and outside linebacker Josh Allen, a first-round pick in 2020. Devin Lloyd is a prolific playmaker in the middle, though he struggles in coverage. They don’t have a lot of defenders who scare anybody.

Trevor Lawrence, the No. 1 overall pick in 2021, has been erratic in his second season, mixing brilliant games against the Indianapolis Colts and Los Angeles Chargers with stinkers against the Denver Broncos and Houston Texans. The Jaguars tend to rise and fall with his performance, but their offense is by no means toothless, ranking 11th in pass DVOA, per Football Outsiders. Wide receiver Christian Kirk (52 catches on 82 targets, 679 yards, seven touchdowns) is Lawrence’s favorite target. Wide receivers Zay Jones (47 catches on 65 targets) and tight end Evan Engram (36 catches on 51 targets) have also produced as underneath options. Jacksonville’s pass protection, anchored by tackles Cam Robinson and Jawaan Taylor, is solid.

The Jaguars will face a Baltimore defense that gave the Panthers fits on Sunday, sacking Baker Mayfield four times and picking him off twice. The Ravens blitz less frequently and generate fewer pressures than the Jaguars but rank eighth in the league with 31 sacks, an equation …read more

It helped that Oskar Olausson’s corresponding call-up to the Avalanche roster was a journeyman. Jayson Megna understands just how strenuous and stressful the process of acclimating to the NHL can be, so he offered to accommodate Olausson after learning Tuesday that they would both be in the Avalanche lineup the next day. “Reached out and […]

The Giants aren’t American Airlines: they still want Odell Beckham Jr. on board. The team still plans to host OBJ on Thursday and Friday for a free agent visit, even though Beckham was escorted off a Sunday flight from Miami to Los Angeles, the Daily News has learned. Maybe the incident adds a question to […]

The Nets have a solution to Kevin Durant’s minutes problem. A healthy TJ Warren. Durant entered Friday’s matchup against the Toronto Raptors as the NBA’s leader in total minutes played (844), total points scored (699) and field goals made (246), as well as second in both free throws attempted (183) and made (169). That is […]