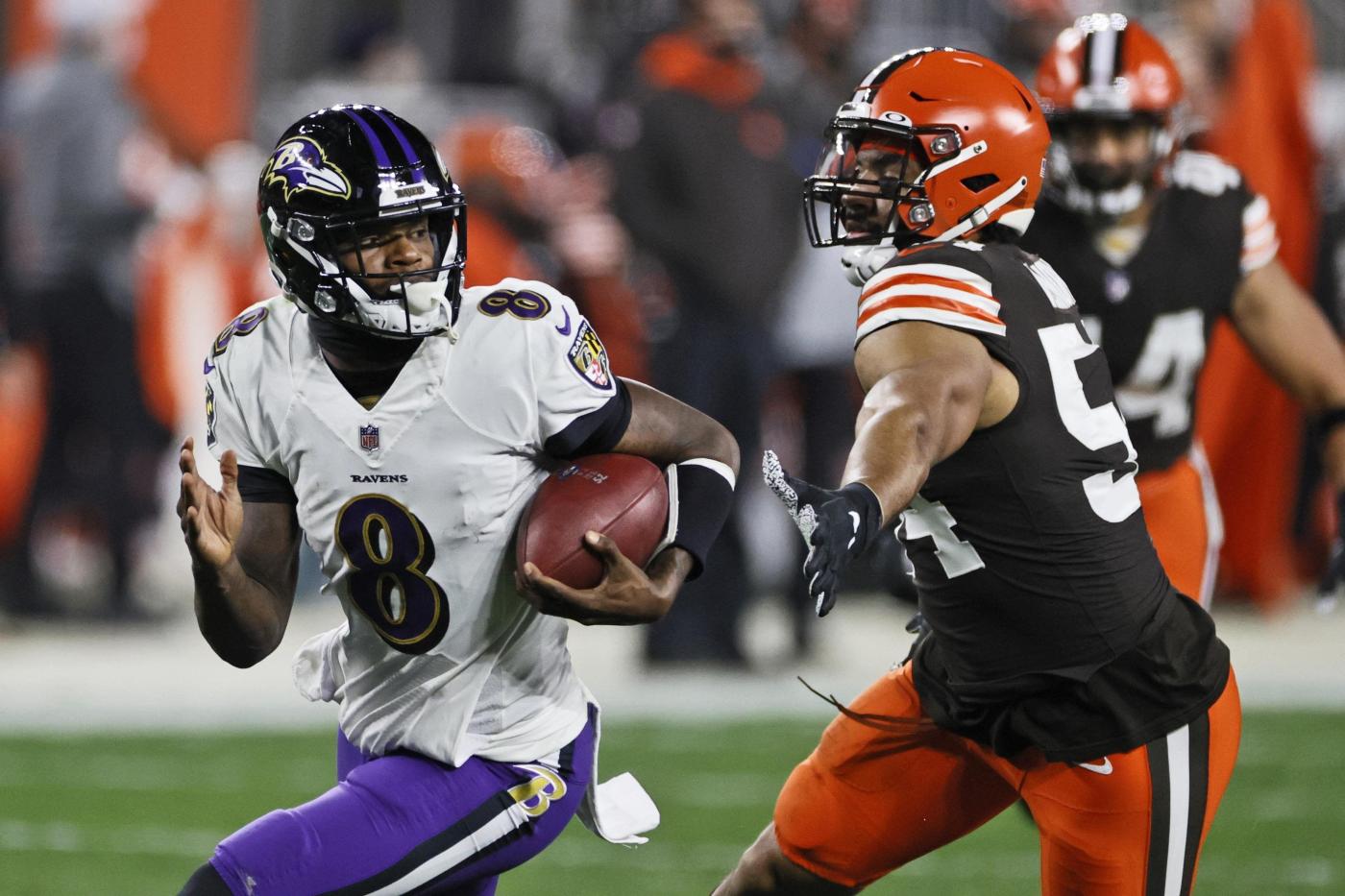 Here’s how The Baltimore Sun sports staff views the outcome of Sunday night’s Week 12 game between the Ravens (7-3) and Cleveland Browns (6-5) at M&T Bank Stadium:

Browns 21, Ravens 20: Welcome back to the AFC North, where predictions aren’t even worth the paper they’re printed on. On offense, the Ravens will have to establish their running game or else risk having Lamar Jackson overrun by pass rushers. On defense, the Ravens won’t have to worry much about Baker Mayfield or Jarvis Landry, but can their front seven hold up against one of the NFL’s best offensive lines? At some point, the Ravens’ success in nail-biters will start to even out. Sunday’s game could be one of those games.

Ravens 21, Browns 17: Cleveland will give the Ravens trouble because the Browns have physical interior linemen lines on both sides of the ball. The Browns will be able to get a lot of pressure on quarterback Lamar Jackson but Jackson, assuming he plays, will be the difference in the game. He is superior to Cleveland quarterback Baker Mayfield and his elusiveness will allow him to make several big plays.

Ravens 27, Browns 23: This is one of the most difficult matchups of the year to parse. The Browns could present serious problems with their league-best running game and elite defenders, but they have only played up to their potential a few times this season. They never know what they’re going to get from battered quarterback Baker Mayfield. If the Ravens have a relatively healthy Lamar Jackson, they will pull out a win late.

Ravens 24, Browns 20: There’s no telling what type of quarterback Baker Mayfield will be on Sunday night. However, Cleveland has an elite rushing attack and defensive end Myles Garrett is going to give the Ravens offensive line problems. Quarterback Lamar Jackson has said numerous times that he doesn’t like to play down-to-the-wire games. Unfortunately for him, this game has the makings for a close finish and the Ravens will need their star quarterback to help them pull out a win.

Ravens 27, Browns 24: With health concerns surrounding both starting quarterbacks, this is a tough one to predict. But if Lamar Jackson is back to full strength, he’ll be happy to see the Browns on the schedule. Jackson is 4-1 as the starting quarterback against Cleveland, with 10 touchdown passes and four rushing touchdowns in those games. I’m more confident in Jackson bouncing back from his illness than Baker Mayfield playing through knee, heel and shoulder injuries, no matter how tough they say the Browns starter is. The Ravens will have a hard time blocking Myles Garrett and Jadeveon Clowney, but a healthy Jackson will be the difference-maker Sunday night.

Ravens 24, Browns 17: All eyes will be on Lamar Jackson to see how he recovers from his illness, but if history is any indication, he’ll be just fine. In his first game back after testing positive for COVID-19 …read more

Here’s a look at how the Miami Dolphins (5-7) and New York Giants (4-7) match up in six key areas ahead of Sunday’s Week 13 game at Hard Rock Stadium (1 p.m., FOX): When the Dolphins run: The Dolphins are at least starting to utilize the run game enough where opponents have to respect it, […]

CSU leadership explains how Jay Norvell hire happened so quickly: “We ran with speed like no other”

Colorado State needed only four days to replace Steve Addazio with Jay Norvell as the program’s head football coach. How did it happen so quickly? “We ran with speed like no other,” CSU president Joyce McConnell said at Norvell’s introductory news conference Tuesday inside the Iris & Michael Smith Alumni Center. CSU athletic director Joe […]

Could WR Devin Duvernay be used more like Deebo Samuel? Answers are in the Ravens’ ‘vault.’ | NOTES

Wide receiver Devin Duvernay has been one of the Ravens’ most electric playmakers when he gets the ball in his hands. The problem is, that hasn’t happened too often this season. As a punt returner, Duvernay is leading the NFL with 15.1 yards per return on 23 returns. As a receiver, Duvernay has 24 catches […]