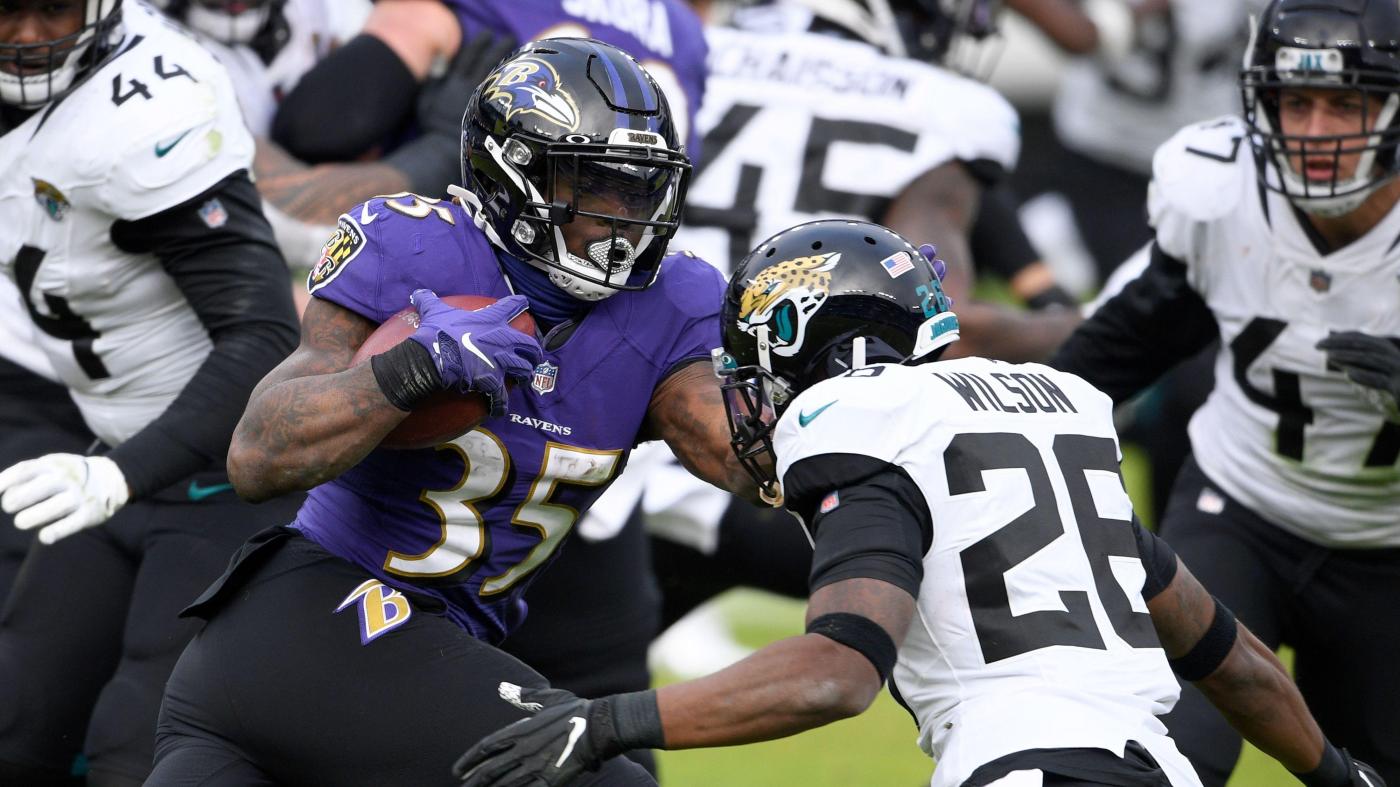 The Ravens are solid favorites over the Jaguars ahead of their game Sunday in Jacksonville, according to Las Vegas sportsbooks.

After a 13-3 win Sunday over the Carolina Panthers, the Ravens (7-3) are favored by four points in their Week 12 matchup. The Jaguars (3-7), who are coming off a bye, have lost six of their past seven games and three of their past four games at TIAA Bank Field.

The Ravens, winners of four straight, have covered the spread in all but one of their five road games this season, a Week 6 loss to the underdog New York Giants. Jacksonville is 2-2 against the spread at home, including a 27-20 win over the Las Vegas Raiders in Week 9.

The Jaguars should be fairly healthy after the week off, as none of the players listed on their Week 10 injury report were held out of their road loss to the Kansas City Chiefs. Under first-year coach Doug Pederson, Jacksonville has the NFL’s No. 11 offense and No. 13 special teams unit, according to Football Outsiders’ efficiency metrics, but ranks just No. 26 on defense.

The Ravens, meanwhile, are still awaiting the return of running back Gus Edwards (hamstring/knee), and it’s unknown whether left tackle Ronnie Stanley (ankle) and rookie safety Kyle Hamilton (knee) will be available after leaving Sunday’s win.

Jacksonville leads the all-time series against the Ravens 12-10. The teams have traded wins and losses over their past nine meetings, with the Ravens winning their most recent game two years ago, 40-14, in Baltimore. The Jaguars won in their last home game, routing the Ravens, 44-7, in 2017.

The over-under for Sunday’s game is 44 points.

He’s not immortalized with a statue outside Hard Rock Stadium, like some social media memes have suggested he should be, but offensive tackle Laremy Tunsil makes his return to South Florida when the Miami Dolphins (7-3) host the Houston Texans (1-8-1). Ahead of the Sunday 1 p.m. kickoff at Hard Rock Stadium, it seems like […]

Until Sunday, it was a relatively simple exercise to pick out the Miami Heat’s best road victory of the season. There was the Oct. 26 victory over the Portland Trail Blazers, in the Heat’s road opener – and that was it. Sunday night, what had been a road to ruin turned into a 106-98 victory […]

After Aaron Judge, here are 3 things Yankees need to focus on at Winter Meetings

The Yankees will touch down in San Diego for the Winter Meetings on Sunday with multiple areas that need improvement. While bringing back Aaron Judge is the main focus and provides most of the headlines, Brian Cashman has plenty of other items on his to-do list for a franchise that has now gone 13 years […]