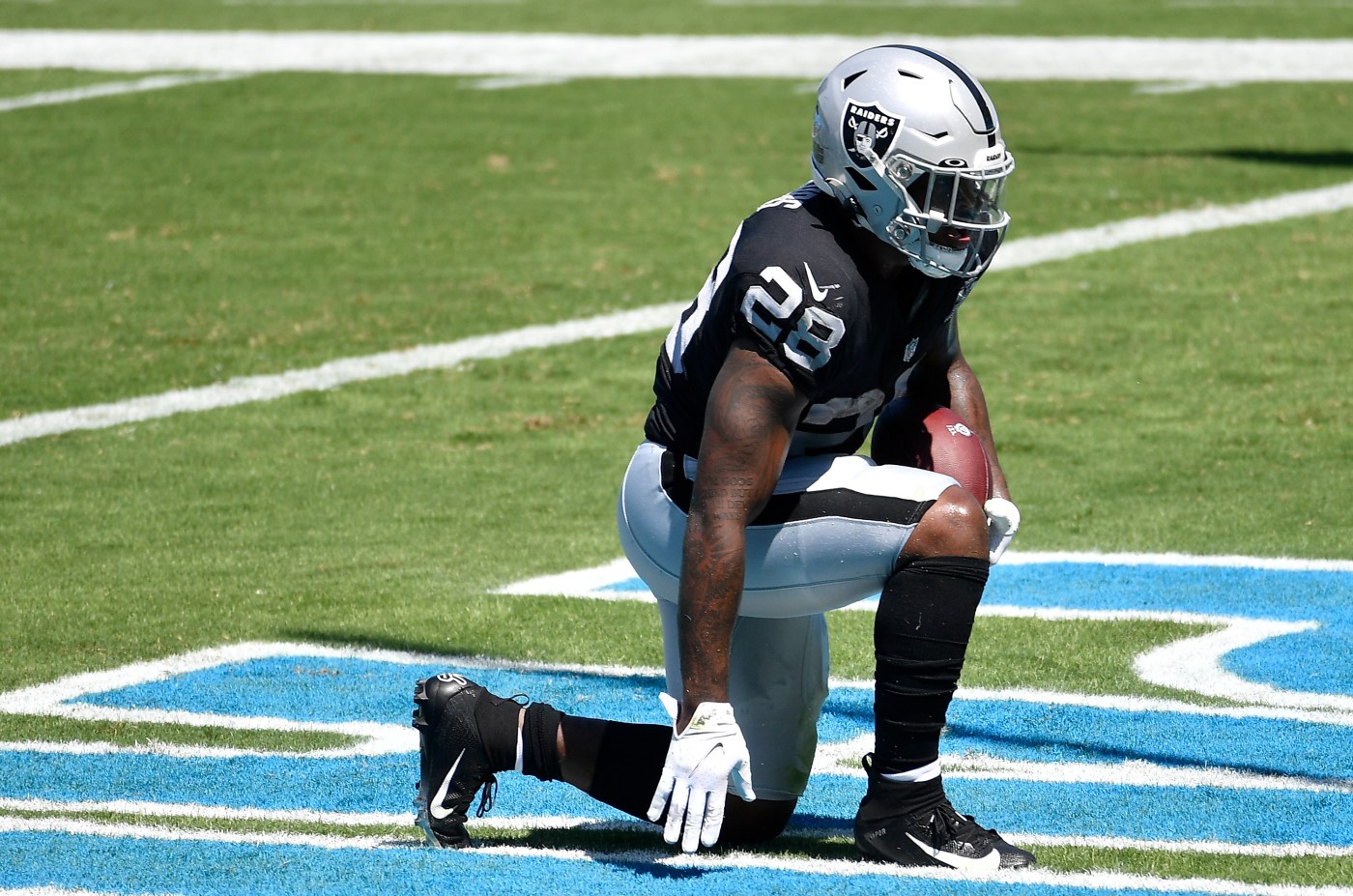 Josh Jacobs scored three touchdowns and the Raiders came up with a big stop on fourth-and-1 Sunday in opening the season with a 34-30 win over the host Carolina Panthers.

Jacobs scored on runs of 1 and 7 yards and 6 yard — the first Raiders player to score three touchdowns in an opener. Derek Carr hit Nelson Agholor with a 23-yard touchdown pass and Daniel Carlson connected on field goal attempts of 20 and 54 yards to round out the scoring.

For Carolina, Teddy Bridgewater threw a 75-yard touchdown pass to Robby Anderson, Christian McCaffrey scored on a 6-yard run and Joey Slye had field goals of 47, 46 and 31 yards.

Highs, lows and all you need to know from the Raiders’ opener:

Panthers stuffed: Alex Armah was stuffed on fourth-and-1 with 1:11 to play with the Raiders taking over at the 56-yard line after Carolina inexplicably gave the ball to someone other than Christian McCaffrey. Clelin Ferrell and Raekwon McMillan did the honors.

Whitehead’s big penalty: The Raiders took a 34-30 lead on a drive kept alive by Tahir Whitehead, who failed to turn around on a third-down pass from Carr to Hunter Renfrow. Jacobs’ third touchown from the 6 capped a 75-yard, nine-play drive that took 4:21 off the clock.

The big play: With the Raiders leading 27-22 after a punt, Bridgewater’s big strike to Robby Anderson for 75 yards marked the sixth lead change of the day. Anderson then caught the two-point pass for a 30-27 lead.

Anderson got past rookie Damon Arnette and then Erik Harris missed a tackle attempt with 8:29 to play.

Needed shutdown drive, didn’t get it: With Carolina within 27-22 and the Raiders defense taking some hits physically, the Panthers forced their first punt since the opening series with 9:27 left. Jacobs was dumped for a loss to put the down-and-distance behind schedule, and Carr had a thir-and-12 pass intended for Waller broken up by Rasul Douglas.

Questionable strategy: Carr was called for intentional grounding on the Raiders opening drive of the second half, which set them up near midfield after Hunter Renfrow’s 27-yard punt return.

After getting it to fourth-and-6, the Raiders tried to draw Carolina offsides. Then they burned a time out when the Panthers didn’t bite.

Carlson salvaged some points with a 54-yard field goal for a 20-15 lead with 9:38 left in the third quarter.

Abram lays the wood: Safety Johnathan Abram, injured in Week 1 a year ago, was active in the secondary and unloaded on McCaffrey after a three-yard run in the third quarter.

Kwiatkoski out: Middle lineabacker Nick Kwiatkoski, signed to be the Raiders defensive signal caller, was ruled out after a pectoral injury in the third quarter.

LAKE BUENA VISTA, Fla. — Michael Malone wanted to address the elephant in the room as soon as possible. After Anthony Davis’ gut-punch 3-pointer to win Game 2, Malone began his team’s film session on Monday by breaking down the costly miscommunication. He didn’t want it lingering. Malone felt it was the easiest way to […]

MAMARONECK, N.Y. — The older he gets, the more difficult it gets for Tiger Woods. He is one victory away from setting the PGA Tour career record, and it’s been that way since January. Every major he plays this year is a chance to tie the mark for the most titles in each one. He […]

No Raiders on the field for the national anthem before their 2020 season opener knelt in protest Sunday in Charlotte. Instead, the team linked arms on the sideline of Bank of America Stadium in an apparent show of unity after a summer of American unrest over police violence against Black people. Head coach Jon Gruden […]