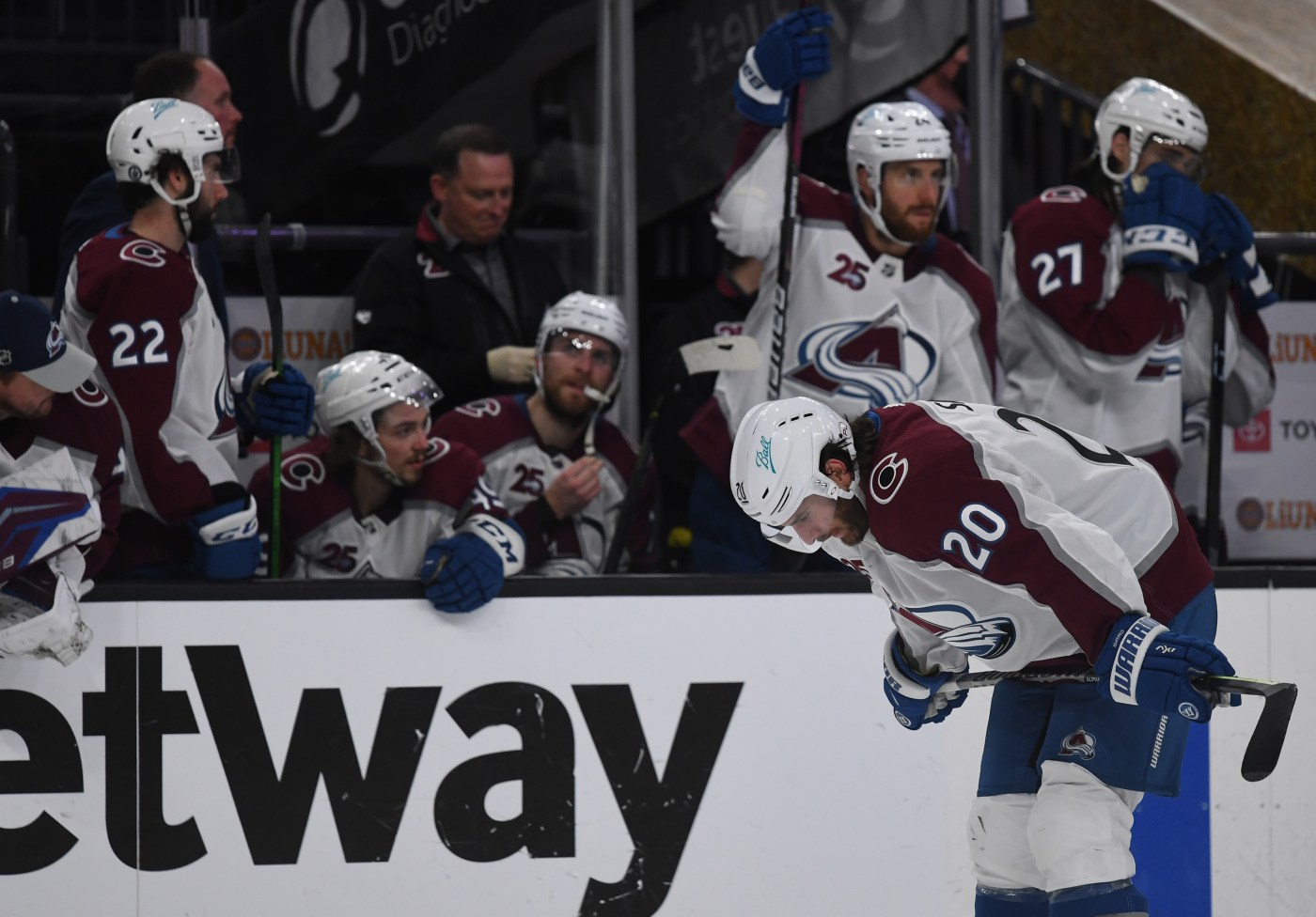 LAS VEGAS — Identifying the positives for the Avalanche is difficult for a team that thrilled its fan base in the regular season and the first round of the playoffs, only to lose four consecutive games to Vegas.

The Avalanche left Las Vegas with a hangover that’s bound to last throughout the offseason, which began Friday. The targeted start date for next season is Oct. 12.

Positives for the 2021 seasons were many but difficult to find in the immediate aftermath of their shocking end to their season, a 6-3 loss to Vegas in  Game 6 here late Thursday. The Avs, the No. 1 overall playoff seed, became the fourth divisional top seed to bow out of the playoffs.

“It’s tough to find any (positives) because nobody wants to play just a good regular season and then lose in the second round,” Avalanche right winger Mikko Rantanen said. “I know all of us wanted to win, and that’s what we were pushing for. So right now it’s tough to find positives.”

The negatives? Playoff inconsistency from the top line and costly turnovers, particularly in the final two games during which the Avs outshot and generally outplayed the Knights but lost anyway. And Colorado didn’t get enough saves from goalie Philipp Grubauer, who finished with a 3.18 goals-against average and .901 save percentage in the series.

“What’s going through my head right now is just disappointment,” Avalanche coach Jared Bednar said after his team finished 6-4 in the postseason. “You see the look on our guys’ faces, how much they want it, how much they care, and how hard they’re working. To come up short, it just hurts.

“Guys put a long year into work and commitment and dedication to the team, and you don’t get to where you want to go, so it’s disappointing.”

The Avalanche has a strong returning core under contract and excellent young players on pace to replace a handful of unrestricted free agents who will move on and free up cap space. Grubauer and left wing/team captain Gabe Landeskog are the two UFAs the Avalanche undoubtedly wanted to bring back.

But both struggled in the latter part of the Vegas series. Landeskog failed to produce a shot in regulation in Games 3, 4 and 5 and was turnover-prone. His leadership, as well as Bednar’s, was questioned during the 0-4 season-ending skid.

Avalanche-Knights Game 6 Quick Hits: Make no mistake, this was a collapse

Avalanche vs. Golden Knights live blog: Real-time updates from Game 6 of the second round of the Stanley Cup Playoffs

Mile High MVPs: Looking back at Colorado’s most valuable player award winners prior to Nikola Jokic

With Nikola Jokic selected as the NBA’s Most Valuable Player on Tuesday, the Denver Nuggets center became just the eighth athlete in the history of Colorado’s four major professional sports teams to be named league MVP. Here’s a look at the previous seven: Avalanche MVPs Since the Quebec Nordiques relocated to Denver and became the […]

Kiszla: Seven playoff losses. Eight days of heartbreak. Why does loving the Avs and Nuggets have to hurt so much?

Hey, we all know love hurts. But why do the Avalanche and Nuggets have to do us like this? Seven playoff losses. Eight days of heartbreak. The championship dreams for our local NHL and NBA teams? Dead. And gone. Gone too quickly to even say a proper goodbye. Don’t know about you, but I can’t […]

Three red-zone touchdown passes delivered with equal parts velocity and aggressiveness during the final period of the Broncos’ opening minicamp practice Tuesday confirmed quarterback Drew Lock’s mindset. “My confidence is high right now,” he said. “I’m just excited with where this is going. I see a lot of things we’re building on and we get […]