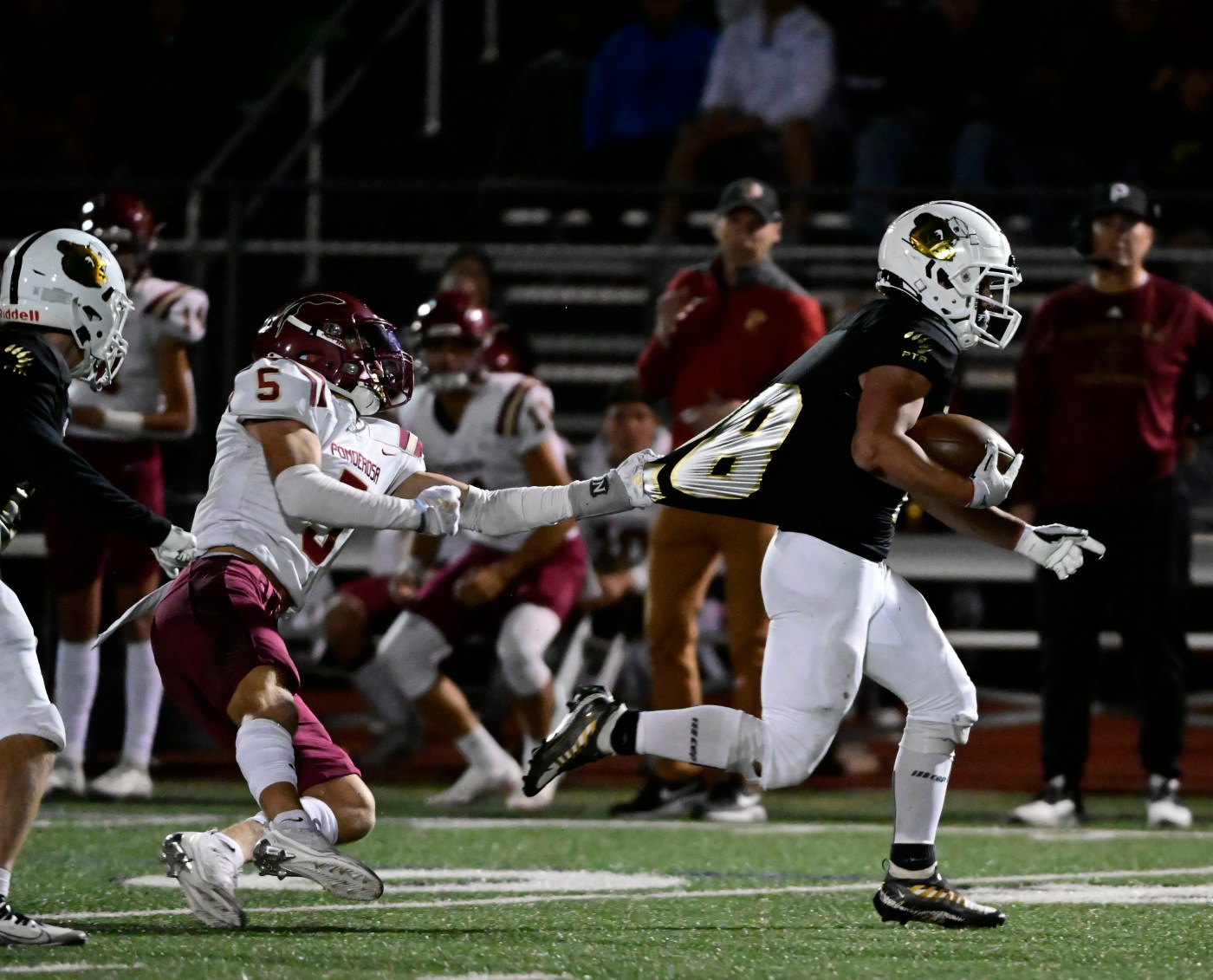 MONUMENT — In a battle of Class 4A heavyweights between No. 1 Ponderosa and No. 3 Palmer Ridge, the home team needed somebody sharp to come through.

Nathaniel “Gator” Robinson delivered on the strength of his nickname with a three-touchdown performance to help take down Friday night’s prey at Don Breese Stadium in Monument in an impressive 48-34 win.

“Growing up in Texas, even when I was four or five years old playing tackle, I’d always take out the biggest dudes and really hand it to all of them that were above me,” Robinson said.

With the win and Robinson’s three scores, Palmer Ridge (5-0) made a case why it should move up to the top spot in the CHSAA Class 4A poll.

“We really don’t have a crack in our system,” Bears quarterback Derek Hester said.

Ponderosa (4-1) opened the game with a long drive as Mustangs quarterback Zach Stryker, who would finish the night with three touchdowns himself, got into a solid rhythm with a 13-play march, but it stalled out at the 15-yard line and kicker Logan Matthews drilled a 25-yard field goal to make it 3-0 with 8:15 remaining in the open frame.

The Bears had an answer of their own on its opening drive. After a strong kickoff return in which the Bears started on their 40-yard line, Hester led an 8-play, 60-yard drive which was capped off with a short 1-yard score from Robinson, the 5-foot-9 senior, to make it 7-3 with 4:54 left in the first quarter.

With both teams still attempting to get into a defensive rhythm, Stryker led a 12-play, 70-yard drive that ate up four minutes. It resulted in a touchdown run in which he ran behind a huge offensive line push from two yards out for the Mustangs’ first touchdown to make it 10-7.

After the teams exchanged three punts between them and Ponderosa added a second field goal to make it 13-7, the Mustangs thought they had a huge momentum swing, as Max Mervin intercepted a pass deep in Ponderosa territory and returned it to his team’s 45-yard line.

Two plays later the game swung back in the Bears’ favor as Chris Rice was on the receiving end of a tipped pass and sprinted 50 yards the other way for a score to give the Bears their second lead of the game at 14-13.

Both teams added a final score before the half, as Mustangs scored on a 10-play drive with a walk-in score from Stryker while Bears’ QB Hester scored from a yard out with just 12 seconds left and the teams went into half tied at 20.

It was an equally high-flying third quarter with a 21-point quarter between the teams.

The Bears got off to a fast start in their opening possession with a 10-play drive that saw Robinson score from a yard out to make it 27-20 with 7:37 left in the quarter. Two plays into …read more

Miami Dolphins wide receiver River Cracraft plans on keeping the football from his first career regular-season touchdown, which sparked the team’s fourth-quarter comeback in Baltimore, right next to his bed. “Something I’ll hold onto forever,” Cracraft said of the 2-yard touchdown reception. “Definitely a highlight. Would like to keep those coming. It’s a starting point.” […]

Tua Tagovailoa’s T-shirt after Miami Dolphins practice one day this week read: “I wish it were hotter.” First-year head coach Mike McDaniel uses the phrase often to remind his team they have to embrace Florida’s sweltering, humid conditions – and that their opponents can’t. But it doesn’t get any hotter than Tagovailoa’s left arm entering […]