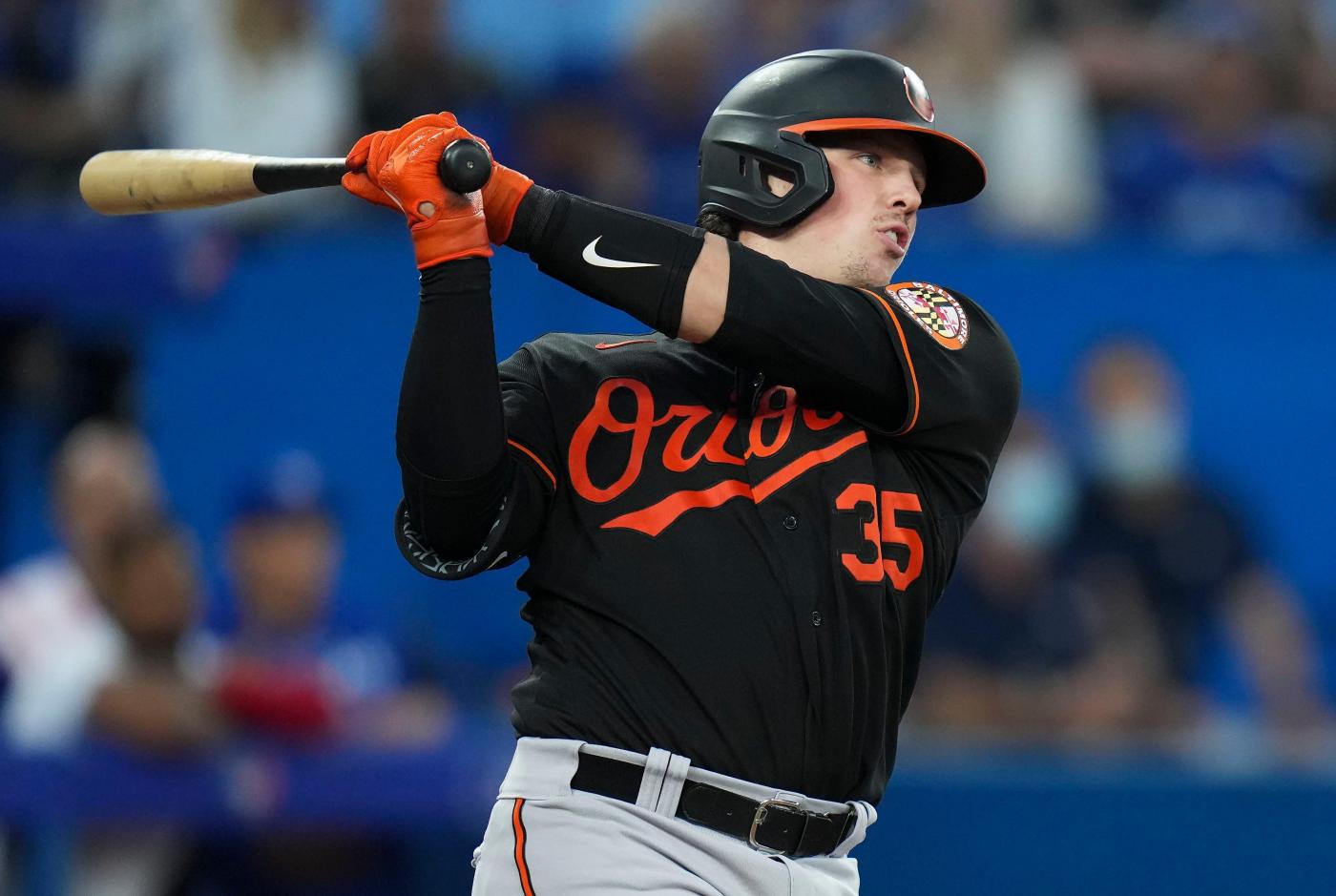 There have been swings that hinted this was on the horizon, an eventuality Adley Rutschman would soon achieve if Orioles fans were patient enough to wait.

Well, the wait is over.

The rookie catcher hit the first home run of his major league career in the fourth inning Wednesday night against the Toronto Blue Jays, crushing a ball on a line to straightaway center field. Rutschman, the top prospect in all of baseball, took care of his first two big league RBIs with that swing, too, driving home Austin Hays.

Rutschman has displayed that power throughout his minor league career, but it took until his 84th plate appearance with Baltimore to see a ball leave the yard. His homer — coming off an elevated four-seam fastball from right-hander José Berríos — traveled an estimated 411 feet and left his bat at 103.2 mph, ending Berríos’ budding no-hit bid.

Rutschman went on to add a double in the seventh inning of the eventual 7-6 loss in 10 innings, an exhibit of his gap-to-gap power and what could be cause for a sigh of relief.

“Naturally, you definitely take a load off whenever you hit your first home run. You’re able to breathe a little bit more,” said first baseman Trey Mancini, who was on home run chain duty Wednesday. “He’s at the catching position, which is kind of double duty when you’re a rookie. But he’s handling himself so well, but I think there’s a degree of relaxation and kind of the metaphoric deep breath you really can take after your first homer.”

When Rutschman reached the dugout, he received the team’s home run chain and was pulled into a lengthy hug from Mancini, the longest tenured Orioles player. The pressure on Rutschman has been immense. The weight of a rebuild has been placed on his shoulders — at least externally, as the organization attempts to minimize an idea so imposing.

Mancini didn’t plan that hug. He felt it came on naturally, and he recalled how former Orioles star Manny Machado had given him a hug when Mancini went deep for the first time in 2016.

“It was kind of a full-circle moment,” Mancini said. “Just felt like Adley deserved and needed a hug right there, because it’s a great feeling.”

The Oregon State product’s first career home run occurred at roughly the same time Machado, now with the San Diego Padres, recorded the 1,500th hit of his career. Machado was traded to the Los Angeles Dodgers at the midseason deadline in 2018, a move that signaled the beginning of a rebuild that eventually led to Rutschman becoming the first overall draft pick in 2019. The young catcher’s arrival in the big leagues signals the next step of the Orioles rebuild is underway — with a potential turnaround on the horizon.

Rutschman has struggled to find results early in his major league career. In 20 games entering Wednesday, he batted .176 with four doubles and a triple. But the advanced analytics have been more promising. His average exit …read more

NBA draft preview: Chet Holmgren’s case for the Magic to draft him at No. 1

Among the top prospects in the NBA draft, there isn’t a more polarizing one than former Gonzaga big man Chet Holmgren. When speaking with personnel around the league, there’s a greater sense of certainty in the kind of players former Duke forward Paolo Banchero and Auburn forward Jabari Smith Jr. will be at the next […]

The Colorado Avalanche host the Tampa Bay Lightning in Game 5 of the Stanley Cup Final on Friday night at Ball Arena. A win in Game 5 would mean the Avs bringing home the Cup for the first time in 21 years. Click here for live updates of tonight’s game. …read more Source:: The Denver […]

Column: It’s up to Lance Lynn to save the Chicago White Sox season with his pitching — and fire in the dugout

Apologies are in order to Lance Lynn, whose assignment Monday night in Detroit was to save the Chicago White Sox’s season. Against all odds, the season remained salvageable, in spite of a rash of hamstring and knee injuries, a lackluster offense, boneheaded mistakes on the bases and in the field, and head-scratching decisions by manager […]