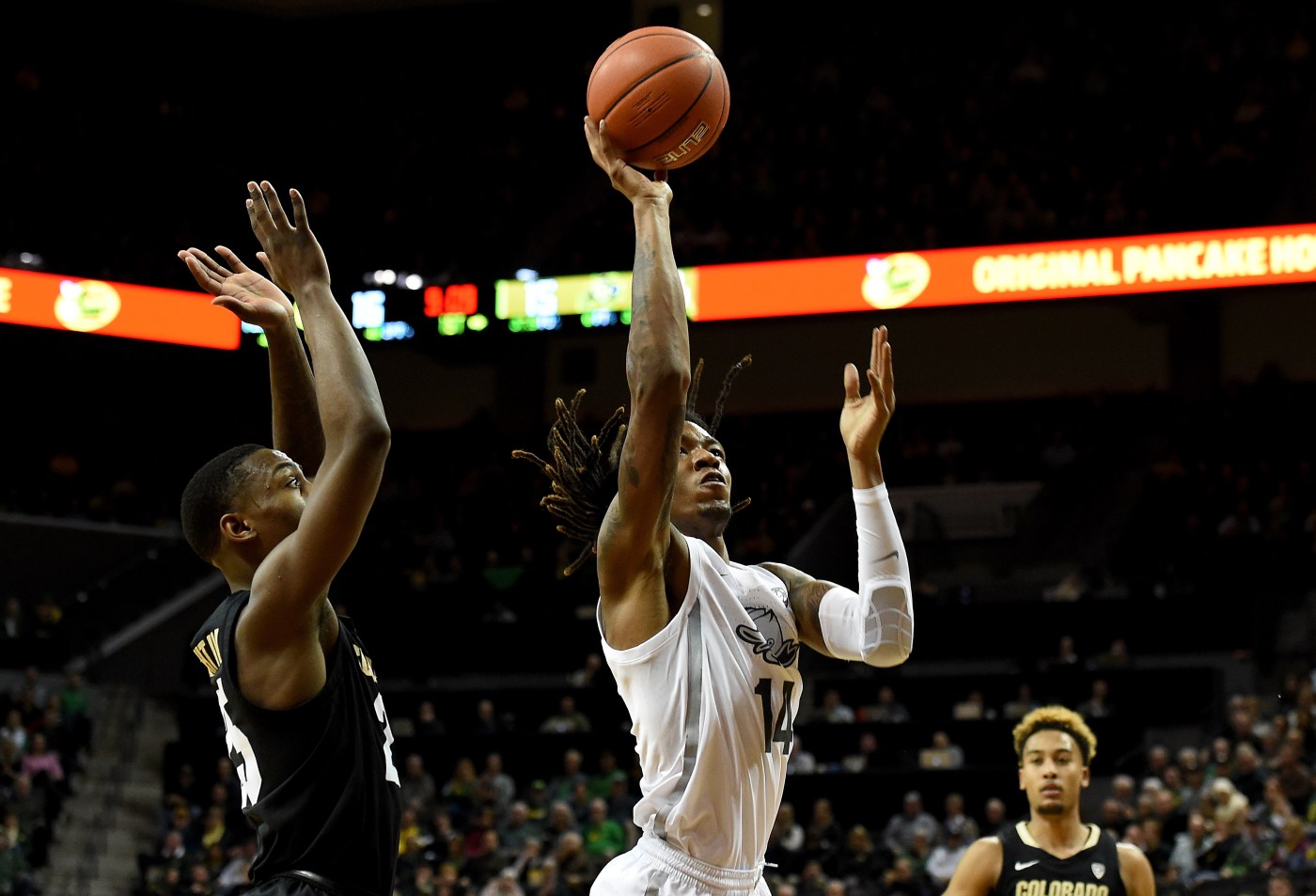 EUGENE, Ore.— The Colorado Buffaloes have harbored regrets about how they performed in their two toughest road games of the season, losing lopsided showdowns that turned into routs against nationally-ranked Kansas on Arizona.

The Buffs will be a little more satisfied with the effort they turned in during a top-20 battle Thursday night at Oregon, though they will be equally disappointed with the result.

Despite a balanced scoring attack, an often smothering defense in the first half, and a torrid night at the 3-point line, the 16th-ranked Buffs couldn’t get it done at crunch time, dropping a 68-60 decision against the 17th-ranked Ducks.

Oregon used a late 12-0 run to pull away, earning a split of the season series with CU while pulling into a first-place tie with the Buffs atop the Pac-12 Conference standings.

After a slow start from both sides the Buffs erupted in the middle of the first half, reeling off 20 consecutive points to take a 14-point lead with just under four minutes remaining in the first half. Six different Buffs players scored during the 20-0 run, during which CU’s defense forced 11 consecutive missed shots out of the Ducks.

Oregon trimmed CU’s 14-point lead down to seven, but a McKinley Wright-to-Evan Battey bucket gave the Buffs a nine-point lead at the break. Oregon gradually cut into the deficit throughout the second half, eventually tying the game at 58-58 on a pair of Will Richardson free throws with 4 minutes, 18 seconds remaining.

CU went scoreless for over four and a half minutes while Oregon put together its game-changing run late in the second half.

Three players scored in double figures for the Buffs, led by 14 apiece from D’Shawn Schwartz and Evan Battey. After holding Oregon to a .323 shooting percentage in the first half, the Ducks shot .467 in the second half.

Oregon’s Will Richardson scored 17 of his game-high 21 points after halftime, while Ducks senior guard Payton Pritchard finished with 15 points, 11 rebounds, and six assists

The Regis Jesuit Raiders easily handled the Castle View Sabercats by a score of 62-39 on Tuesday. In their next games, Castle View will play host to Highlands Ranch, while Regis Jesuit will travel to play Mountain Vista. No team or player statistics have been reported for this contest. More Colorado High School Basketball Subscribe […]

The Pueblo West Cyclones easily handled the Pueblo East Eagles by a score of 63-24 on Monday. Pueblo West was paced in scoring by Hannah Simental who put up 19 points while also collecting four rebounds and three assists. Marissa Leyva helped the effort by contributing 11 points and three rebounds. Pueblo East was lead […]

STANFORD — Michaela Onyenwere had 29 points and 10 rebounds, and No. 10 UCLA pulled away from No. 6 Stanford late for a 79-69 women’s basketball victory Friday night that moved the Bruins into a tie for second place in the Pac-12 with the Cardinal. Kiana Williams scored 25 points, but it wasn’t enough to […]