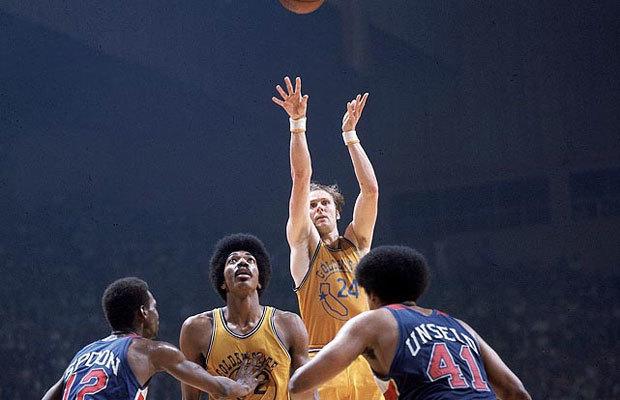 Rick Barry was a scoring genius from the first moment he pulled on a pair of tube socks. He led the NCAA in scoring during his time at Miami. He led the NBA in scoring in only his second season with the Warriors. He jumped to the Oakland Oaks and led the start-up ABA in scoring.

But he never scored like he scored on March 26, 1974, 46 years ago. In the penultimate game of a disappointing season for the Warriors, Barry let it all hang out, scoring a career-high 64 points — 45 in the second half.

Only Wilt Chamberlain and Elgin Baylor had ever scored more in an NBA game.

Also on this date, Warriors owner Franklin Mieuli held court before Barry’s virtuoso performance to announce he would be more hands-on after watching his club fail to make the playoffs for just the second time in time in eight seasons. In fact, Mieuli’s pregame unburdening almost overshadowed Barry’s brilliance.

“As of today,” Mieuli told reporters, “you see a new Franklin. My general manager, coach and players will know I’m going to be there.

“We put together what I thought was the nucleus of the best team in the league. It may have been a fact that I didn’t ride herd as much as I should. But as of today I am a visible, miserable, available and present Franklin. There will be some changes, I can promise you that.”

How Olympics postponement affects the Warriors

Klay Thompson’s 37-point quarter was ‘like a religious experience’

Mailbag: Who should the Warriors draft? And why not Obi Toppin?

One of those changes: hiring an assistant coach to help head coach Al Attles.

Among the disaffected was Barry himself. “What significance is this now?” he asked. “All those points don’t mean (expletive). It’s nice to score that many but the individual stat means nothing. Now, if I’d done it when it meant something, I’d have something to talk about.”

Pac-12 in the age of COVID-19: Coaches, athletes use social media to spread the word about stopping the spread

Prohibited from taking the field, court, pool, course, track and trails — and any other competitive surface — Pac-12 coaches and athletes have been active on social media during the COVID-19 shutdown. And they have been active with a purpose, producing dozens of Public Service Announcements aimed at encouraging fellow students and the general public […]

There won’t be any co-champions coming out of this year’s state basketball tournaments after the final two days of competition were canceled due to the coronavirus pandemic. But, in recognition of the unprecedented circumstances that the players had to deal with, CHSAA is giving a medal to every boys and girls player who participated in […]

Major League Baseball has been here before, caught between a deadly pandemic and the sport’s cherished role as our national pastime. Harsh lessons were learned more than 100 years ago, although few paid heed at the time. The year was 1918 and World War I was in its final, grizzly year. In March, the first […]