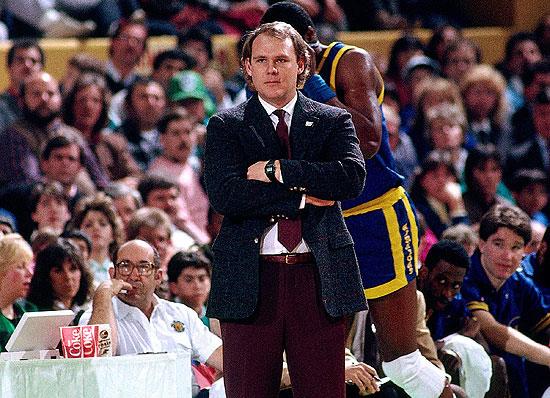 The unveiling of the Warriors’ new regime Friday produced about as many surprises as Al Capone’s vault. Then again, the new folks are hoping to save the surprises for next winter.

The naming of George Karl as head coach and the sale of the Warriors by Franklin Mieuli to Jim Fitzgerald, the new chairman, and Dan Finnane, the new president, had been foregone conclusions.

Only a few major questions had remained. Would the new owners keep Al Attles, a Warriors fixture for the last 28 years, and would they remain at the Coliseum Arena?

Yes they would, on both counts.

Attles will take on the new title of vice president/ consultant and will be in charge of scouting college and NBA players and taking part in player relations. Attles, who was in North Carolina to meet draft prospect Chris Washburn, has been general manager the last three seasons.

“I think it’s well-known that Rick Sund and I are good friends,” Karl said. The new owners also announced that a five-year lease recently had been signed with the Coliseum Arena. They said they stayed with the Arena because of its central location in the Bay Area, easy access and condition of the facility.

Another question — the purchase price — was not answered, but Finnane hinted that the rumored figure of $14 million, less a $4 million loan to Mieuli last June, was on target.

That loan gave Fitzgerald, former owner of the Milwaukee Bucks, and Finnane, a former Bucks director, the option to buy the Warriors. How they would exercise that option apparently was never a mystery to Mieuli.

“He assumed we were going to do it,” Finnane said.

Mieuli, who will remain a minority owner, said goodbye to Warriors employees Tuesday before leaving for a vacation in Europe. Fitzgerald and Mieuli have been friends since Fitzgerald became the Bucks’ owner in 1976, and Mieuli’s former assistant, Ken Macker, said that made the sale easier for Mieuli to bear.

“I think Franklin might have had a terrible time if it hadn’t been for his relationship with Jim Fitzgerald,” Macker said. “Any man who has put as much into it as Franklin has would find it a wrenching experience to divorce himself from the Warriors.”

Though the decision by Fitzgerald and Finnane to buy the team — they have a 50-50 partnership that will own about 70 percent of the franchise — came as little surprise, they apparently left little to chance before making the decision. Finnane moved to San Francisco last September to explore the possibility.

“I don’t believe any market has been researched by buyers like this one has been by Dan and myself,” Fitzgerald said. “If we can’t make it happen here, we’ve done the biggest job kidding ourselves that’s …read more

For more than an hour, Matt Kerstetter’s phone went off like a restaurant buzzer. Usually, it was Tyrie Cleveland, texting again: Hey coach, what do you think about this? These guys are calling me about free agency. As the 2020 NFL Draft hit the seventh round last month, Kerstetter, the offensive coordinator at Westfield High […]

San Jose State defensive lineman Kyane Schmidt, a redshirt freshman from Valley Christian High in San Jose, remains in a coma after suffering a major brain injury in a car accident near Santa Barbara last week, according to his family. San Jose State football player Kyane Schmidt. The 6-foot-3, 228-pound Schmidt was thrown from his […]

The Hardrock 100 ultrarun has been canceled for a second straight year, becoming the latest endurance sporting event in Colorado to be scrapped over health concerns from the coronavirus pandemic. The race’s board of directors announced the decision publicly on Saturday. It’s the fourth time the run has been canceled since it debuted in 1992. […]