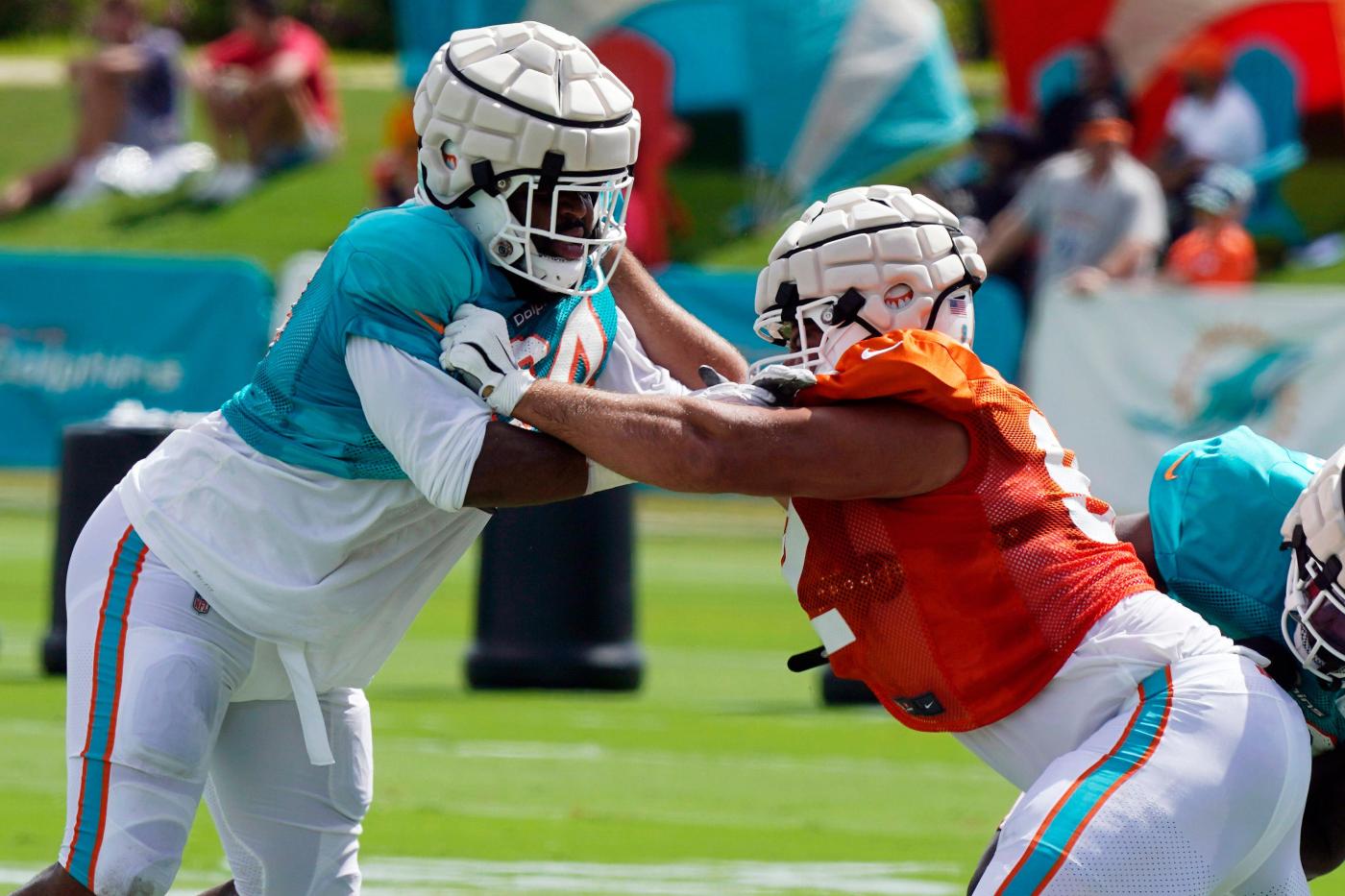 Never underestimate the power of a good playlist because the vibe music can create often sets the tone for whatever you’re embarking on.

So far, the reward system new coach Mike McDaniel created, letting the top performer of the previous day’s practice pick the music for the next session, has been one of the main motivators during training camp’s grueling work, often keeping the practices light and upbeat.

As a result, the playlist creator serves as the center of attention for a day.

Shine in practice with a dominant showing, which must be paired with consistency throughout the week, and an orange jersey and the team’s auxiliary cord is yours.

Players get a text the night before and must come to practice early to deliver the playlist they’ve curated.

Since the spring everyone acts as if receiving playlist power and the orange jersey that comes with it, is the highest honor one could receive from the team.

“It’s exciting,” said linebacker Andrew Van Ginkel, who provided camp’s most well-rounded playlist on Friday. “You get a text that says that you were the practice player of the day, so when I got that, I was happy just knowing all the hard work that I put in really is paying off.”

So far there have been people-pleasers like Van Ginkel, players who simply want everyone to be happy with their music choices so they put something in for everyone.

Then there are those who want the music to reflect the region of the country they are from, or the genre of music they are into.

Quarterback Tua Tagovailoa, the orange jersey player on Wednesday, had that day’s practice feeling like the Dolphins had just relocated to the lobby of a Hawaiian resort, taking the tunes back to his childhood home.

Safety Jevon Holland’s music had a heavy West Coast flavor, as he paid tribute to his Oakland roots. And receiver Jaylen Waddle’s Houston upbringing was reflected on his orange jersey day.

Then there’s defensive tackle Christian Wilkins, who controlled the playlist on Saturday and gave the fans in attendance some dancing to accompany his musical taste, which was highlighted by his 2 Live Crew, Bobby Brown and Teddy Riley selections.

“I got to show my range,” said Wilkins, who used his first song of practice, Jay-Z’s “Public Service Announcement,” as a tribute to fellow defensive lineman John Jenkins, a 10-year veteran whom he stressed has “been having a heck of a camp.”

“It’s a lot of pressure because you have to set the tone for the day,” Wilkins said about the playlist power. “But you also have to be yourself a little bit. Guys are always hitting up other guys [for recommendations].

“I’m a man of the people, so I have to give the people what they want.”

What the players want is music that will inject energy into these dog days of summer practices in 100-degree heat. But the team’s standards are high.

“The whole point is, if you …read more

With a trade deadline that saw the Orioles lose two significant contributors complete, executive vice president and general manager Mike Elias left Baltimore for Texas, first to deliver a message to the team and then to the public. He met with “a number of core players” — including Ryan Mountcastle, Cedric Mullins and Austin Hays— […]

The Ravens have signed kicker Justin Tucker to a four-year extension, the team announced Monday. Tucker’s new deal comes after an impressive 2021 season, during which he had the league’s best field goal percentage (95.6%) and PAT percentage (100%). Tucker converted two game-winning field goals, including an NFL-record 66-yarder in a victory over the Detroit […]

COMMERCE CITY — The Colorado Rapids’ offense broke out of its shell Saturday night at Dick’s Sporting Goods Park. Colorado put three past Minnesota United before lightning paused the match at halftime. By the final whistle, the Rapids tacked on one more in a 4-3 victory that secured a much-needed six-point week. Gyasi Zardes scored the […]