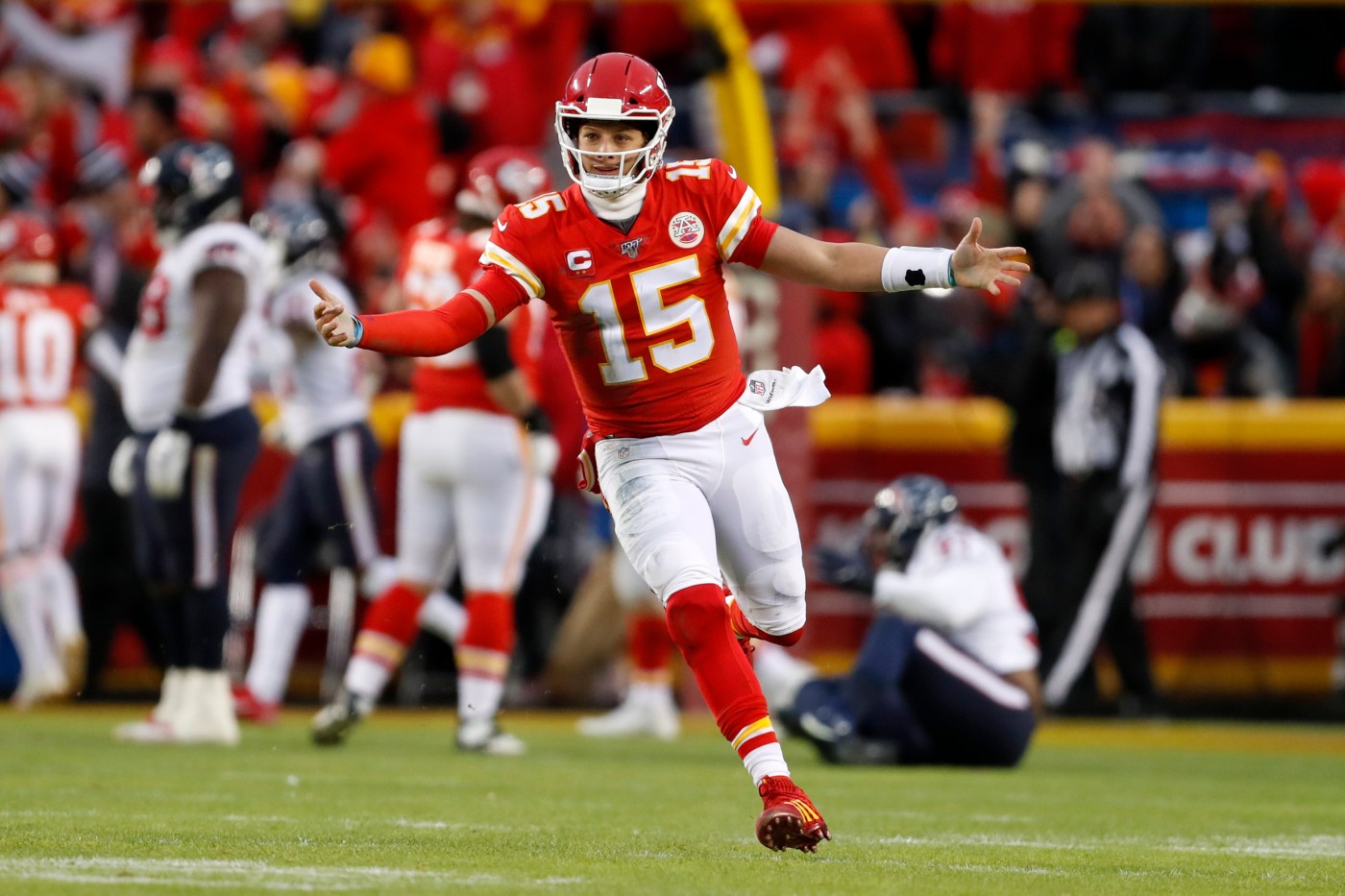 The Kansas City Chiefs spotted the Houston Texans 24 points and still waltzed into the AFC championship game with a historic comeback on Sunday.

Quarterback Patrick Mahomes threw five touchdown passes and rallied the Chiefs to a wild 51-31 victory and a matchup next weekend against the Tennessee Titans for a chance to advance to the Super Bowl.

According to Elias Sports Bureau research, the Chiefs are the first team in NFL history (regular season or playoffs) to lead at halftime after trailing by at least 24 points.

The Chiefs answered the Texans’ first-quarter blitz with 28 straight points in the second quarter to take the lead at halftime. They never trailed again.

The Texans and Chiefs set a postseason record for combined points in the first half.

The 52 points eclipsed the 49 set by the New Orleans Saints and Arizona Cardinals in the divisional round on Jan. 16, 2010. It fell just short of 56 points for any half, set by the Cardinals and Green Bay Packers in the wild-card round a week earlier.

The Texans missed a chance to make it 28-27 when Ka’imi Fairbairn missed a 51-yard field-goal attempt on the final play of the half.

The Chiefs fumbled a punt return, had their own punt blocked for a score and committed plenty more mistakes in becoming just the fourth home team in NFL history to trail 21-0 after the first quarter. But the Texans called a fake punt in the second quarter and were just as sloppy in allowing Kansas City to mount the biggest comeback in team history.

Mahomes threw three touchdown passes to Travis Kelce in the second quarter, and his four total TD throws matched the playoff record set by Washington’s Doug Williams in the Super Bowl in January 1988.

Kelce became the first pass-catcher with three touchdowns receiving in a single quarter in postseason history, while the tight end became one of 16 players with three TDs total. Nobody has had four TD catches in a playoff game.

The Chiefs had the ball a mere 4 minutes, 50 seconds in the second quarter. They needed just 16 plays to score four TDs.

Please check back for more on this developing story.

Kiszla vs. O’Halloran: Can anybody beat out Nathan MacKinnon for the Hart Trophy?

Kiz: We are smart sports fans in Colorado, yes we are. And Denver is a great hockey town, yes it is. So, of course, we know: Avalanche star Nathan MacKinnon is the best hockey player on the planet. This is the year he definitely wins the Hart Memorial Trophy as the most valuable player of […]

Click here if you are having trouble viewing the slideshow on a mobile device. AP – Matthew Cabe QIDDIYA, Saudi Arabia — When the history of off-road motorcycle racing is written, an entire chapter will likely need to be devoted to Ricky Brabec. On Friday, the Hesperia, Calif., resident, 28, secured his spot in the […]

There’s one major problem with big talk about the Avalanche being a serious championship contender. At this point, Colorado doesn’t have a legit No. 1 goaltender, much less a net-minder who can lift a team to the Stanley Cup. Avs coach Jared Bednar has cracked open the Pandora’s box of a goaltending controversy, strongly suggesting […]