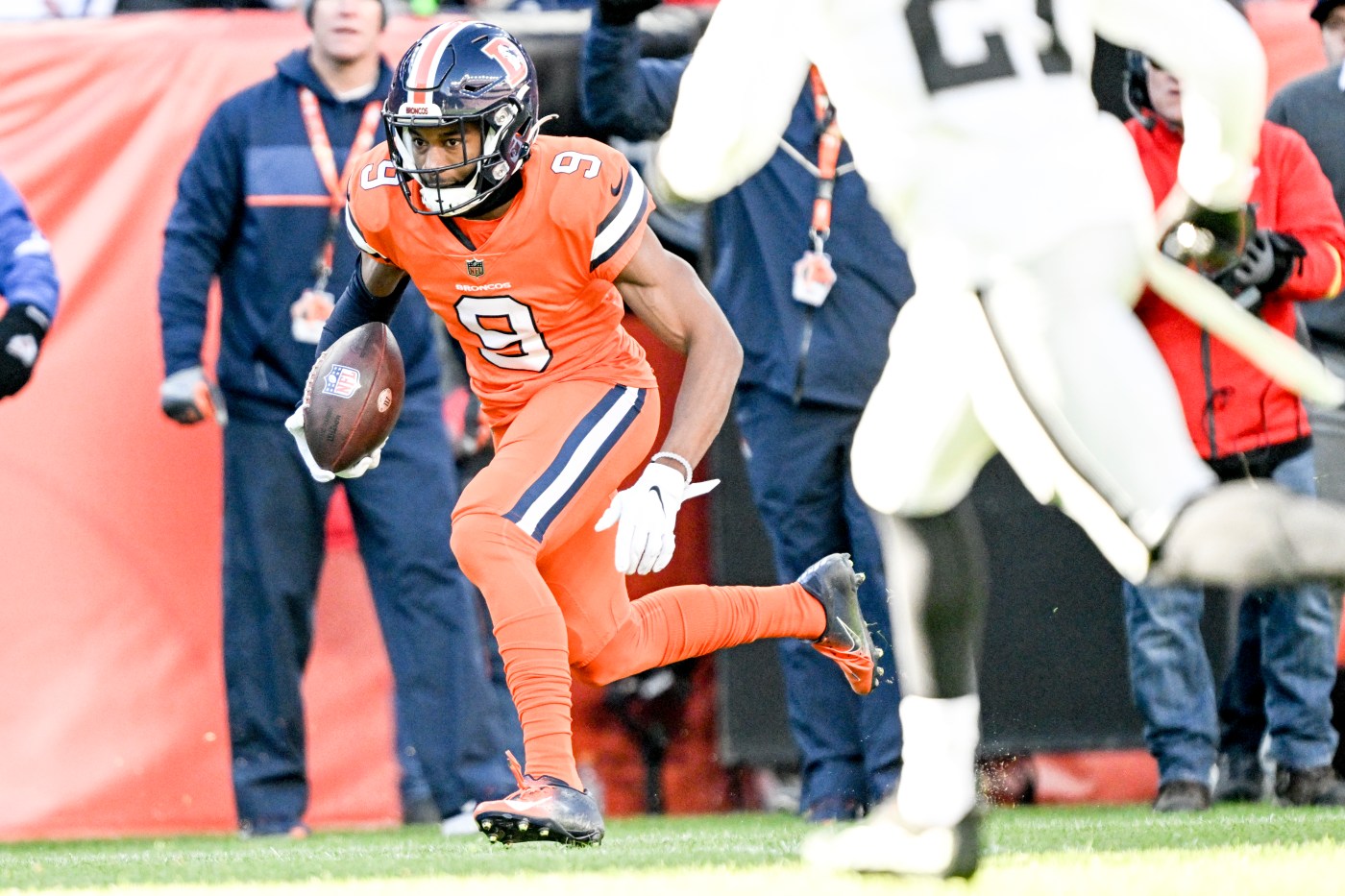 Eleven things about the Broncos as they travel to Carolina to take on the Panthers on Sunday.

1. Broncos wide receiver Kendall Hinton started the season on the team’s practice squad and wasn’t signed to the 53-man roster until Oct. 10. Even still, he’s played the third-most snaps among Broncos receivers and has been essentially the team’s No. 2 receiver for the past two games without Jerry Jeudy. He stepped into Jeudy’s place on the first snap against Tennessee and played that spot without any practice reps there. He’s been on the field for 135 of 144 snaps the past two games and has seven catches for 119 yards over that span. He perhaps should have had two touchdowns – one on a 32-yard catch that was ruled a score and then overturned, and then his lone lowlight of the day, a drop on what was nearly a long touchdown on a free play in the third quarter.

2. “He’s been dynamic out there,” Hackett said. “He’s been able to win on one-on-one routes. He’s got a lot of shiftiness to him. Then when you add his intelligence in there, because of his experience as a quarterback, he’s been really good for us.”

3. Hinton played quarterback in a game in 2020 and at one point was relegated to lining up as a cornerback on scout team. “Last year they had me at nickel for a week,” the former Wake Forest standout said with a laugh. “I guess I’ve touched a little bit of everything.”

4. That can give a third-year player perspective quickly. “During the season, bullets are flying and it’s a lot going on, but there are definitely moments where I sit back and and I’m just grateful for how far I’ve come, the opportunities I’ve got and just where I’m at. The journey.”

5. The team’s top wideout, Cortland Sutton, has seen something of a resurgence in the past two weeks. Since Denver’s bye week, Sutton has 11 catches on 18 targets for 144 yards. In the three weeks before that, the fifth-year player had just six catches on 16 targets. He’s doing that work despite the fact that Denver is playing without receivers Jerry Jeudy (ankle) and KJ Hamler (hamstring).

6. “(Defenses are) challenging our room to go out and make plays,” Sutton said. “We have a lot of young guys who haven’t quite proven themselves yet in the league. We know what they can go out there and do, and it’s on them to go out there and make some plays so that the defenses can play us honestly.”

7. Quarterback Russell Wilson said Wednesday that he’s cognizant of the fact that the Broncos have to be much better in the third quarter over the remainder of the season. The Denver offense has scored just 10 total third-quarter points this year and three of them came after a three-and-out despite good field position following an interception. Overall, they’ve scored four touchdowns in the first, second and fourth quarters each and just the …read more

Until Sunday, it was a relatively simple exercise to pick out the Miami Heat’s best road victory of the season. There was the Oct. 26 victory over the Portland Trail Blazers, in the Heat’s road opener – and that was it. Sunday night, what had been a road to ruin turned into a 106-98 victory […]

Mitchell Robinson denied he was complaining about his limited offensive role. And on Wednesday night, he played that role to absolute perfection. Just ask Mike Budenholzer. “That was one of the more impressive efforts I’ve seen from an individual on the offensive boards. He was relentless,” the Bucks coach said after his team squeaked by […]

Mark Canha elated Buck Showalter won NL Manager of the Year: ‘I was so happy for Buck’

Baseball managers in most markets don’t usually enjoy the same spotlight that managers in New York City do. Their personalities are rarely seen and there is fairly little insight into their relationships with players. But that’s not necessarily the case in New York, where managers are under a microscope. The pressure isn’t for everyone but […]