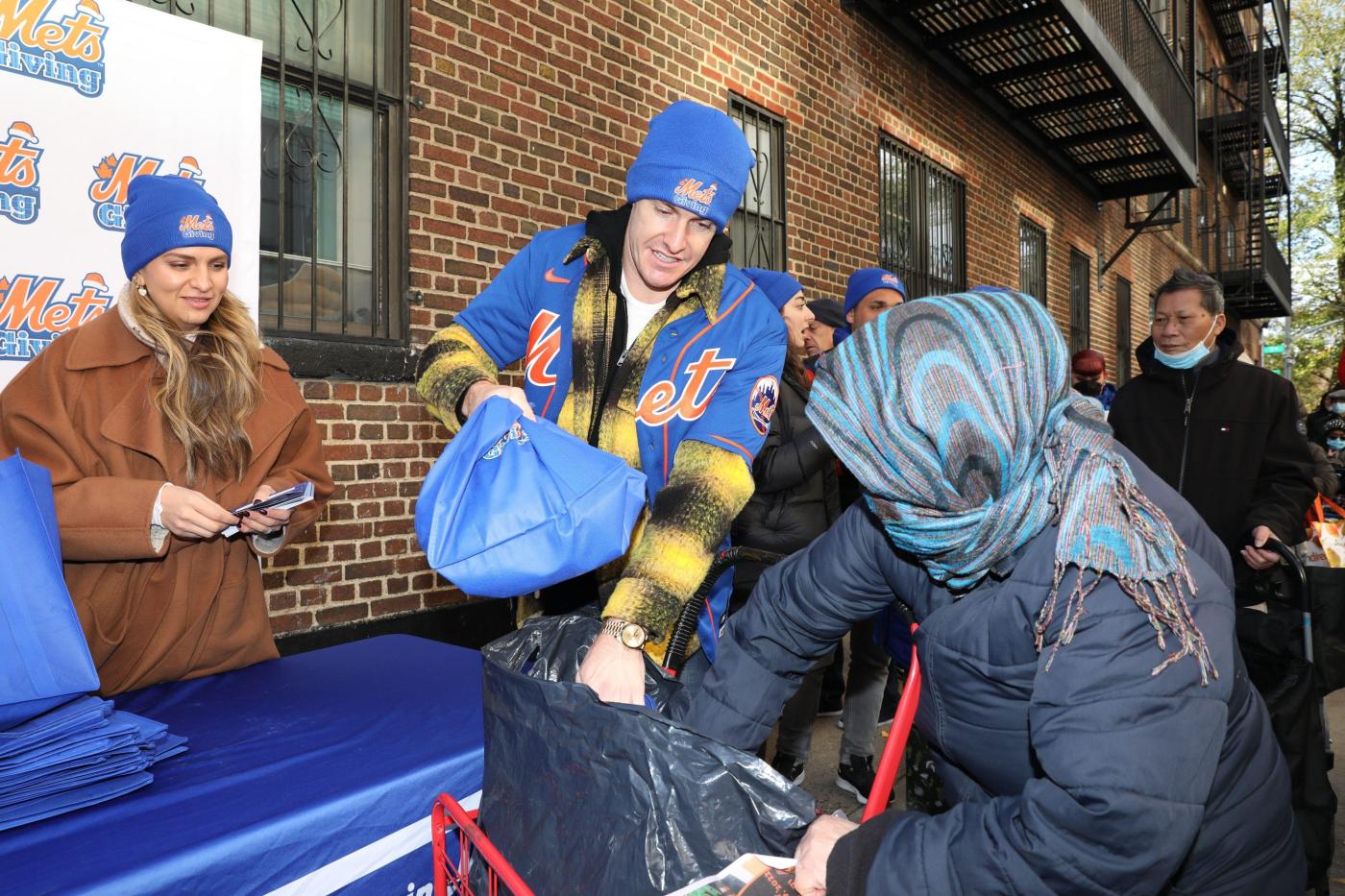 Mark Canha and his wife Marci participated in the Mets’ turkey giveaway at the Common Pantry in Manhattan, one of five locations where the Amazin’ Mets Foundation handed out 5,500 turkeys at food banks across the boroughs.

“These people here are really appreciative to get this food and I’m a big food person, I appreciate a good meal as much as the next person,” Canha said. “So it means a lot.”

Canha, who uses Instagram to post photos of his favorite meals using the handle @BigLeagueFoodie, started his day as part of a judging panel on ABC’s “Good Morning America,” judging the show’s United States of Pie competition. The outfielder saw it as a great way to kick off the holiday season.

But Canha has been closely watching the other season we’re in the midst of — the hot stove season. Many of his former Mets teammates are set to depart in free agency and the club has several holes to fill. Like everyone else, Canha is hoping to see outfielder Brandon Nimmo and ace Jacob deGrom return to Queens.

“He’s a phenomenal talent,” Canha said of Nimmo. “I really appreciate him as a teammate and a person. He’s a great center fielder, a great leadoff guy and I wish the best for him but selfishly, I want him back.”

The Mets have only two starting pitchers under contract for next season in Max Scherzer and Carlos Carrasco. DeGrom’s services are expected to be in high demand around the league despite the price tag attached to the right-hander, but the Mets intend to make him a competitive offer.

“It would be great,” Canha said. “You love to have a guy like Jake in the rotation. I have no idea what’s going to happen with that but I hope we get him. It would mean a lot.”

The 2022 season was Canha’s first in New York. The San Jose native had spent his entire career from little league into the pros in the San Francisco Bay Area, playing collegiately at Cal and spending the first seven years of his Major League career with the Oakland A’s after the club traded for him in December 2014.

Canha’s own contract situation is settled with one more year on his deal, but he’ll be monitoring the hot stove all winter to see who he’ll be playing with next season.

“I’d be lying if I said I don’t pay close attention to it,” Canha said. “You’re always checking to see who we’re going to get or what’s going to happen today. It’s a very exciting time.”

After a week on the road, after an overnight flight, the Miami Heat found themselves Monday night where they seemingly have stood all season – in a tight game destined to go to the wire. This, though, was different, this was the Heat trying to avoid their first 0-4 trip in the Erik Spoelstra era, […]

Dolphins (7-3) vs. Texans (1-8-1), Sunday, 1 p.m., CBS Latest line: Dolphins are favored by 12 points. Dave Hyde, Sports Columnist (Season record: 7-3): Dolphins 38, Texans 17 This is the easiest game on the schedule for the surging Dolphins. Even given the any-given-Sunday parameters, it would take something singularly odd for a Houston team […]

When Terrell Buckley took over as coach of the Orlando Guardians, he promised plenty of familiar faces for fans to cheer on during the team’s first season in the revamped XFL. Buckley and his coaching staff drafted a roster with several players who spent their college careers in the Sunshine State. The Guardians selected former […]