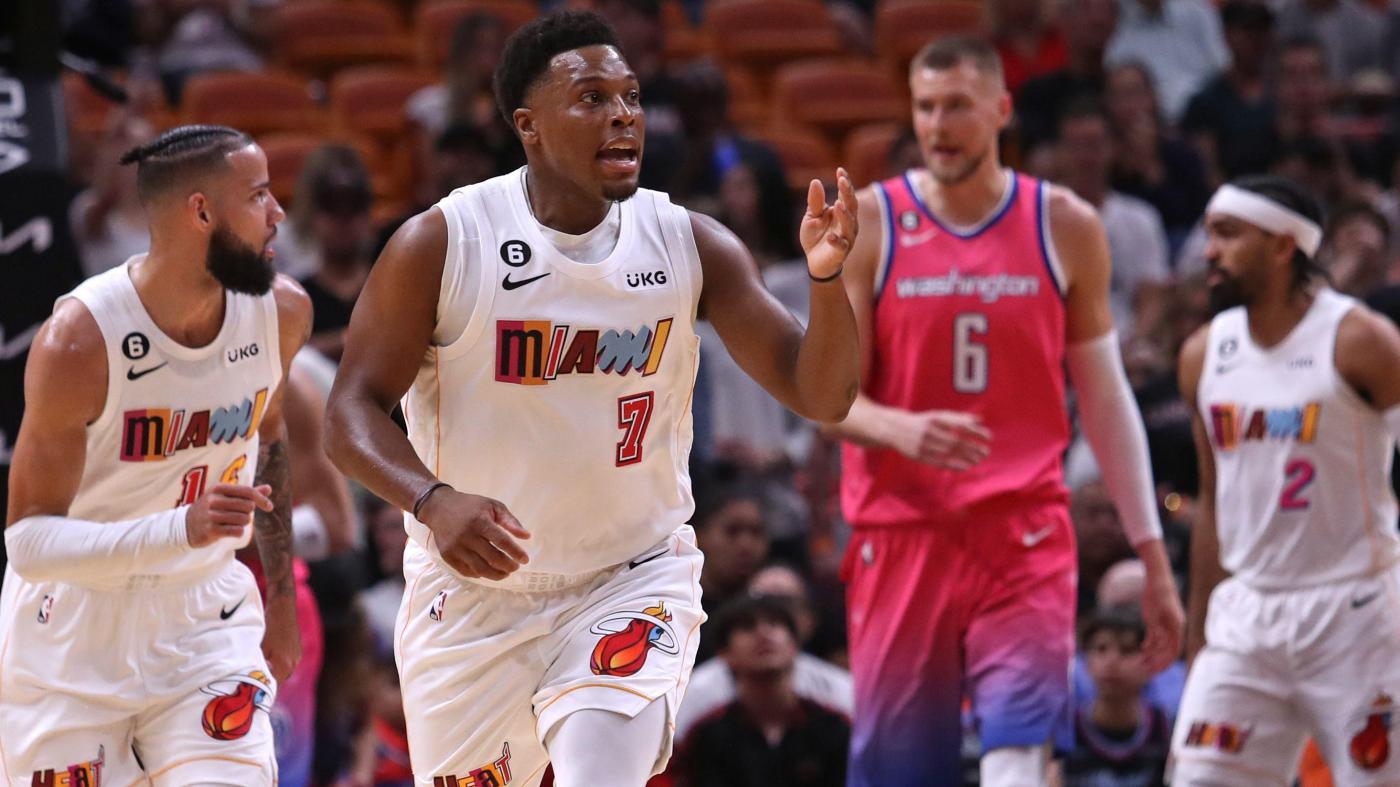 Even with all the moving pieces, with Tyler Herro back and Max Strus now out, there remained a pair of constants Wednesday night for the Miami Heat — no lead is safe and almost every game is harrowing.

This time it was a 21-point advantage early in the third period, and then another wild scramble to the finish, which seemingly has been the story of this young season.

This time, though, the Heat found a way, holding off the visiting Washington Wizards for a 113-105 victory.

With Jimmy Butler, Duncan Robinson and Strus out for the Heat, and with Bradley Beal, Rui Hachimura and Monte Morris out for the Wizards, there was an air of desperation each way.

But for the Heat, it was a desperation that came attached to a four-game losing streak.

This time, with Kyle Lowry keeping the Heat float early and Herro providing a late spark, the Heat held on.

Lowry led the Heat with 28 points, with center Bam Adebayo adding a 15-point, 11-rebound double-double. The Heat also got 24 points from Caleb Martin and 17 from Herro, including a pair of late 3-pointers.

1. Closing time: The Heat led 28-26 after the first period and 60-43 at halftime, matching their largest lead to that stage.

The Heat then went up 21 early in the third period, only to see the Wizards rally within 84-80 at the end of the quarter, allowing 37 Washington points in the quarter. Lowry had one basket in the third, Adebayo none.

Eventually, with the Heat’s lead at 109-105 with 1:16 to play, Heat coach Erik Spoelstra issued a challenge on a foul on Adebayo.

Spoelstra was proven correct, moving to 6-0 on such coach’s challenges, with the Heat regaining possession.

A Martin second-chance layup followed for a 111-105 Heat lead, with the Heat holding on from there.

2. Lowry’s wild ride: Having entered the night second in the NBA in minutes, Lowry again played as a leading man as long as allowed by his foul trouble, starting with 14 first-quarter points.

He kept going from there, moving to 5 of 5 on 3-pointers by the midpoint of the second period, to punctuate a 17-3 Heat run, before missing his sixth attempt from beyond the arc.

Lowry’s 24 points at the intermission were a career high for a first half and matched his previous high for a game this season.

But there then were dual moments of concern when …read more

Knicks spoil opportunity to steal game against the Bucks, lose 109-103 at MSG

The Knicks had them on the ropes. It was an unexpected turn of events at MSG since the opponent, the Bucks, are the elite of the Eastern Conference and a legitimate title contender. But the scrappy Knicks had the edge late Wednesday with Giannis Antetokounmpo fouled out and multiple opportunities to take the lead. But […]

Kevin Durant hears MVP chants as he powers Nets above .500

It felt like a game the Nets should have won handily — probably because the last time they played the Wizards, they set a new scoring record at Capital One Arena. Kevin Durant got hot early and Joe Harris broke free from his recent cold streak. The game felt like Brooklyn’s for the taking. Rarely, […]

Ravens film study: Why Greg Roman’s offense needs to be ‘faster’ before the snap

If anything has summed up the Ravens’ slow-going, late-snapping, barely-beating-the-play-clock offense this season, it might not be the delay-of-game penalty they took in the first quarter Sunday. It might be what came immediately afterward. After watching a flag turn second-and-goal at the Jaguars’ 10-yard line into second-and-goal at Jacksonville’s 15, the Ravens broke their huddle […]