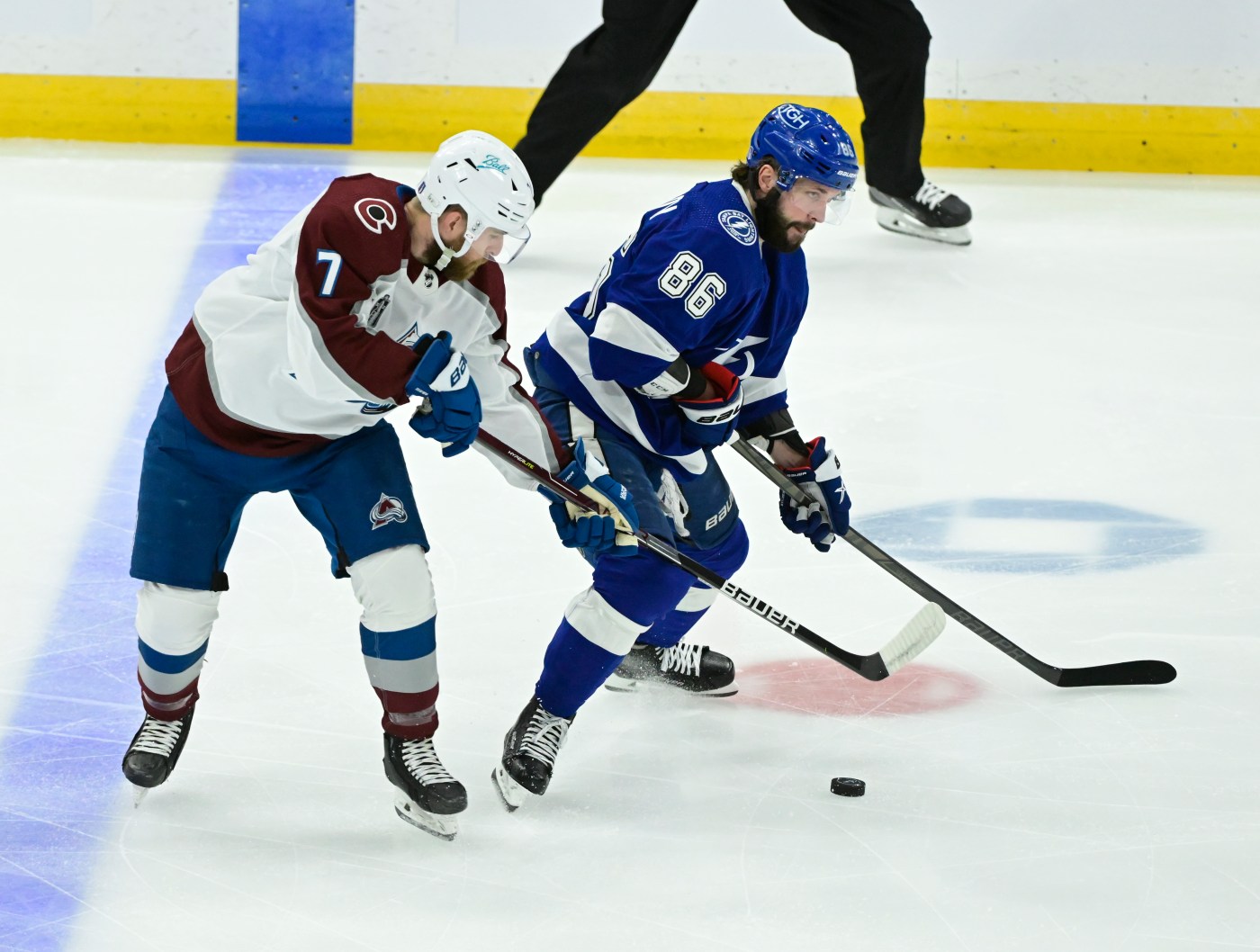 If Devon Toews is dangerous, Corey Perry is malignant.

“It’s one of those plays you don’t want to see,” Lightning defenseman Victor Hedman said of the hit by Toews, an Avalanche d-man, on Nikita Kucherov, a Tampa Bay forward, at the end of a 6-2 Bolts laugher in Game 3, setting up a critical Game 4 Stanley Cup Final showdown Wednesday at Amalie Arena.

If Toews is dangerous, Kucherov is malevolent.

Or is it kosher to skate at a guy’s back, full-tilt, and to then blindside him squarely between the numbers in a fashion that sends him straight into the boards?

Is it cool to ram your right shoulder, at game speed, into the guy’s neck in order to ensure he gets a face full of glass, like a bug on a windshield, the way Kucherov did to Avs defenseman Josh Manson?

The sort of collision that should have drawn a penalty — and didn’t — a few minutes before the hit that got Hedman and Tampa coach Jon Cooper so darn worked up?

“When you get asked questions like that,” Cooper said of the contact between Toews and Kucherov along the boards that forced the latter out of action, raising doubts about Kucherov’s status for Wednesday night. “You’re looking for an answer that everybody in the building already knows.”

A thief knows a thief as a wolf knows a wolf.

We all saw Kucherov and Manson, too. We all saw Perry and Compher last weekend. Pot, meet kettle.

They’re the neighbor who complains to the HOA about your mailbox while leaving his Christmas decorations up ‘til Valentine’s Day.

They’re the co-worker who wags a finger about your diet while he’s stuffing his face with Heath bars.

They’re the sister who warns that your kids watch too much TV while your nephews stare, like a row of transfixed, cherubic zombies, into their respective iPads.

“We’re playing the best team (in the league), they’ve won (titles) back to back,” Avs center Nathan MacKinnon told reporters. “We know they were too proud to go away.”

Too shrewd. Too wily. But the Lightning admonishing anybody else, let alone Devon Toews, about fair play and sportsmanship is like listening to Yosemite Sam lecture on anger management.

The Miami Heat took a rare international turn at Thursday night’s NBA draft with the selection of Serbian forward Nikola Jovic at No. 27. The move to the 6-foot-10 outside-shooting forward came as somewhat of a surprise, with collegiate prospects such as Ohio State forward E.J. Liddell, Kentucky guard TyTy Washington and Tennessee guard Kennedy […]

Before the college basketball season even ended, three names have been considered the three prospects expected to draw consideration for the NBA draft’s No. 1 pick: Former Gonzaga big man Chet Holmgren, Auburn forward Jabari Smith Jr. and Duke forward Paolo Banchero. But since the Magic won the draft lottery and the rights to the […]

Avalanche smart to be aggressive in shot selection, despite Tampa Bay’s high amount of blocked attempts

The shock of blowing a two-goal lead overcome and its game re-discovered, the Avalanche were pressing Tampa Bay with less than nine minutes remaining in regulation Wednesday night. Looking to break a 3-all tie, the Avs’ top line buzzed in the Lightning zone. They controlled possession. They delivered multiple precision passes. They won two races […]