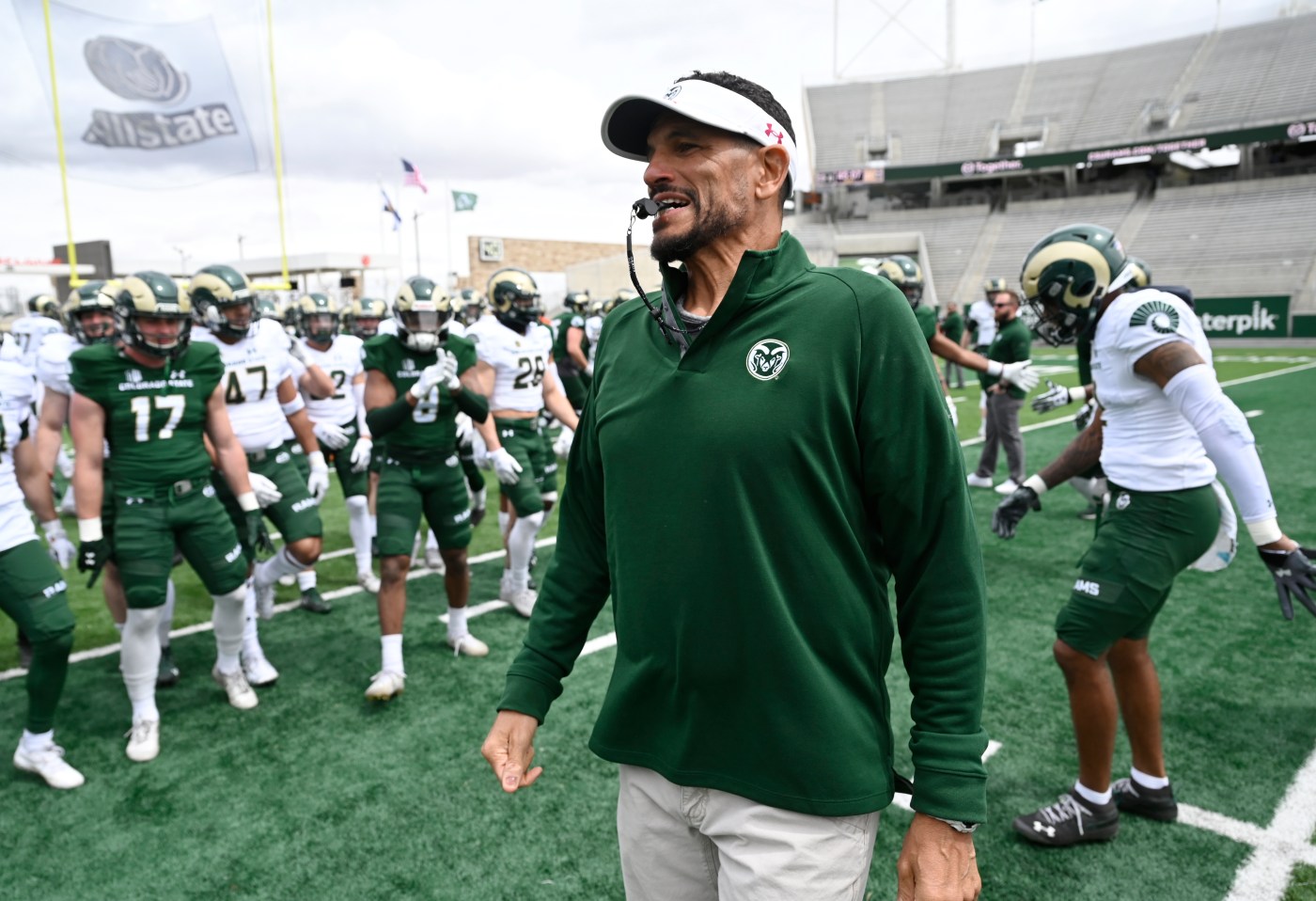 FORT COLLINS — Lordy, you shoulda seen the smiles. The world is sleeping on the CSU Rams, and they know it.

“I was giggling,” new football coach Jay Norvell said Friday as Day 1 of preseason camp wrapped just outside Canvas Stadium, “all the way to work today.”

Giggling? Norvell’s predecessor, Steve Addazio, appeared physically incapable of giggling. Or grinning. Or hugging. The Daz had all the empathy of a Burmese python right before it swallows a cow whole.

Friday, though … Friday was different. CSU legend Sonny Lubick dropped by to give pointers and blessings. The “Air Raid” Rams threw the rock all over the yard, free and easy. Of CSU’s 42 juniors, seniors and grad students, 15 of them — 36% — weren’t on the roster at this time a year ago.

“We’ve added some new kids that are fun to work with,” Norvell said. “It’s like Christmas, you know, when you get new toys. I told one of our quarterbacks, ‘You got some new toys out here, let’s make sure you use them.’”

One of the shiniest is junior wideout Tory Horton, a 6-foot-2 speedster from Fresno who already owns Canvas Stadium before he’s taken a regular-season snap in green and gold.

In Horton’s last regular season game, he dropped 113 receiving yards and two scores on the Rams as a member of Norvell’s Nevada Wolf Pack last November, ripping open a flesh wound that would end The Addazio Era with a 52-10 loss.

Some context: Those two receiving scores at Canvas would’ve been the most — again, we’re talking about two TDs — among Rams wideouts in that building in 2021. It would’ve tied him for the most by any CSU offensive player a year ago — tailback David Bailey also notched two TD receptions, but over two different home games.

And those 113 yards through the air? That would’ve been more than any single Rams wide receiver tallied all of last year at Canvas, by a margin of 10 yards over speedy Dante Wright (103 vs. South Dakota State).

In hindsight, that says more than a little something about the Rams’ 2021 passing game, which somehow left the top tight end in the country, Trey McBride, without a single TD catch to his name. And a little more about what Horton, who runs routes for the home side now, brings to the table.

“That just blew my mind,” Horton laughed Friday after he heard about how his one game at Canvas looked vs. CSU’s entire season. “Just knowing where I was at last year and just how I compare with some of the best that came in and out of this building.

“When we drove in (to the game), I was like, ‘This is a nice facility, you know?’ It’s a beautiful facility. I loved the stadum, the light show, everything was just great.”

Horton’s kept it up since following Norvell from Reno, pulling in one ball during spring practice for a touchdown over three defenders off a back-foot heave from quarterback Clay Millen. …read more

Vin Scully, iconic Dodgers broadcaster who grew up in NYC and attended Fordham, dead at 94

Vin Scully, the radio and TV icon who called Dodgers games from broadcast booths in Brooklyn and Los Angeles, died on Tuesday at age 94. Scully started calling games for the Brooklyn Dodgers in 1950, not long after he graduated from Fordham, where he helped start the student-run radio station, WFUV. When the Dodgers left […]

WASHINGTON, D.C. — If this was Juan Soto’s last game as a Washington National, it ended like most of his other 2022 games have: with a loss. The Mets beat Soto and the Nats 7-3 on Monday night, giving the Mets seven straight wins and the Nationals nothing more than an uncertain future. Twisting the […]

The planned pay-per-view fight between Baltimore’s Hasim Rahman Jr. and social media star Jake Paul is off because of an issue with Rahman’s weight, Showtime Sports announced Saturday evening. The fight, scheduled for Aug. 6 at New York’s Madison Square Garden, was originally to be fought at a 200-pound limit; Rahman has spent his entire […]