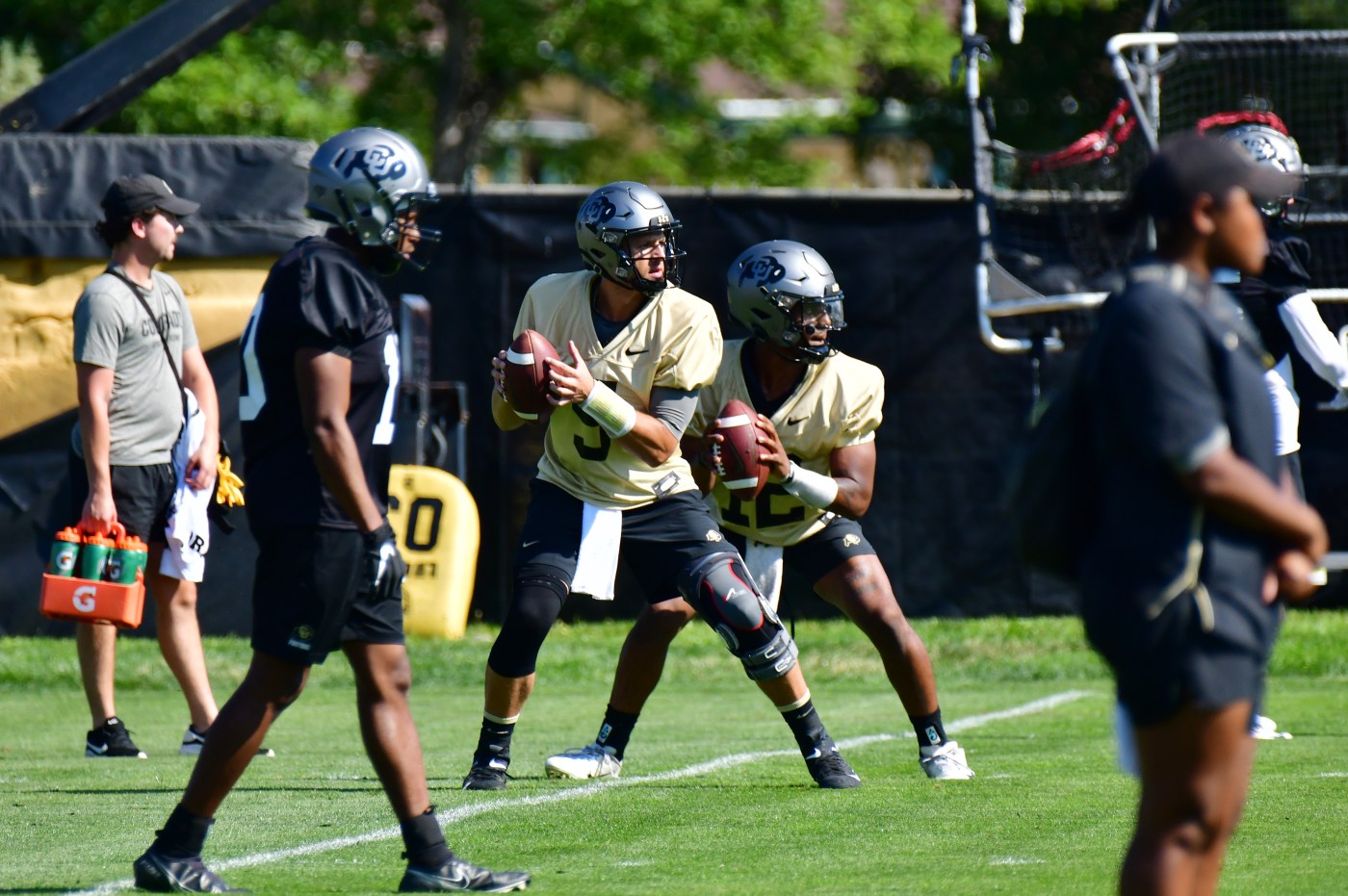 BOULDER — Karl Dorrell bounced to the interview tent Tuesday the way a little kid approaches a state fair midway for the first time, with a smile on his face and a spring in his step.

“Everybody starts with (the mode of) they’re kind of anxious and excited or happy and all that stuff,” the third-year CU Buffs football coach offered at his first preseason camp media scrum. “And then usually by practice 12, it ends up being a different tune, because they’re getting sore and beat up and tired and all that stuff. But these guys, I think, are showing a level of maturity that I haven’t seen since I’ve been here.”

Brendon Lewis used the word “fun” five times over one three-minute stretch. J.T. Shrout, the Tennessee transfer and Lewis’ top competitor for the CU’s No. 1 quarterback slot, snuck up behind the local scribes while Maddox Kopp, another import at signal-caller, was talking. Shrout then held out a fake tape recorder, nodding playfully with fake interest until he elicited a real giggle from his new teammate.

“You come in with a different attitude,” said Shrout, whose first season in black and gold was lost before it even began, thanks to an ACL tear suffered last August that put him on the shelf and put the Buffs offense in a pickle.

“Coach talks about the ‘dog days’ of camp … You get guys (saying), ‘Man, I gotta go do this today?’ It’s kind of an attitude (for me) of, ‘Man, I really get to go do this!’ You know, not taking anything for granted.”

They need him. Criminy, they need somebody.

Against teams that weren’t coached by Ed McCaffrey, the Buffs scored all of 20 points combined last September. If that happens this time around, they’ll be 0-4 right out of the gate. And you can kiss 2022 good-bye before Columbus Day.

Have you seen the dance card? The curtain lifts against TCU, at home, under the lights, on Sept. 2. Not to startle anyone, but the guys running the Horned Frogs’ offense now — new head coach Sonny Dykes and coordinator Garrett Riley — steered SMU to 38.4 points per game last fall, 10th in the country.

At Air Force in Week 2? 30.8 points per game in 2021, thanks to 328.4 yards per tilt on the ground. Zoomies coach Troy Calhoun had his crew running circles, literal and figurative, around Mel Tucker’s defense in Boulder three years ago.

At Minnesota the next week? 25.5 points on 198.1 rushing yards per game. And do we need to remind you what happened last September, the first true “measuring stick” game for the Buffs after UNC and Texas A&M? The Gophers got the stick out and whacked poor Ralphie about the head with it, a game that got so out of hand that poor old Folsom Field started falling apart at the end.

The schedule won’t wait for the next …read more

DL Hall’s development is a delicate balance. For the contending Orioles, it’s just the beginning. | ANALYSIS

One was on the mound making his major league debut, and the other was in the stands at Tropicana Field, soaking in the atmosphere from a scene he hopes to experience soon. It was a short-lived debut for Orioles left-hander DL Hall, who was pulled after 3 2/3 innings and learned he was headed back […]

The Orioles, manager Brandon Hyde said, did not do enough to prevent what this year’s Major League Baseball trade deadline brought them, or rather, what it took from them. They traded a fan favorite for two pitching prospects and an All-Star for four more. Their biggest major league addition, holding that status because he was […]

In the wake of a very active 48 hours leading into the trade deadline, GM Brian Cashman and manager Aaron Boone were talking about all they added to make this a championship-caliber team. In the clubhouse, there was a moment of adjustment and recognition that losing Jordan Montgomery was a hit to the roster, before […]