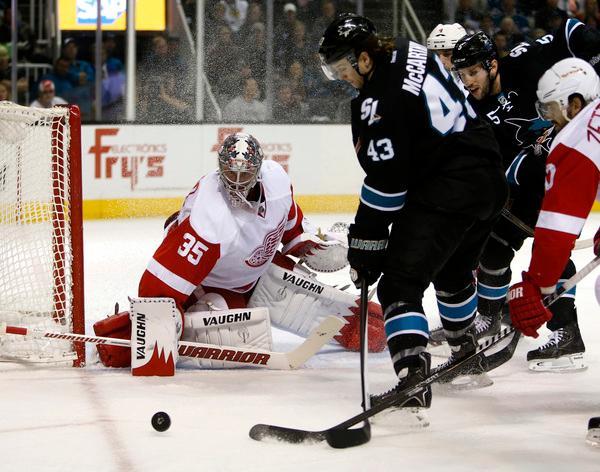 “It is an honor to win the Fred T. Hunt Memorial Award,” said McCarthy, who thanked his teammates and coaches that voted him the award, as well as “the Sharks organization for giving me the opportunity to play the game that I love for as long as I did.”

McCarthy’s playing career — he was a member of the Sharks for part of five seasons from 2009-2016 — McCarthy was the Barracuda’s captain until his career ended with shocking swiftness after he suffered an ischemic stroke in December. He fully recovered but decided to retire as an active player and become an assistant coach working with Sharks’ top prospects.

“It’s not something you can prepare for or see coming so I took some time,” McCarthy 33, said in a release after his stroke. “I spoke to some people whose opinions I value and, although it’s not out of the question that I could return after an extended period of time, I think it’s a good time for me to step away from playing.”

McCarthy had three goals and three assists with the Sharks. He played 577 games in the American Hockey Association, scoring 130 goals and 167 assists. He’s the Barracuda’s all-time leader with 275 games. He was a member of the 2018 United States Olympic men’s hockey team. In college he co-captained Boston University to an NCAA championship in 2009.

Broncos new No. 1 cornerback A.J. Bouye hasn’t lost the chip he had as an undrafted college free agent

In his eighth year in the NFL, A.J. Bouye hasn’t lost the prove-you-wrong mindset he’s had since coming into the league with Houston in 2013 as an undrafted free agent from Central Florida. The Broncos traded with Jacksonville for the cornerback in the offseason, and the 2017 All-Pro selection is hungry to make another statement […]

Hotline newsletter: Pac-12 presidents continue to say, and do, the right things for football

*** The Pac-12 Hotline newsletter is published each Monday-Wednesday-Friday during the college sports season and twice-a-week in the summer. (Sign up here for a free subscription.) This edition, from May 19, has been made available in archived form. Testing: Failure Isn’t An Option Pac-12 presidents and chancellors held their annual spring meeting Monday under most […]

How much revenue would Denver Broncos lose without fans in stands?

The Denver Broncos released a complete schedule for the 2020 season two weeks ago, but it remains to be seen what that will look like amid the coronavirus pandemic. Will all the games go off as scheduled? And if so, will there be fans in the stands? The Miami Dolphins revealed a social distancing plan […]