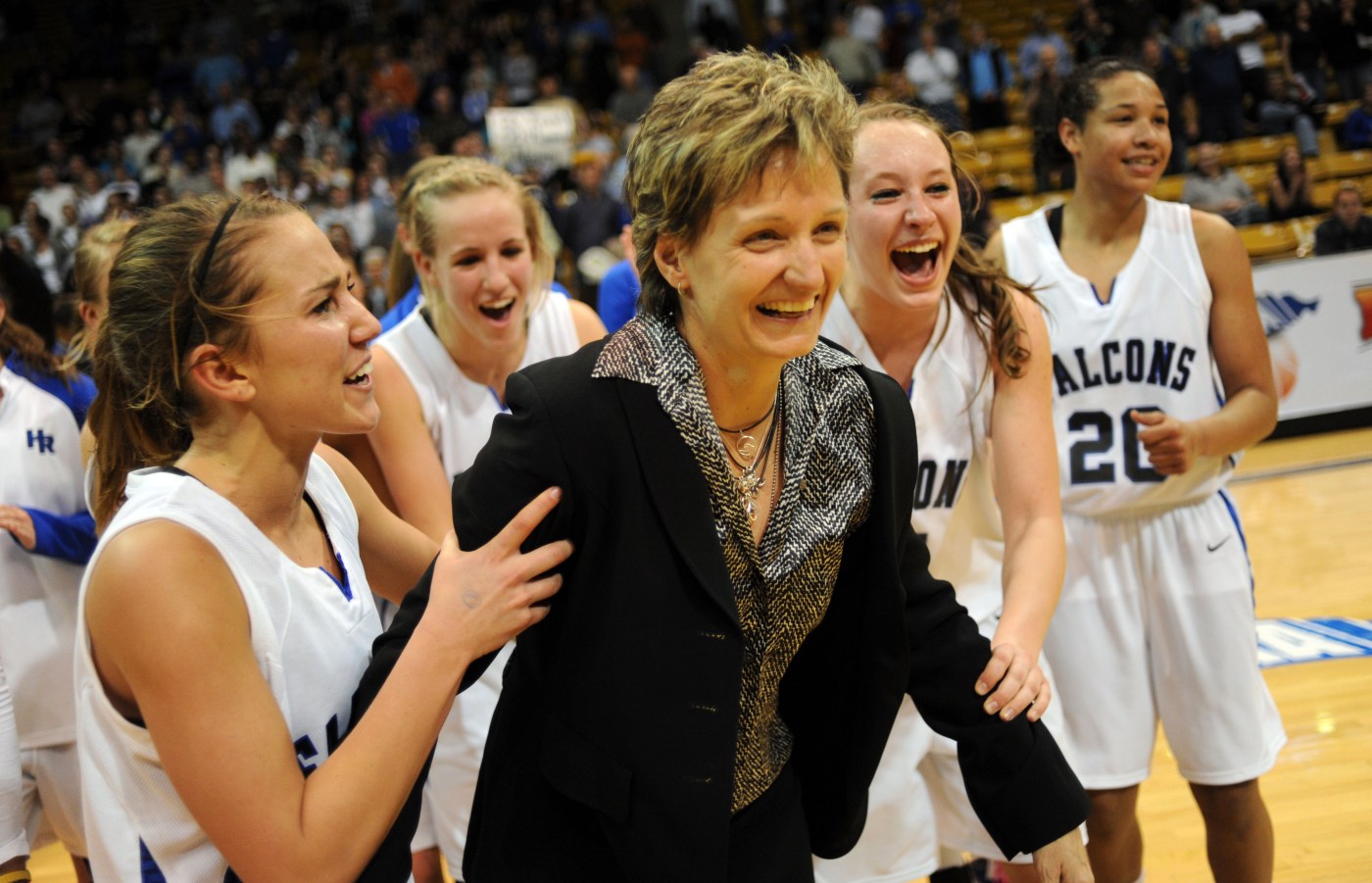 When Caryn Jarocki played in high school in the Chicago area in the late 1970s, less than a decade after the passage of Title IX, she couldn’t help but notice the wide disparity between how girls basketball players were treated compared to the boys.

“With the girls at the start (of Title IX), it was like, ‘You can have the small gym, you can have the late practice, your locker room is that small P.E. room over there,’” Jarocki recalled. “Or you didn’t have (a locker room) at all… At my high school, the guys had a giant fieldhouse, with a really nice weight room and a track. The girls got this little gym on the other side of the school.”

That scene stands in stark contrast to where girls basketball is now, Jarocki said, thanks to the long-term impact of Title IX.

The Highlands Ranch coach, who is 698-183 with seven state championships and 18 Final Four appearances over 37 seasons with the Falcons and Colorado Academy, has been a leader in helping grow the game in numbers, popularity and opportunity.

“I feel like now, the kids don’t have any idea what it used to be like before Title IX and in the early years of Title IX,” Jarocki said.

“… The most rewarding change to me is that girls can actually go to college to play and get a free education playing sports. That has evolved significantly, but as we saw from the NCAA basketball tournaments two years ago — when players were highlighting the weight room and amenities and meals for the girls versus the guys — there’s still some inequities that exist. But it’s still way better than it was.”

Jarocki also believes that had Title IX not passed when it did — in June 1972, four years before she started high school — she wouldn’t have become a basketball lifer.

After starring as a guard at East Leyden High School (Franklin Park, Ill.), Jarocki went on to play at the University of Denver, where a torn ACL her senior year led her into her first coaching job at Colorado Academy in 1982.

“If I wouldn’t have had the opportunity to play myself, I wouldn’t have loved the sport as much as I do, and I don’t think I would’ve gone into coaching,” Jarocki said. “I never thought that I would (have this impact). I hope my legacy is that I helped kids get to the next level to play in college or to enjoy the sport while playing in high school.”

Chicago Bears coach Matt Eberflus doubles down on his demand to players: ‘Get your track shoes ready’

Part of Matt Eberflus’ message to players as they separated for summer break was the same as it was the day he was introduced as the Chicago Bears new coach in January. “Get your track shoes ready,” Eberflus repeated Thursday as minicamp wrapped up at Halas Hall. It was both a warning and a promise. […]

Altitude Sports will be without one key team in its programming starting lineup next season: the Colorado Rapids. On Tuesday, Major League Soccer announced a new, 10-year TV rights deal with Apple and its streaming platform, Apple TV+ starting in 2023 — without local blackouts or restrictions. The Sports Business Journal reported Apple will pay […]

TORONTO —  Anthony Rizzo is willing to take one for the team. Or, the Yankees first baseman will take one for himself actually. Rizzo, who has been hit more times than any other batter in the majors since he arrived in the big leagues, sparked the Yankees big fifth inning by getting plunked. He ended […]