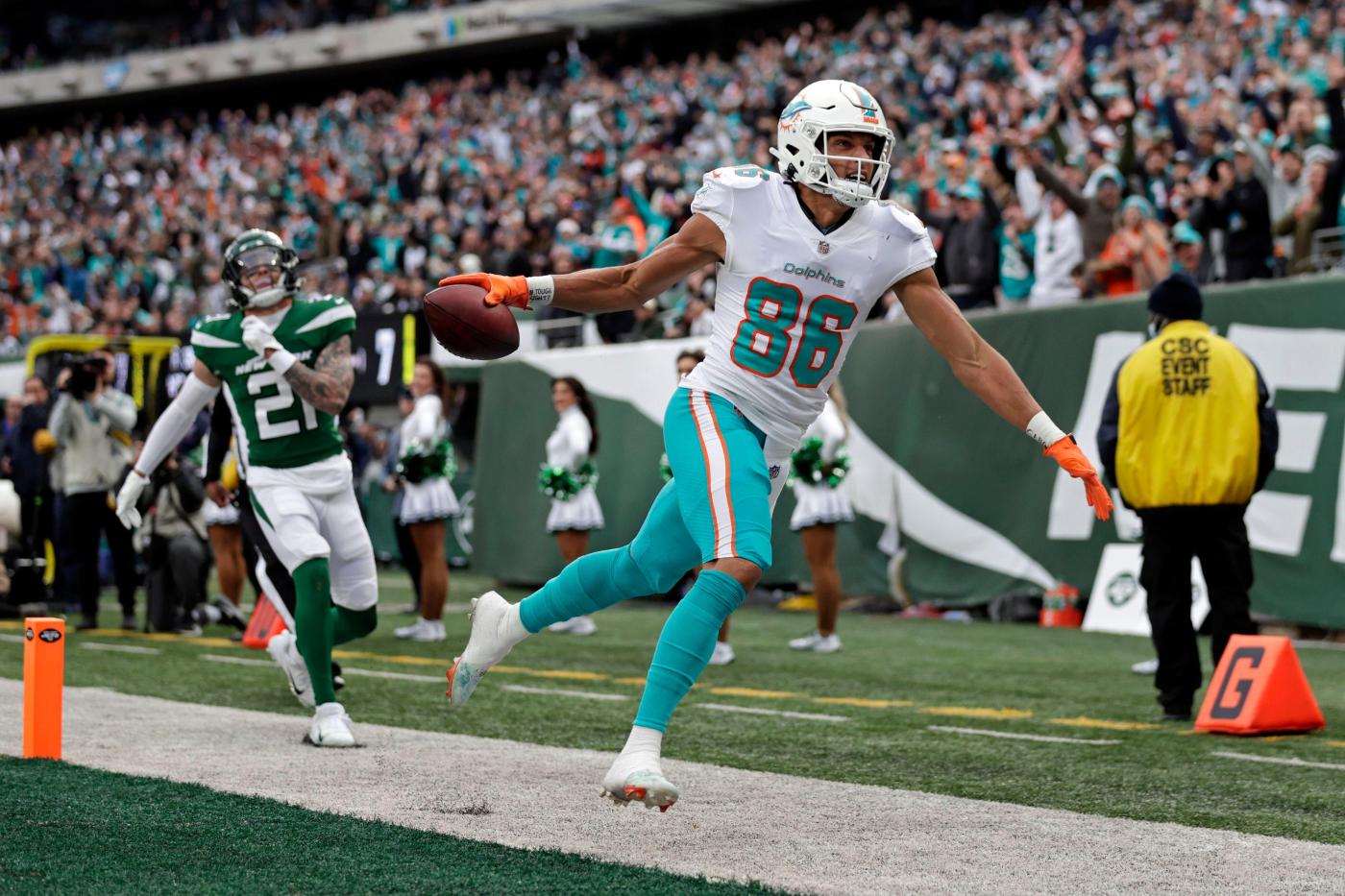 The Miami Dolphins’ offensive execution in the second half on Sunday at the New York Jets was a big reason why they came away with a 24-17 victory after the two teams played a sloppy 7-7 first half.

First, there was the 65-yard touchdown pass from quarterback Tua Tagovailoa to receiver Mack Hollins that opened the half like the Dolphins did the first half — with a touchdown. But maybe more important were the two fourth-quarter scoring drives, one for the go-ahead touchdown and the other to milk the clock late and put Miami up two scores.

The Dolphins’ effectiveness and ability to put together those time-consuming series came behind a commitment to the running game — something that has been on and off but mostly off all season — and Tagovailoa’s passing efficiency.

He was 27-of-33 passing. Meanwhile, the run game may have only averaged 3.5 yards per carry, but it worked late and had to be respected enough to keep the defense honest. The play-action pass and run-pass options were working behind those two factors.

“I think they go hand and hand together,” said co-offensive coordinator Eric Studesville. “When you’re running the ball effectively, that changes the defense’s mentality a little bit and makes them have to obviously honor that and maybe bring another defender down into the box.

“Everything that we do, we try to make sure there is a complement for it — run, pass, play-action, RPO potentially. We’re trying to always match things up to put someone in conflict somewhere on the defense as much as possible.”

The offensive line, after having so many issues throughout the season, did not give up a sack against a Jets’ front that can get to the quarterback. There were some pressures, but Tagovailoa was able to get rid of the ball in those instances and one would-be sack was wiped away by penalty.

“I think that’s a credit to [offensive line coach Lemuel Jeanpierre) and the offensive line group in that they are working continually to offset some of the things that have given us some problems earlier in the year,” Studesville said. “This is one week. We’ve got to keep building on it though. It’s not a finished product by any stretch of the imagination.”

The Dolphins also incorporated a number of trick or gadget plays. There were Wildcat-type plays with either running back Myles Gaskin or receiver Albert Wilson and even Wilson throwing a pretty good ball to the end zone that nearly resulted in a touchdown.

“We have lots of ideas in the room,” Studesville said. “We’re always trying to find what gives us the best chance and when we are looking at the tape and we are studying and we are game-planning things, lots of conversations come up.”

It also helps when the opponent commits penalties on would-be third-down stops. Ahead of the go-ahead touchdown, the Dolphins got a new set of downs by the goal line after roughing the passer was called on Tagovailoa’s third-down incompletion. On …read more

New Dolphins running back Phillip Lindsay had special source of inspiration to get ready to contribute Sunday vs. Panthers

Phillip Lindsay had to leave a crying, bawling son behind on Wednesday night when he got into an Uber that was taking him to the airport. Phillip Theo Lindsay, 1 1/2 years old, was watching his father go from Houston to Miami the night before Thanksgiving after the elder Phillip Lindsay was waived by the […]

Jason Garrett is out as Giants offensive coordinator, fired on Tuesday just 26 games into a disappointingly low-scoring experiment coaching Daniel Jones. Head coach Joe Judge fired Garrett the day after a 30-10 Monday night loss at Tampa Bay because the offense’s inability to score points is costing the Giants (3-7) another season. “I have […]

TORONTO — In Nathan MacKinnon’s eight-game absence, Avalanche second-line center Nazem Kadri has been on an offensive tear, producing 17 points in climbing to fourth in NHL scoring. Kadri has points in 11 of his past 12 games and Colorado is 7-1 since it lost its first-line center to injury. MacKinnon is scheduled to return […]