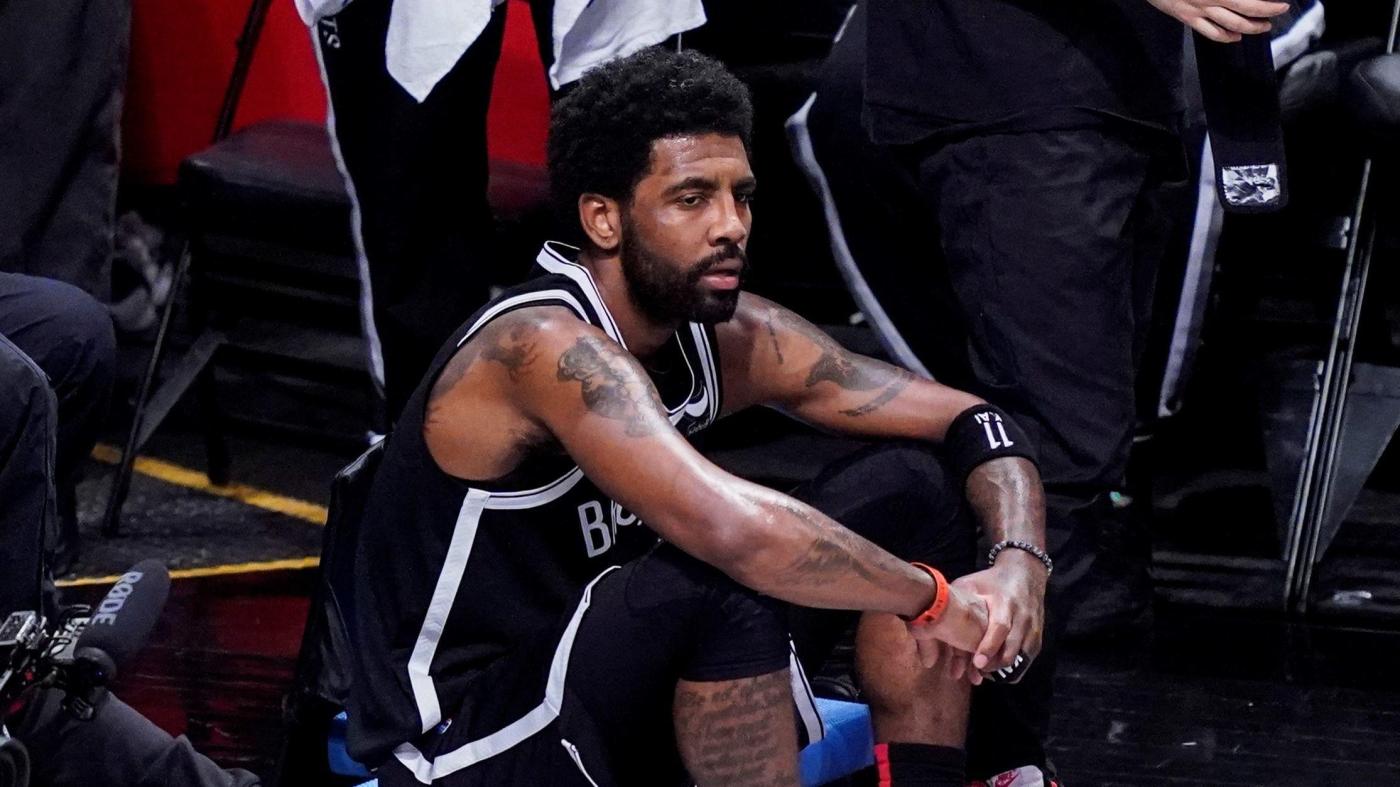 The Miami Heat have been here before, at the intersection of Kyrie Irving and the All-Star guard’s wandering eye for something different.

So after leaving the Cleveland Cavaliers for the Boston Celtics, and then the Celtics for the Brooklyn Nets, Irving now has been linked to several other NBA destinations, including the Heat.

At a contract crossroads that can have him opt out by month’s end on the $36.9 million on the final season of his Nets contract, or return and secure a massive extension, Irving’s saga took a twist ahead of Thursday’s NBA draft.

That is when ESPN’s Adrian Wojnarowski reported, “If Kyrie Irving can’t reach an agreement to stay with Brooklyn, he has a list of teams he’d like them to consider on sign-and-trades, including Lakers, Clippers, Knicks, Heat, Mavs and 76ers. None of those teams have cap space to sign him without Nets’ help.”

In order for the Heat to come within the necessary matching-salary range for Irving, it would require one of Kyle Lowry, Jimmy Butler or Bam Adebayo to be part of such a deal.

A package of Duncan Robinson and Tyler Herro would leave the Heat shy of the needed $27.7 million in outgoing salary, unless several smaller Heat salaries also are included.

Irving has had an uneven run with the Nets, to the degree that The Athletic reported on Thursday that Brooklyn forward Kevin Durant also could be rethinking his time with the Nets.

The Heat had been linked to Irving before he both moved on to the Celtics and the Nets.

During an ESPN appearance in 2017, Butler had mentioned Irving among the NBA players he most would want to play alongside. Those comments came while Butler was a member of the Chicago Bulls.

Butler also was the prime proponent of the Heat adding Lowry last summer.

It has been four years since Chet Kammerer stepped down as the point man for the Heat on the NBA draft. But the influence remained as the team prepared for Thursday night’s selections.

Having added Kammerer’s title to his ongoing role as Heat assistant general manager, Adam Simon said the Kammerer model continues as part of the team’s process.

“He’s had a tremendous impact on what we do here and how I do things,” Simon said, with Kammerer, now a senior advisor, among those in the team’s draft room on Thursday night at FTX Arena.

While Kammerer had a reputation of identifying draft prospects that others overlooked, Simon said he works to his own strengths.

“I can’t do some of the things that Chet does,” Simon said. “My job is actually different. I spend a lot of time doing things with my strengths, with working with agents and dealing with other people.

“But Chet had such a great attention to detail and I think that has certainly rubbed off on all of us that had worked under him and with him these years. Just the way he approached projects and assignments. Very creative mind …read more

Q: Ira, I think we can all agree that Tyler Herro is not going to ever be a lockdown defender. Yes, he needs to improve, but for Herro to really break into elite level he needs to be unstoppable on most nights. He was not especially in the last third of the season this year […]

Byron Pringle knows he didn’t make the right type of headlines in his first couple of months as a Chicago Bears wide receiver. He was arrested in April in Florida for reckless driving and driving while his license was suspended after an officer suspected him of doing a donut on the road with a child […]

Austin Hays becomes the sixth Orioles player to hit for the cycle, doing so in six innings in 7-0 win over Nationals

The rain picked up its intensity again as Austin Hays stepped to the plate in the sixth inning, as if the sprinkler system in the sky could tell the Orioles outfielder was on fire. Even that water suppression system couldn’t stifle Hays, who promptly lashed the last remaining item on his checklist into left-center field. […]