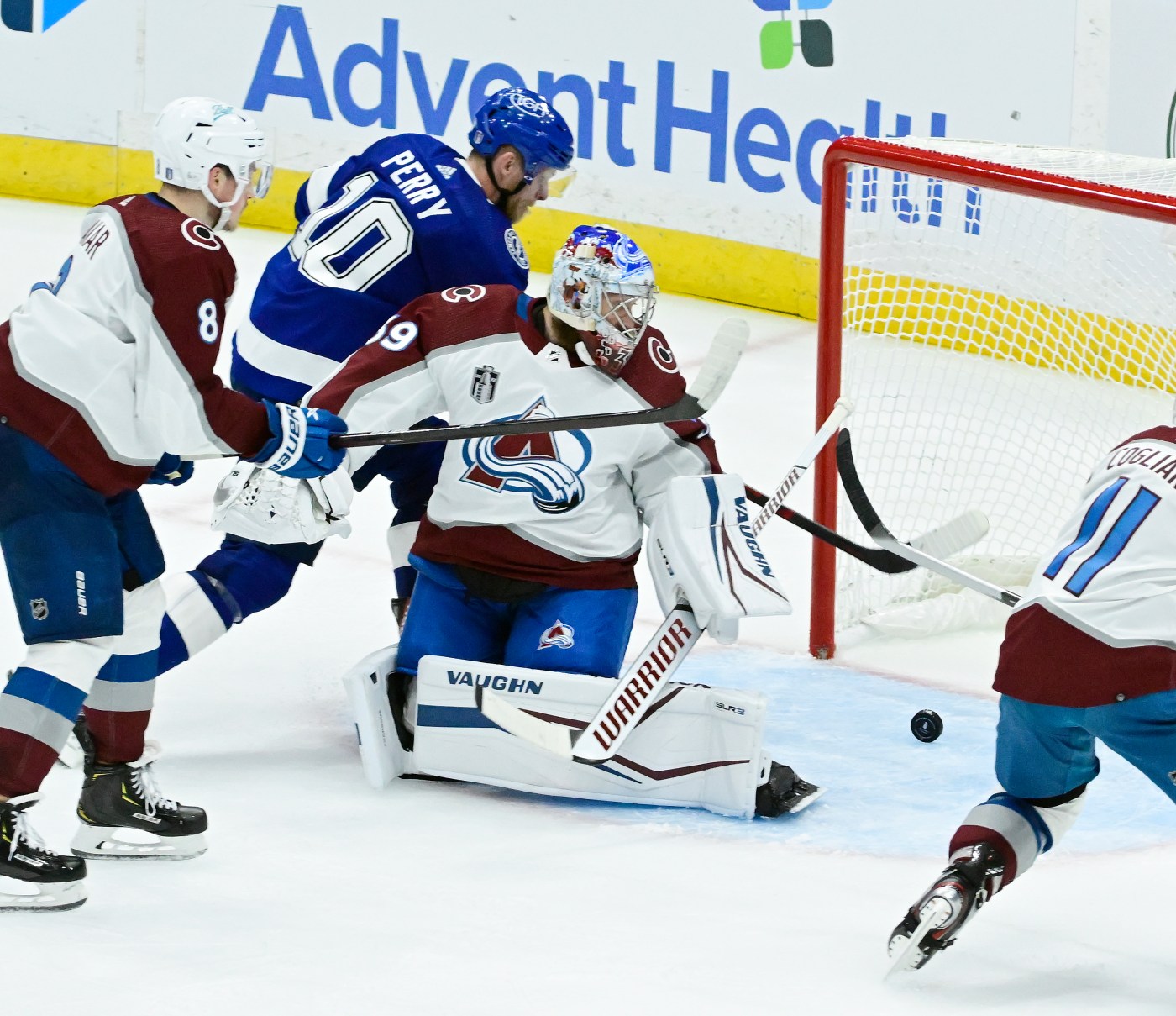 Question: After benching Darcy Kuemper midway through Game 3’s blowout loss, who should Avalanche coach Jared Bednar turn to between the pipes in Game 4: Kuemper or Pavel Francouz?

Ryan O’Halloran, sports reporter: Hey Kiz, I heard you and Patrick Roy had a ton of good conversations back in the day. Do you have his phone number to ask him to put on the goal pads for Game 4? The Avs have made it this far (two wins from the Cup) by combining a dynamic offense with just-fine goaltending. But Darcy Kuemper wasn’t fine in Game 3, getting yanked after allowing five goals. But I would stick with him for this game for two reasons. 1. The Avs will play better defensively in front of him, giving him a chance to succeed. 2. Pavel Francouz has performed well when taking over mid-game if it comes to that. I think Bednar sticks with Kuemper.

Mark Kiszla, sports columnist: Kuemper looks lost between the pipes. His lack of confidence has resulted in the puck playing him, rather than Kuemper taking control of the blue paint. Outside of Game 2, when he could’ve made those 16 saves from a rocking chair during a 7-0 blowout victory, Kuemper’s rate of stopping the puck in the Stanley Cup Final is an abysmal 82.2% on 45 shots. Whether that’s a result of lingering effects from a serious eye injury or a slump at the worst possible time, I think it would border on irresponsible for Jared Bednar not to make the move to Francouz. A harsh evaluation? Perhaps. Could changing goalies plant a seed of doubt in the locker room? Certainly. But a coach’s No. 1 duty is to put his team in the best position to win. And it’s hard for me to imagine how Bednar can truly trust Kuemper at this crucial juncture.

Sean Keeler, sports columnist: My heart says roll with Frankie, turn the page and give the people what they want. But my head says that you get back on that horse with Kuemper. Why? A year’s worth of precedent, for one thing. During the regular season and the playoffs, Mount Darcy got torched for five-plus goals six times. In the six appearances immediately after those stinkers, he surrendered 12 goals total, or just two per game, while the Avs went 5-1. For another thing, it’s psychological — Kuemper’s been your No. 1 for 95% of the season, while Francouz is already familiar (and more comfortable) with coming off the bench in relief if things go off the rails again. Your defense has to be better — way better — in front of the crease than it was Monday, when a series of mental errors opened up easy looks for the Lightning. Fortunately, the mental stuff is fixable. But if you bench Kuemper now, the dude might not be.

Mike Chambers, Avs beat writer: Jared Bednar was coy on Tuesday when asked if he would lean to what has worked all season — Kuemper is 6-foot-4 …read more

Three Stars 1. Andre Burakovsky, LW, Avalanche — Another night, another hero. The big Austrian sent a packed house home happy with a wrister that squeezed past Tampa Bay goalie Andre Vasilevskiy’s left and just inside the right post for the game-winner 83 seconds into overtime. Yet again, the Avs’ depth comes up big on […]

Mike Preston’s Ravens observations on a versatile offensive line, rookies getting in shape, a Kyle Hamilton comparison and more | COMMENTARY

The Ravens have a lot of flexibility on the offensive line, but it’s hard to determine how good this group can be. The Ravens have so far had three weeks of voluntary practice and a few days of mandatory minicamp, so it’s a good time to experiment. They have shuffled a lot of players around, […]

There have been swings that hinted this was on the horizon, an eventuality Adley Rutschman would eventually achieve if fans were patient enough to wait. Well, the wait is over. The Orioles catcher hit the first home run of his major league career in the fourth inning Wednesday night against the Toronto Blue Jays, crushing […]