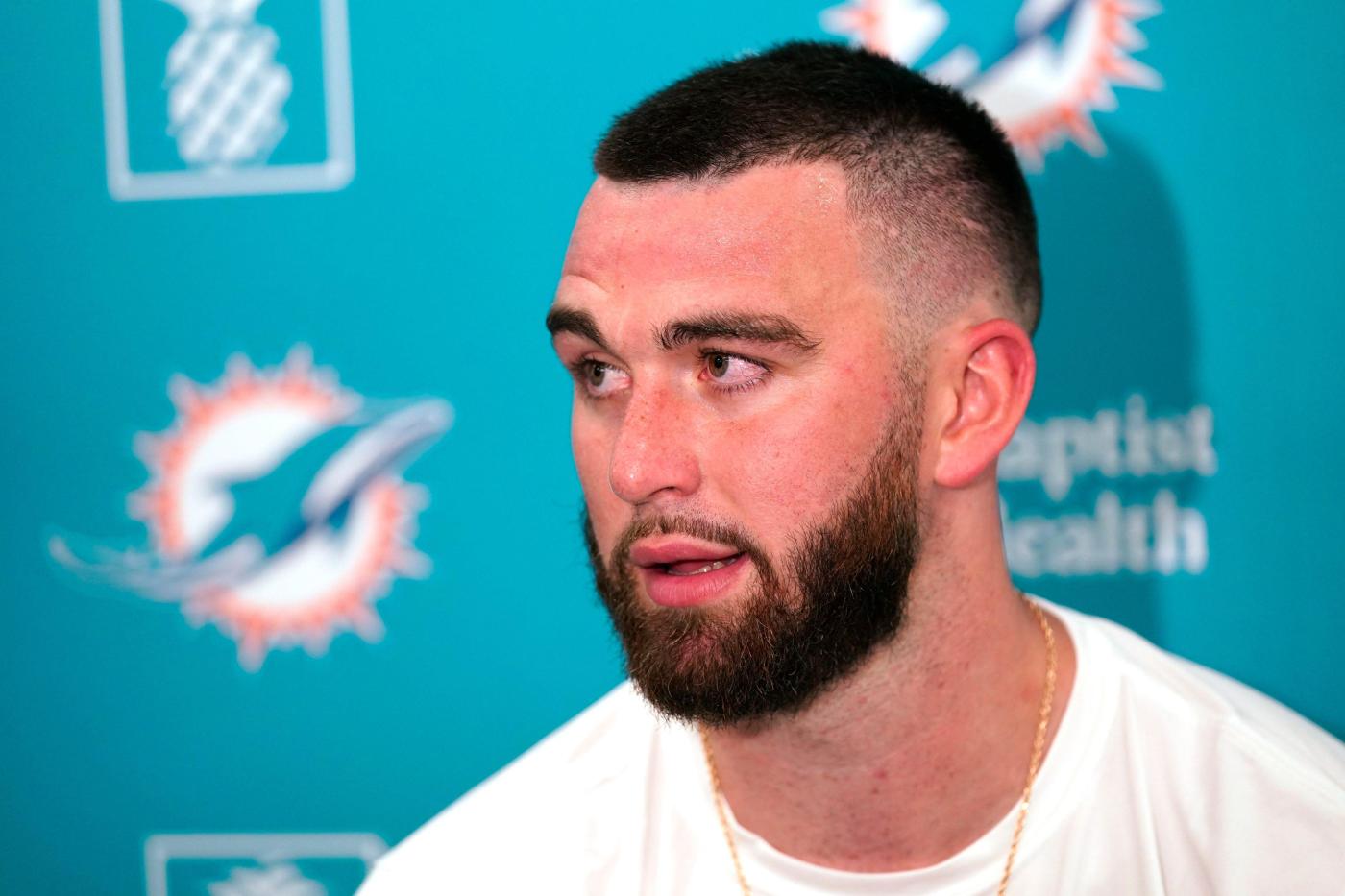 Miami Dolphins quarterback Skylar Thompson hadn’t met Tua Tagovailoa, Tyreek Hill or Jaylen Waddle upon completion of his first rookie minicamp practice Friday, but he did have a quick interaction with a Dolphins legend.

As he walked out to the practice field for that initial session, Hall-of-Fame quarterback Dan Marino, who is now in Miami’s front office, was there to greet him.

“It was just a welcome, getting to know me a little bit,” said Thompson, the Kansas State alum who was taken in the seventh round of the draft by the Dolphins. “I was heading out to practice, so it was very quick passing by. Just said hello, and he said he’s getting ready to get to know me and work with me a little bit. That was cool.”

Thompson, mature for a rookie as he will turn 25 next month, then had the all-time great watching drills as he threw his first passes in a Dolphins practice jersey shortly after signing his contract Friday morning.

“It’s very surreal,” Thompson said. “Obviously, one of the NFL greats, being able to be present. Got to meet him, and [quarterbacks coach Darrell Bevell] was saying that he comes around and hangs out and watches film. We can have access to ask him a question, whatever the case may be. That’s a great tool to use, and I plan on using it.”

Thompson comes to the Dolphins understanding his role. He’s not expected to put up Marino-type numbers — just support Tagovailoa and veteran backup Teddy Bridgewater as he and Chris Streveler will compete to be the team’s No. 3 quarterback.

Thompson came out to Miami initially after getting drafted to tour the team’s facilities, meet people in the organization and get his playbook. He went back to Kansas City and moved out from his place at K-State before returning to South Florida on Thursday ahead of Friday’s first of two minicamp days of on-field work.

“The past two weeks have been a whirlwind,” he said, “but I’ve also been diving into the playbook and learning that to where I can be prepared to come in here and have a good camp and good start here. It’s been very busy. Time’s just flying by. Busy’s good.”

It helps Thompson that he has familiarity with many of the elements of new Dolphins coach Mike McDaniel’s offense. The Wildcats, primarily in a West Coast offense, did a variety of things offensively, including 50-50 work in shotgun and under center. Thompson also has familiarity with the play-action pass, run-pass option (RPO) and calling plays in a huddle, which many college teams don’t do.

“First and foremost, you got to …read more

The Boston Celtics found themselves with NBA playoff math working in their favor Thursday. Although guard Derrick White left the team for the birth of his child, the Celtics got guard Marcus Smart and big man Al Horford back in their mix for Thursday night’s game against the Miami Heat at FTX Arena. Smart had […]

Ravens rookie RB Tyler Badie is back where he started: ‘That was me over there’

Standing on the Ravens’ indoor practice field Friday, running back Tyler Badie smiled as he remembered where he’d gotten his start. “Down the street,” he recalled at the team’s rookie minicamp. “That was me over there.” The sixth-round pick spent most of his childhood in Randallstown. He rooted for the Ravens. He went to an […]

The Miami Dolphins aren’t done adding talent to the roster this offseason, and they just landed a three-time Pro Bowl pass rusher. Melving Ingram is signing with the Dolphins, according to a league source on Sunday. Ingram, who can play both defensive end and outside linebacker and visited Miami in April, has made his mark […]