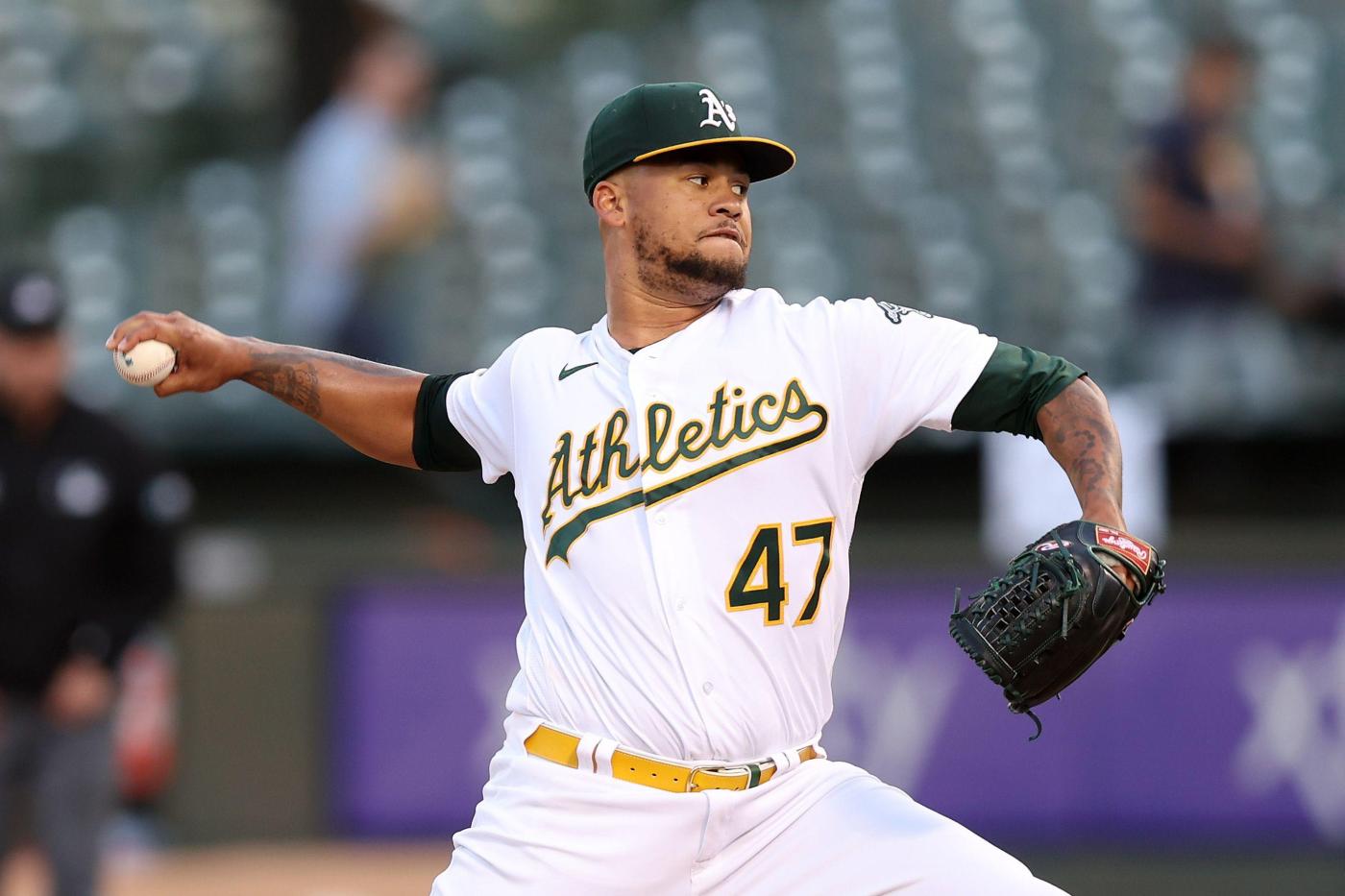 ST. LOUIS —  The Yankees’ newest starter, Frankie Montas is scheduled to make his Yankees debut Sunday. He had still not joined the team before batting practice on Saturday.

“I’m hoping we’ll see him tonight at some point, whether it’s at the hotel or whatever,” Yankees manager Aaron Boone said. “So he’s got with our people a little bit and we were able to see his bullpen and things like that. And we know what he’s been doing as far as it’s been getting his catch play in so everything’s in line to pitch.

“And hopefully, we’ll get to meet him a little bit tonight.”

The Yankees acquired Montas from the A’s with Lou Trivino on Monday. The right-hander was diverted to his home in Arizona when his wife’s mother passed away, so he has not yet met any of his teammates, or even the catcher he will work with on Sunday. Boone hopes that Montas will be able to sit down with Jose Trevino and go over the game plan Saturday night.

“We’ll get Trevi with them tonight though. Make sure they connect,” Boon said. ” And we’ll do what we gotta do to get with him. We feel like we’re we’ve had a ton of conversations. We’ve been in contact with them. He’s been very so I feel like we’re as good as s spot  as we can be with not having him here yet. But yeah, a little (unusual).”

Montas has not pitched since July 26 and he was limited in his last two starts after suffering shoulder inflammation. While the Yankees said they drilled down on the medicals before making that trade, and had a scout watching his starts after he left his early July start with the issue, they still have to be careful with him.

In that July 26 win over the Astros, Montas went just five innings and threw 78 pitches.

“He’s not built up. He’s had two outings where I think he went 53 and then 70 something, so I don’t even think I’d go that far with him, especially with tomorrow will be his 10th day since his last outing,” Boone said. “So we’ll definitely be shorter with him tomorrow. So probably be a couple to get them built up back to that full starter workload.”

Anthony Rizzo, who was scratched with lower back tightness right before first pitch on Friday, was not in the lineup again on Saturday.

“He’s better, but obviously not in the lineup,” Boone said of the first baseman. “I was actually just talking to him and he said  it doesn’t feel like the last time where he missed w four days for so. I am  not saying he won’t, but he doesn’t feel like it’s like that.

“So he’s better today but we’ll just see where we’re at the end of the day today and tomorrow.”

Rizzo missed four days with back spasms last month. At the time, the 34-year old said it was an issue he usually had one a year. This is the …read more

The Rockies’ road to postseason perdition has been all too familiar this summer. Respectable within in the friendly confines of Coors Field, the Rockies turn punchless once they leave the thin air of the Front Range. While they did land a few haymakers in Tuesday night’s series opener at St. Louis, including three RBIs from […]

Former NFL wide receiver Demaryius Thomas died from “complications of seizure disorder,” according to an autopsy released Friday. Thomas’ death in December 2021 at age 33 stunned NFL fans who watched the longtime Denver Broncos receiver for 10 years in the league. Thomas was 16 days shy of his 34th birthday. A cousin suspected that […]

There was one play in the Miami Dolphins’ Saturday practice where the defense brought more pass rushers than the offense had blockers. Quarterback Tua Tagovailoa, as soon as he took the shotgun snap, had to get the ball out of his hands, and it resulted in him throwing almost blindly to a spot over the […]