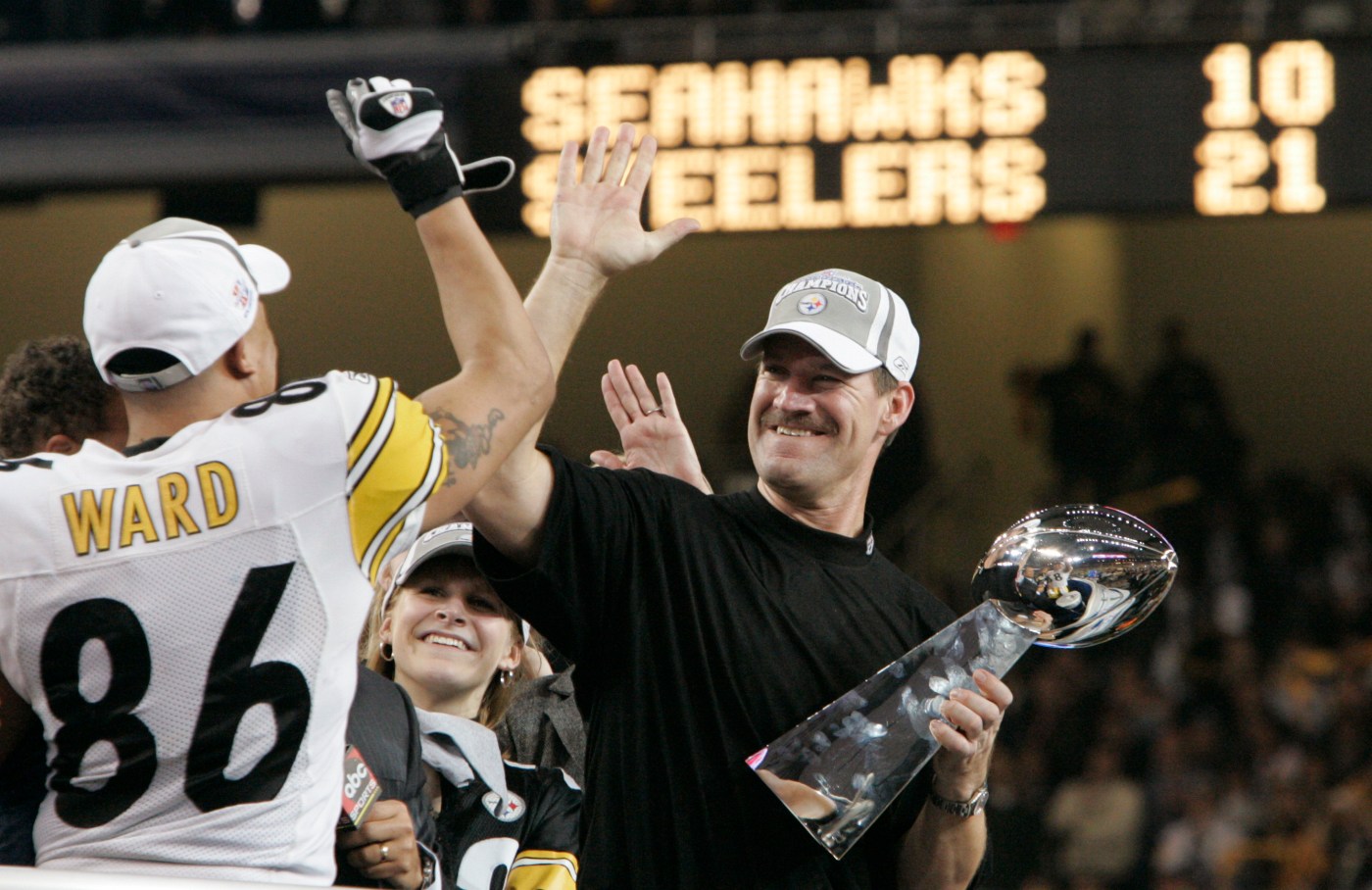 Hall President and CEO David Baker delivered the news live in studio to Cowher, an analyst for CBS, during the network’s “The NFL Today” pregame show broadcast.

“This isn’t right that this is happening right now, but …” a grinning Cowher told Baker, who then officially welcomed the former coach into this year’s Hall of Fame class to be inducted this summer.

An emotional Cowher, now 62, hugged Baker and then his wife Veronica and daughter Meagan, who were standing off to the side of the set during the announcement. The rest of Cowher’s CBS broadcast team, including James Brown, Boomer Esiason, Phil Simms and Nate Burleson also gave him congratulatory hugs.

They all l ater held up black T-shirts with “Hall of Fame” and “Bill Cowher” in gold letters.

Cowher was the coach of the Steelers for 15 seasons from 1992 to 2006, and led them to 10 playoff appearances including two Super Bowls and winning one — beating Seattle in 2006. His Pittsburgh teams won nine division titles.

“Football is a total team sport,” Cowher said while fighting back tears. “I had some great players, some great coaches, the best organization in football. I’ve lived a blessed life. I’ve come to the best network on TV. It’s a family here, like it was a family that we had there.

“And to have to give back just something to the game of football, that’s been a part of my life, the virtues that it teaches you, the morals that you have the obligation to move on, the platforms that we have, you know, I’m a blessed man and I’ve been very blessed to have been surrounded by some very special people.”

The centennial slate includes 10 “seniors” (players who last played more than 25 seasons ago), three “contributors” (an individual other than a player or coach) and two “coaches” (who last coached more than five seasons ago) and were voted on from a list of 38 finalists. The remainder of the 15-person centennial slate will be revealed live on “Good Morning Football” next Wednesday.

The Hall’s overall class will consist of 20 members, including an additional five who will be added the day before the Super Bowl, when the modern-era player finalists are voted on by the Pro Football Hall of Fame selection committee.

Jacob Kupferman, Getty ImagesJavon Kinlaw of the South Carolina Gamecocks warms up before their game against the Appalachian State Mountaineers at Williams-Brice Stadium on Nov. 9, 2019 in Columbia, S.C. Another mock draft, another different pick for the Broncos. In USA Today’s Luke Easterling three-round NFL mock draft, the Broncos are picking South Carolina defensive […]

How bad is ankle issue that kept 49ers’ Kittle from practice?

*** Instant reaction to developments on and off the field, and court. (For a subscription to the free Hotline newsletter, click here.) … 1. Player of the Year? No doubt. We had planned to devote the first item in Saturday Night Five — a prime piece of real estate in the Hotline’s world — to […]