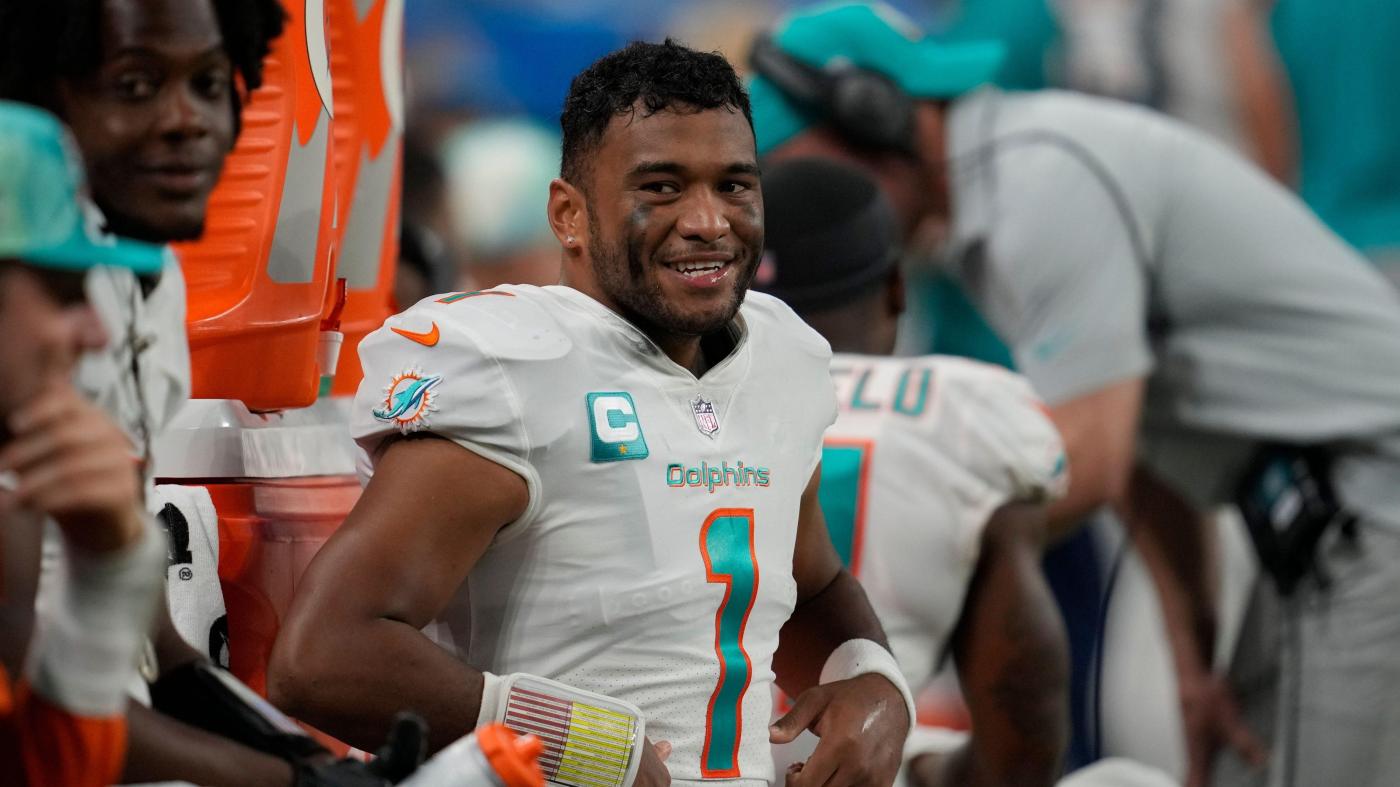 Miami Dolphins quarterback Tua Tagovailoa has plenty to be thankful for this year.

Beyond stringing together the best three games of his career before Thanksgiving and the Dolphins’ Sunday matchup with the Houston Texans, Tagovailoa and his wife welcomed a baby boy, Ace, to the world in recent months.

For Tagovailoa, fatherhood has offered him a fresh perspective.

“It’s very unique how having a child impacts how you see things differently in life,” Tagovailoa said. “It’s like nothing that I’ve ever experienced. There’s no playbook for this.

“I’ve always had a tremendous amount of heart for kids, but now that I have one of my own, you go home and the best thing is when you see them smile and laughing. It’s the best thing in the world.”

And Tagovailoa is thankful that his first crack at being a dad is with a son.

“I thank my Heavenly Father up above that I got a boy first,” he said laughing. “Oh, man. I don’t know what I’d do if I had a girl. It’d be a little harder, I think, because I wouldn’t know what to do necessarily.

“Having been around cousins that have had kids that were boys, it kind of makes it a little easier that I have a boy myself with my wife.”

Tagovailoa mentioned the rest of his family, his parents, siblings and wife, as well. He said he’s thankful for his Dolphins teammates, coaches and support staff.

As Tagovailoa has played three consecutive games with a quarterback rating of 135.0 or better, the three best outings of his career, the offseason addition of wide receiver Tyreek Hill and coach Mike McDaniel’s offense can all be attributed as factors for his improved play in Year 3. But longtime offensive coordinator and quarterback guru Darrell Bevell, Miami’s quarterbacks coach who took in Tagovailoa this offseason, also should be credited for his improvement.

“Very detail-oriented,” said Tagovailoa of Bevell. “My relationship with Bev has really grown a lot.”

Right around when Tagovailoa got hot over the past three games, he had Bevell and his family over to his house to watch a movie and have dinner.

“[He has a] great family,” Tagovailoa said. “I think having someone of his personality where, regardless of how cool you guys are, if you’re not on top of your stuff, he’s going to let you know. That’s kind of the relationship that I would say I have with him.”

McDaniel constantly evolving the Dolphins offense over the course of the season has also allowed Tagovailoa to flourish.

“A lot of things are new in our passing game and in our running game and our play-action game,” Tagovailoa said. “He’s always working on things that can grow the offense and help the offense, so there’s a lot of nuances.”

When Ace Tagovailoa grows older, Tua Tagovailoa may one day tell him how a key season for his career development came after the Tagovailoas brought him into the world.

Following the team’s bye week, the Dolphins (7-3) remain a 7-0 in games where Tagovailoa has started and come away healthy. …read more

Typically, the Miami Heat minimize conversation about injuries and injured players. The franchise of “we have enough” tends to be more focused on making do with what is available and making inroads from there. But after an 0-4 trip that featured three crushing tight losses and one sobering blowout defeat, coach Erik Spoelstra essentially issued […]

The Orlando Magic (5-16) will be significantly healthier for Wednesday’s home game vs. the Atlanta Hawks (11-10). Guards Markelle Fultz will be available to make his season debut while Cole Anthony will be available to return against the Hawks, a league source told the Orlando Sentinel Tuesday morning. Terrence Ross, who missed Monday’s 109-102 loss […]

10 thoughts after the Chicago Bears hung in there with the New York Jets through a rain-soaked first half Sunday at MetLife Stadium, then got blown out as injuries and miscues piled up in a 31-10 defeat. It was the Bears’ fifth consecutive loss and eighth in nine games. 1. Leave it to the Bears […]