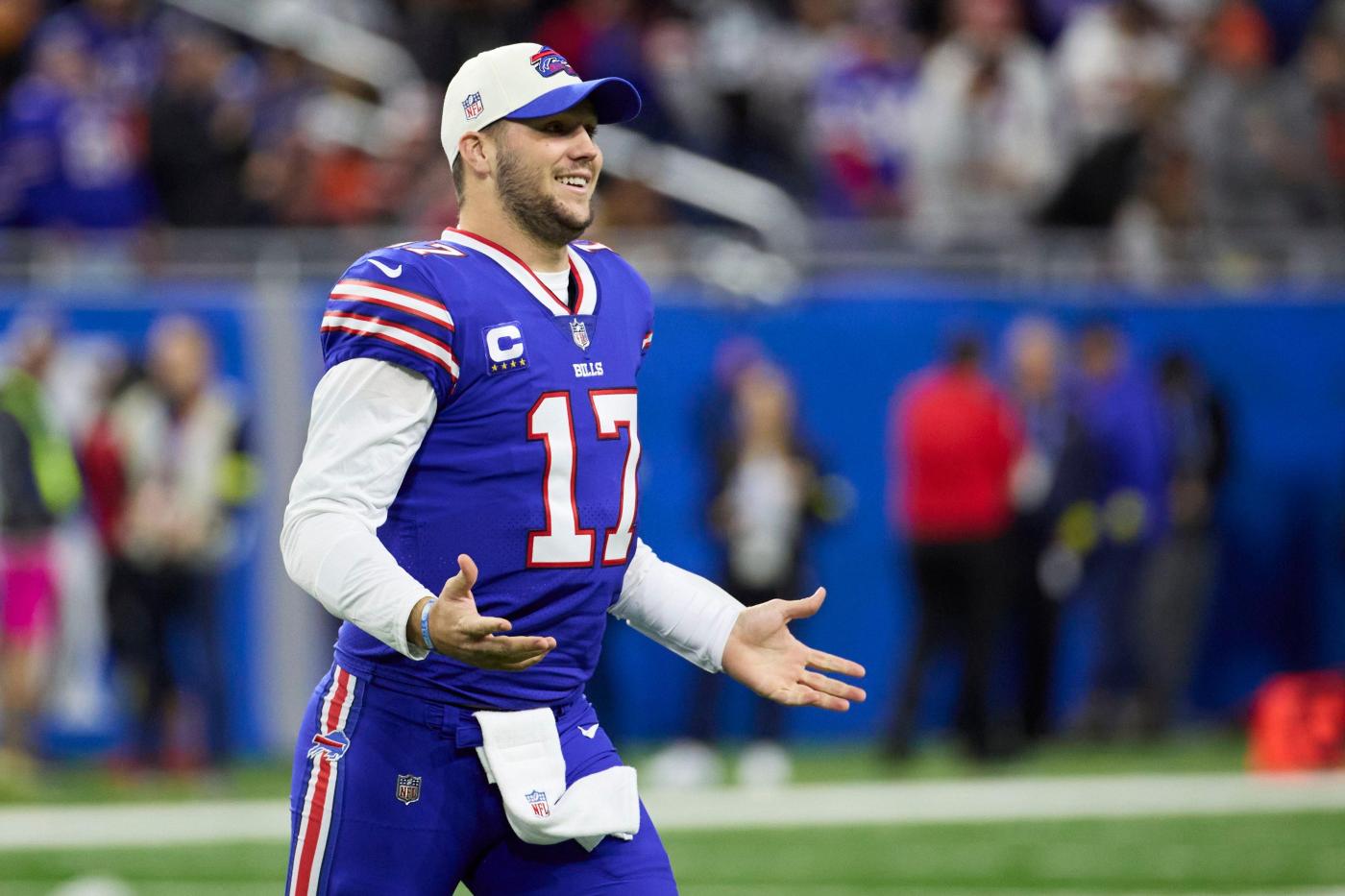 The first NFL Thanksgiving Day game was in 1934 between the Detroit Lions and the Chicago Bears at the University of Detroit Stadium. It was a sellout crowd with 26,000 fans attending, and a tradition was born. The Lions have played on Thanksgiving ever since, except for 1939-1944 during WWII. The Dallas Cowboys were the second NFL team to play annually on Thanksgiving, way back in 1964. The Jacksonville Jaguars are the only NFL team to never play on Thanksgiving. The Ravens, Texans and Panthers have never lost on Thanksgiving, while the Browns, Bengals and Buccaneers have never won. The Lions have a losing record on the day (37-42-2), but the Cowboys are 31-23. The most famous play on Thanksgiving of course was the Patriots-Jets game featuring the Butt Fumble in 2012. Sorry to remind you, Jets fans. As we look at our Giddy Ups! and Whoa Downs! for Week 12, make sure to check the NFL injury reports before submitting your lineups.

Josh Allen, QB — Allen played timidly against Cleveland last week, his worst Fantasy outing (14 points) in three seasons. Has he lost his mojo after a slew of red-zone interceptions cost Buffalo two wins? No way. On Thanksgiving against the surging Lions, Josh will throw deep and with confidence.

Jacoby Brissett, QB — This will be Brissett’s last outing before the re-instated Deshaun Watson takes over at QB. Brissett acquitted himself well all year, including last week against the Bills (324 yards, 3 TDs). I think he’ll go out on a high note at home against the Buccaneers.

Dameon Pierce, RB — Pierce’s eight carries for 10 yards were a huge disappointment last game against the Commanders but keep the faith. It was his first poor outing as the starter for Houston. Miami gives up 13 Fantasy points to RBs per outing, which is slightly less than Pierce’s 14.6 per game average.

Damien Harris, RB — Harris has become the “thunder” to Rhamondre Stevenson’s “lightning.” Both should fare well against the Vikes on Turkey Day, who just gave up a combined 58 points to RBs Zeke Elliott and Tony Pollard.

Tyler Lockett, WR — Lockett has scored three games in a row and stands a shocking 12th in Fantasy points for wideouts. But his starting percentage in Fantasy leagues is an even more shocking 60%. Get him off your bench and into your lineup.

Russell Wilson, QB — Are you as tired of Wilson as I am? He was my favorite Giddy Up! from last week, but he stunk up the joint with 10 Fantasy points. He can’t be trusted even against the …read more

Cowboys owner Jerry Jones said Tuesday that he is not concerned about free agent wide receiver Odell Beckham Jr. visiting the Giants and Buffalo Bills before he heads to Dallas as early as next Monday. “Not at all,” Jones told 105.3 The Fan in Dallas. “As a matter of fact, if you look at what […]

Why Broncos defense is sick of being told they look tired: “I just don’t believe in excuses.”

Did they bend? All over the place. Especially late. But safety Justin Simmons doesn’t buy the argument that the Broncos defense might already be broken from all the weight that it’s had to carry so far this season. “I wouldn’t say (we’re getting) ‘tired,’” Simmons told The Denver Post during preparations at UCHealth Training Center […]

Three keys to a Jets win over the Bears

1. GET GROUND GAME ESTABLISHED All eyes will be on Mike White, as Sunday will be his first start of the 2022 season. However, the Jets need to get the rushing attack going to take pressure off White and the team’s passing game. In the 10-3 loss against the Patriots, the Jets only rushed for […]