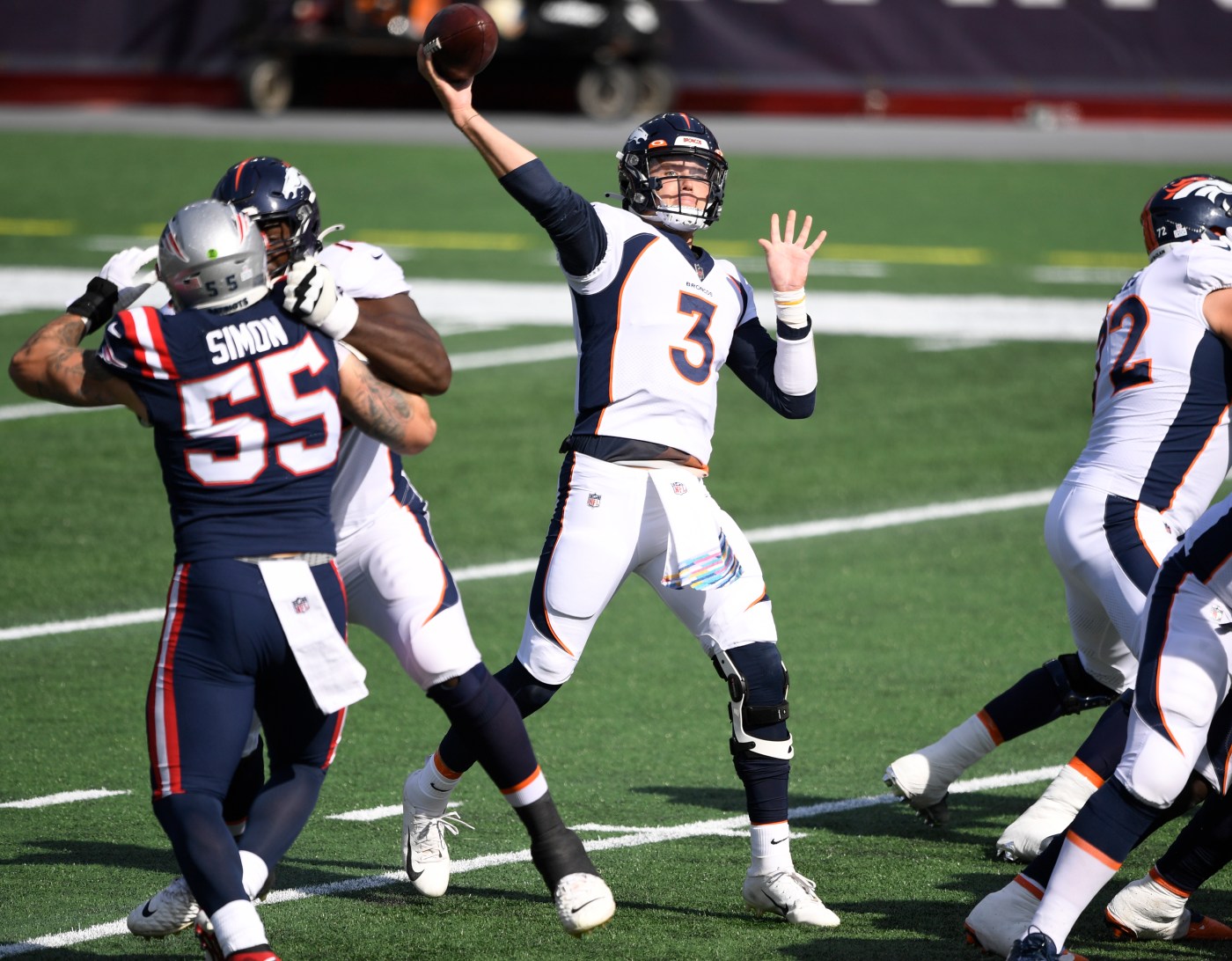 Granted, the stat line was about as pretty as the roadkill along I-70. And yes, we know the first interception of the fourth quarter had you reaching for the Pepto. And the second one had you grasping for something stronger.

Broncos fans, we don’t blame you for spending the last six minutes of Sunday’s Broncos-Patriots game crawling up the dang well, convinced Drew Lock had thrown this puppy away.

“(I was) very anxious,” Lock said after leading Denver to a COVID-delayed, season-shifting 18-12 win at New England on Sunday afternoon. “You know, that’s just our offense, though. We’re going to take the shots when they’re there.”

The numbers say Buzz Lightyear misfired. A lot. The former Mizzou standout completed just 10-of-24 throws for 189 yards, zero scores and two picks, both in the fourth quarter. He was intercepted on back-to-back plays to help the hosts turn a defensive slugfest into a nail-biter.

But if the glass was half — well, half-something, here’s the half-full version of Week 6:

• At least five of those incompletions were drops, balls that doinked off a forearm, a finger, or both.

• Three of those drops came in the end zone on catchable balls. One came off the mitts of Jerry Jeudy and another two were by dropped by Lock’s old college teammate, tight end Albert Okwuegbunam.

• You won in New England. You beat a Bill Belichick team at Gillette Stadium. Lock is in his second full year with the Broncos. But in terms of game experience, he’s still more or less an NFL rookie. Belichick has never lost to a rookie quarterback at home as the coach of the Pats. Belichick hasn’t lost to a first-year signal-caller anywhere on the planet since 2013.

• Because of the Pats’ coronavirus circus, Belichick and his staff had two weeks to prep for the contest, even if they were preparing without a full complement of players, and rarely practiced. (And it showed.)

• Bill Belichick is 0-1 against Drew Lock.

Pretty? No. Satisfying? Given everything?

“I thought he looked good out there. And when I say that, I just thought he looked comfortable. He didn’t look like a guy coming back from an injury. He wasn’t tentative. He was out there playing football the way we want him to play.

“Obviously, the interceptions, we don’t want to have. One was, I believe one was a miscommunication. I’ll look at the other one on tape. But I think it’s a great learning experience for him and the entire team. And hopefully we’ll be better prepared to close out the next time we get a lead like that.”

More from the half-full side: Lock didn’t report any discomfort following the game — “I felt good,” he said — when asked about some of the shots he took, especially to the right shoulder. Granted, he also danced around one of the …read more

SEATTLE — Not that he needed to provide the endorsement, but in the midst of talking about his start of the season, DK Metcalf threw his support behind a growing candidacy. “Russ for MVP, 2020,” Metcalf proclaimed. He’s of course speaking of Russell Wilson, the quarterback for the Seattle Seahawks and one of the clear […]

KANSAS CITY, Mo. — Derek Carr threw for 347 yards and three touchdowns, outplaying Super Bowl MVP Patrick Mahomes along the way, and the Las Vegas Raiders nearly shut out the potent Kansas City offense in the second half to rally for a 40-32 victory Sunday that ended the Chiefs’ franchise-record 13-game winning streak. Josh […]

SAN FRANCISCO — Fred Dean, the fearsome pass rusher who was a key part of the launch of the San Francisco 49ers’ dynasty, has died. He was 68. His death on Wednesday night was confirmed Thursday by the Pro Football Hall of Fame in Canton, Ohio. Dean was hospitalized last week with the coronavirus and […]