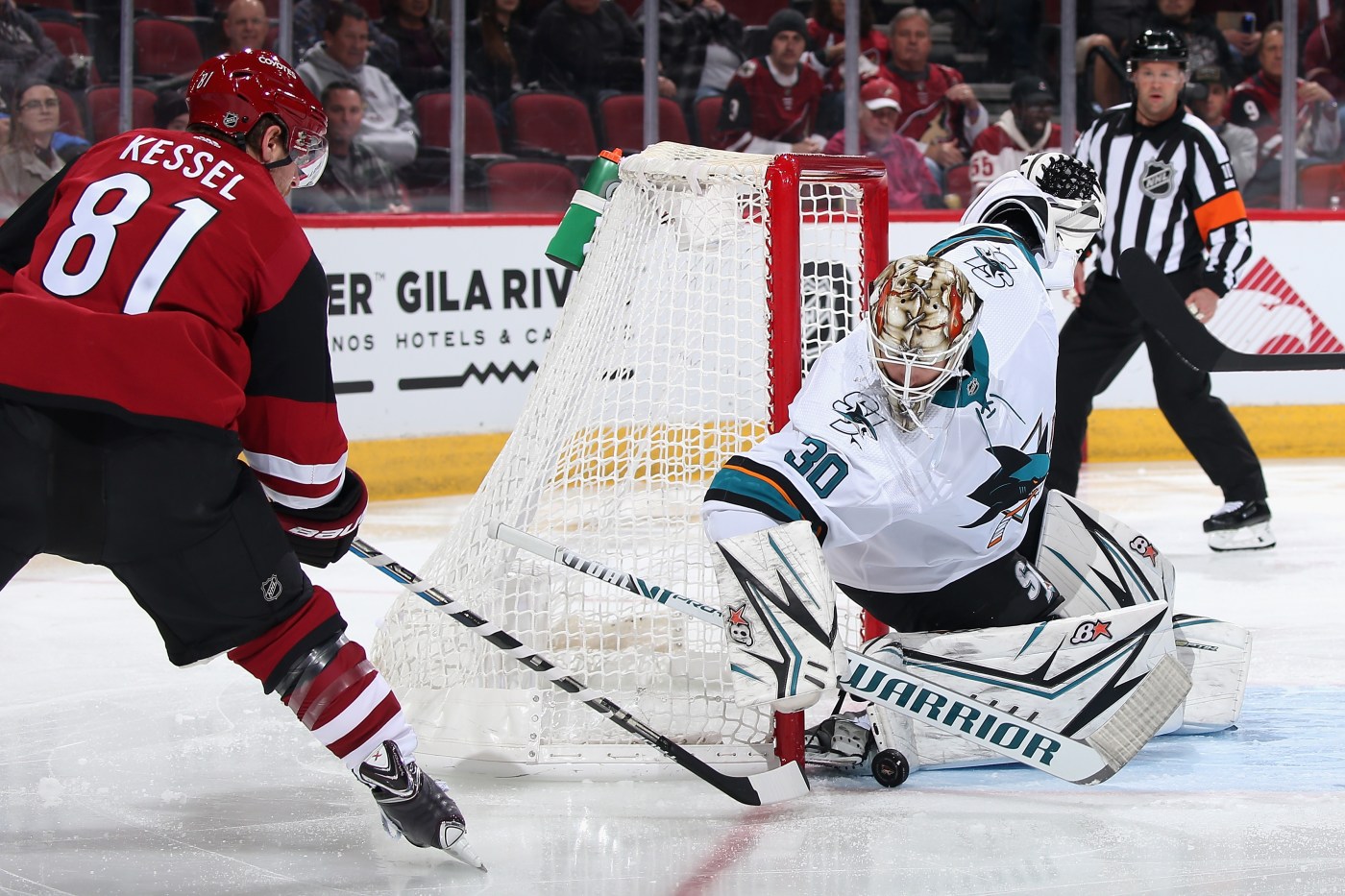 The tight, defensive brand of hockey the Sharks played with on their two-game homestand last week didn’t make it to Gila River Arena on Tuesday.

The Sharks allowed two goals by Phil Kessel and another to Taylor Hall in the first two periods as their three-game road trip began with a 6-3 loss to the Arizona Coyotes.

Kevin Labanc and Timo Meier both scored in the second period and Evander Kane scored with 2:09 left in the third period, but the Sharks could not avoid their third regulation time loss in their last 10 games since the Christmas break.

Kessel also assisted on Lawson Crouse’s goal at the 8:09 mark of the third period, and Connor Garland and Hall both added an empty-net goals in the final 1:40 to seal the Coyotes’ win.

After going 2-2-1 on their road trip from Dec. 31 to Jan. 7 — a trip that ended with an ankle injury to Logan Couture — the Sharks returned home to beat Columbus 3-1 on Thursday and Dallas 2-1 on Saturday. The victories marked the fifth and sixth times the Sharks had allowed two goals or fewer in eight games since Dec. 28.

But goalie Aaron Dell, making his sixth start in the last seven games, didn’t get a ton of help from the skaters in front of him as Arizona’s first three goals came on 26 shots. Dell faced nine shots in the first period when he allowed a goal to Kessel at the 12:03 mark, but saw 17 shots in the second when the Coyotes took a 3-2 lead.

Kessel’s second goal came on the power play, set up by a hustle play by Garland, who barely kept the puck inside the Sharks’ zone.

With three Sharks skaters around the puck, Garland found Christian Dvorak to the left of Dell. Dvorak then passed to an open Kessel, who beat Dell for his 11th goal of the season at the 5:01 mark of the second.

The Sharks responded a few shifts later as Evander Kane skated with the puck behind the Coyotes net before he sent a backhand pass in front. The puck found Labanc, who beat Coyotes goalie Adin Hill for his 11th goal of the season at the 6:42 mark.

Shortly after Dell robbed Coyotes forward Clayton Keller with a save on a shot from in close, Antti Suomela took control of the puck and sent a pass through the neutral zone to Patrick Marleau. Marleau then found Meier skating toward the net, and Meier backhanded a shot past Hill for his 16th of the season.

Dell’s save and Meier’s goal looked like it might have the makings of a turning point. But with 2:46 left in the second period, Jordan Oesterle’s shot from inside the blue line was redirected by Hall past Dell.

With the loss, the Sharks remained in 13th place in the Western Conference. They conclude their road trip with games against Colorado on Thursday and Vancouver on Saturday. The …read more

NEW YORK — The Chin is in. Former Pittsburgh Steelers coach Bill Cowher was elected to the Pro Football Hall of Fame in a surprise announcement Saturday night before the Tennessee Titans-Baltimore Ravens AFC divisional round playoff game. Hall President and CEO David Baker delivered the news live in studio to Cowher, an analyst for […]

Report: Brentson Buckner out as Raiders D-line coach in favor of Rod Marinelli

ALAMEDA — Brentson Buckner, who coached one of the most improved position groups on the Raiders in 2019, was reportedly fired Tuesday and will be replaced by Rod Marinelli. Jim Trotter of NFL Media first reported the news. The Raiders have made no announcement about any coaching staff changes. Marinelli, 70, has been the defensive […]